So, the UK parliament couldn’t find a consensus on Brexit last night after MPs voted on eight different options and – lo and behold – there was majority for absolutely none of them.

So, the UK parliament couldn’t find a consensus on Brexit last night after MPs voted on eight different options and – lo and behold – there was majority for absolutely none of them. The proposal for a permanent customs union with the EU came closest at 264 votes in favour and 272 against. With the DUP still refusing to offer their support to Theresa May’s Brexit deal, I just can’t see the light at the end of the tunnel even if some rebel Tory MPs have now suggested they would back a third meaningful vote in light of the Prime Minister’s vow to resign if her deal is passed. But the Speaker has already reiterated that another vote cannot be brought unless it is substantially different.

So, the deadlock continues, and this has raised uncertainty again after hopes had momentarily risen that MPs would find a way forward. The uncertainty has been reflected in the pound turning red on the week overnight against the dollar, euro and yen, although it was still confined within its prior wide ranges at the time of this writing.

In the event the pound goes on to fall further, then the GBP/JPY may be the one to watch. This popular FX pair has dropped to test the upper end of its key support range between 114.00 and 114.60 today. This is where the 200-day moving average, a short-term bullish trend and prior resistance-tuned-support all converge. Thus, a break below this important range could potentially lead to further follow-up technical selling towards the next potential support level at 143.00.

However, if the GBP/JPY recovers and pushes back to a new high on the week above 146.50, then in that case, price could go on to head towards the point of origin of the last breakdown at 147.55, and potentially re-test its descending trend line, which comes in somewhere between 148.00 and 149.00. 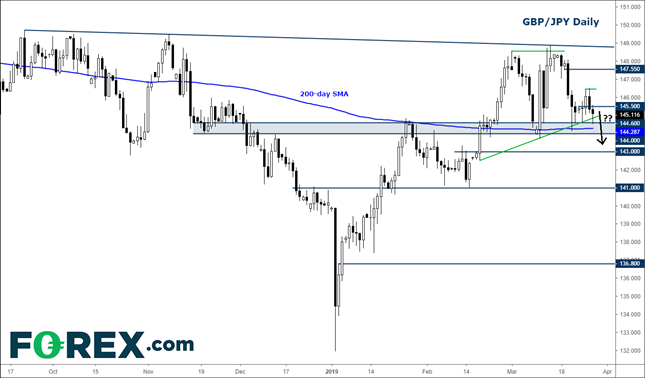