The GBP/USD has dropped to its session lows while the EUR/GBP has hit 0.9000 on the back of news reports that UK Prime Minister Theresa May is going to delay Tuesday’s parliament vote in order to avoid a huge defeat.

The GBP/USD has dropped to its session lows while the EUR/GBP has hit 0.9000 on the back of news reports that UK Prime Minister Theresa May is going to delay Tuesday’s parliament vote in order to avoid a huge defeat. Several ministers have apparently pushed for the delay so that Mrs. May can seek extra clarification from the EU on the backstop agreement. The European Commission spokesperson has said the EU "will not renegotiate" on Brexit agreement.

Earlier, the European Court of Justice ruled the UK can cancel Brexit without the permission of the other 27 EU members. The decision comes a day before MPs were due to vote on Theresa May's deal for leaving the EU – but this could be delayed, judging by the headlines that have emerged.

Meanwhile, UK economic growth has slowed in the three months to the end of October. There was a sharp drop in manufacturing output although this was partly offset by a growth in IT services.

At the time of writing, the GBP/USD was hitting fresh session lows around 1.2660. As things stand, rates look poised to drop towards the 127.2% Fibonacci extension level around 1.2490 over time, although with the dollar weakening against other currencies, we wouldn’t be surprised if price creates a false break pattern here. After all, the above news was partially priced in. 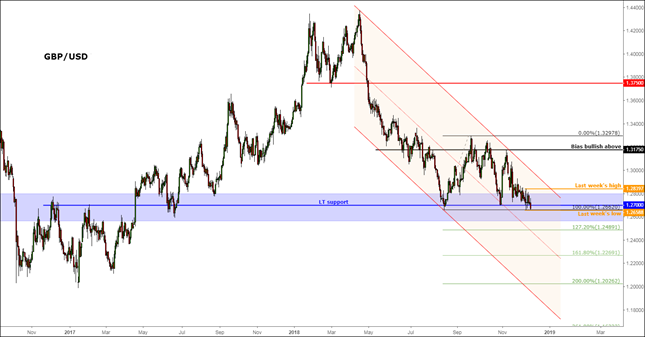