Canadian CPI still high, but does it matter today ahead of FOMC?

Watch for volatility after the FOMC statement and press conference, particularly in USD/CAD!

Inflation is at the forefront of everyone’s minds these days.  Canada released their CPI data for May earlier. The headline print came out as expected at 3.6% YoY vs 3.4% for April.  However, the Core CPI was stronger than expectations, at 2.8% vs 2.5% expected and 2.3% for April.  Recall that at the Bank of Canada left their bond purchasing program unchanged last week at C$3 billion per week.  Today’s report confirms what we already knew:  inflation is high while employment is low. The last 2 Employment Change releases for Canada were both worse than expected.  However, with June’s payroll data to be released before the next BOC meeting, central bank members are hoping for a stronger print.  Expectations are for more bond purchase tapering at the next BOC meeting on July 14th.

Today’s data from Canada coincides with the same picture we see in the US:  high inflation, worse than expected employment data.  But the US Fed is much further behind the BOC in terms of tapering its bonds purchases.  Currently, the Fed buys $120 billion worth of Treasuries and MBS per month.  Of course, the FOMC’s big decision today won’t be whether they should taper or not, but rather whether they should even talk about tapering!  The Fed has repeatedly said that current inflation is transitory, and that they will let inflation “run hot” while they focus on maximizing employment.  After 2 months of Non-Farm Payroll misses since the last FOMC meeting, will the Fed have enough positive data to allow them to signal that they will talk about tapering?  In addition, FOMC members will release growth and inflation forecasts.  If members expect inflation to be higher than they previously forecast, will that give them enough information to talk about tapering?  See our complete Fed preview from Matt Weller here.

USD/CAD has been the tale of two completely different monetary policies since April 21st.  With the BOC tapering and the US on hold, the Canadian Dollar had been on a one-way train higher.  But is that about to change?  USD/CAD has been moving lower since the pandemic highs in March 2020 in a wedge formation.   When the BOC tapered on April 21st, USD/CAD was at the top trendline on the wedge near 1.2654. Since then, the pair moved aggressively lower as Canadian and US monetary policies diverged.  USD/CAD had a false breakdown below the bottom trendline of the wedge, putting in a low of 1.2007 on June 1st.   Price then traded sideways, biding its time as traders waited for more information.  On Friday, traders began taking profits and covering shorts ahead of today’s FOMC meeting.  Yesterday, price traded to its highest level since May 6th near 1.2204. 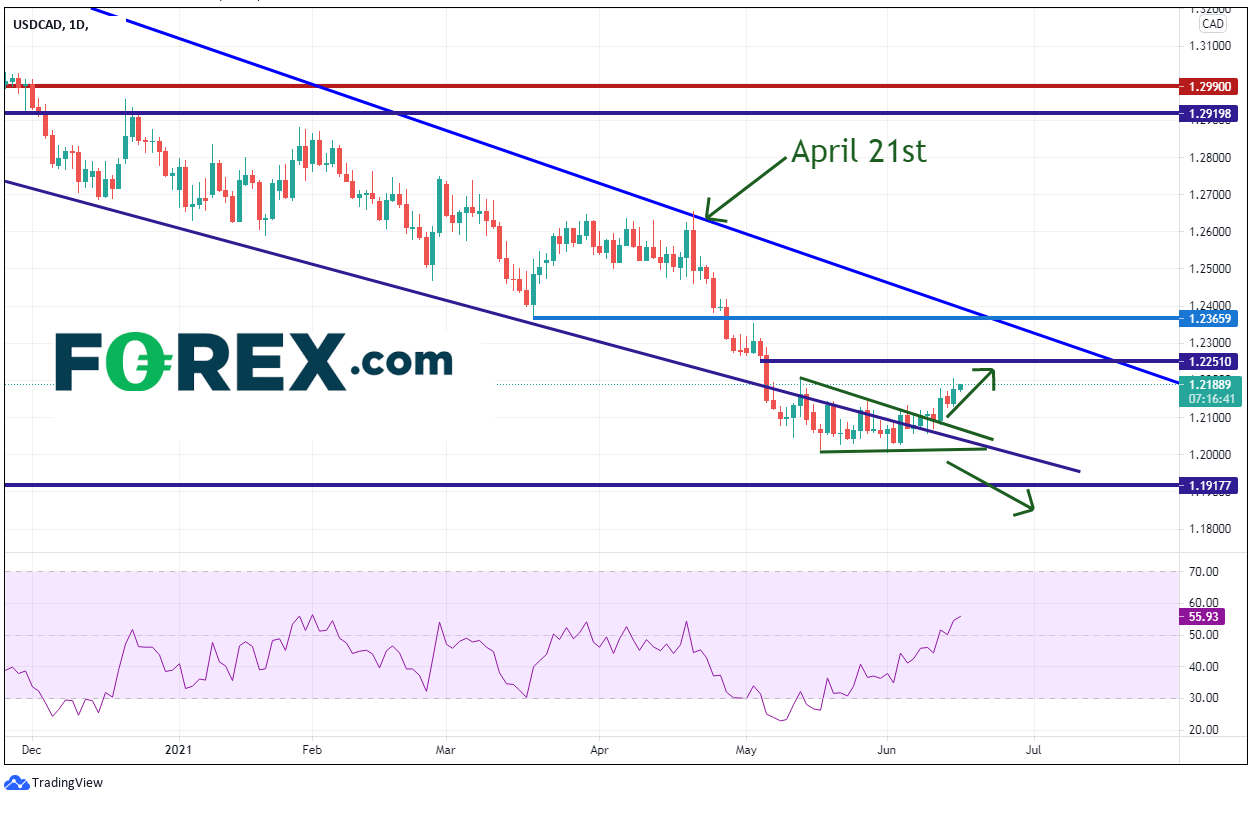 On a 240-minute timeframe, USD/CAD has been moving higher in an AB=CD formation since June 9th, mainly on position squaring ahead of today’s meeting.  USD/CAD ran into resistance yesterday near 1.2200.  The target for the formation is point D, which confluences with horizontal resistance and the 38.2% Fibonacci retracement level from the April 21st highs to the June 1st lows.  Resistance above there is at the 50% retracement level from the same timeframe at 1.2334 and then horizontal resistance near 1.2366.  First horizontal support is at yesterday’s lows near 1.2132, then the June 1st lows near 1.2006.  Below there, USD/CAD can fall to 1.1917, which is the lows from April 2015! With today’s CPI data from Canada confirming what many already knew (high inflation, lower employment), the BOC will need to decide at their next meeting whether they will taper again or kick the can down the road.  However, today the FOMC will get its chance to decide whether they want to signal to the markets that they will begin tapering soon by “talking about it”.  Watch for volatility after the FOMC statement and press conference, particularly in USD/CAD!