The headlines about China lately have been centered around the Coronavirus, and rightfully so!   Depending on who you ask, the rate of increase may or may not be decreasing.  However, the world is at a point where people are a at least beginning to discuss whether a top is in.  Prior to this weekend, all signs were pointing to an increasing rate of cases.  As a result of the Coronavirus, and despite the US-China Phase One trade deal that was signed on January 15th,  the inflation rate (YoY) for China increased to 5.4% vs 4.9% expected and 4.5% in December.  Most of the increase was due to higher food prices, as demand was increased due to the Lunar New Year, and higher pork prices.  In addition, travel restrictions due to the Coronavirus made supply of pork lower, cause prices to rise even further.  As a result, USD/CNH is lower (Chinese Yuan trading higher).

On January 20th, USD/CNH put in a hammer bottom and over the next 2 weeks,  broke out of a falling wedge and traded back near the pivotal 7.00 level.  This level had acted as resistance and support heading back to early Q4 2019, and price has paused near here over the last week.  The 200 Day Moving Average also crosses near this level and is currently at 6.9912! On a 240 minute,  USD/CNH has been in a downward sloping channel since early October 2019.  However, after bouncing off the bottom trendline (the hammer on the daily) price moved to the top trendline of  the channel and is attempting a breakout.  As we previously mentioned, price bounced to near 7.00, 7.02 to be more exact.  This level represents the 50% retracement level from the highs in early September 2019 to the lows from January 20th .  With today’s better inflation data, USD/CNH is trying to putt back into the channel. 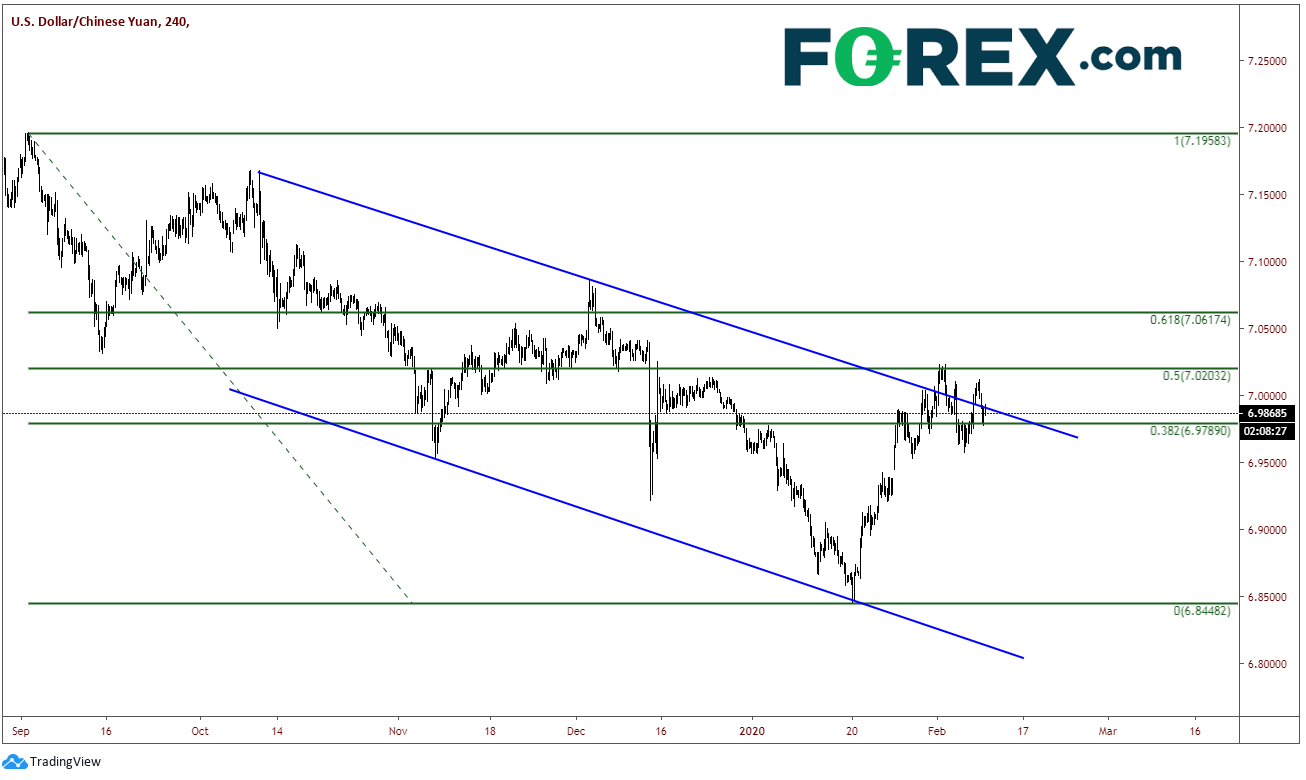 Later this week and early next week, China will release Foreign Direct Investment (Year to Date), Housing Price Index, and Retail Sales.  These will be our first looks at data since the coronavirus outbreak and will paint a better picture of how growth is doing for the beginning of Q1.  If the data is worse,  USD/CNH will probably trade higher.  7.0617 is the 61.8% Fibonacci retracement from the previously mentioned timeframe.  However, if data is worse than expected or the coronavirus is worse than the markets are led to believe, price may trade even higher.  In addition, many of China’s factories were set to re-open today.  It will be interesting to see how many actually opened, and if so, how many people  showed up!