Commodity prices are firmer today with base and especially precious metals ending a bad run off losses, while crude oil has extended its gains from the day before when it rallied sharply on the back of the weekly US oil inventories report.

Precious metals have been supported by a number of factors today, not least profit-taking given the extent of the recent bearish run. In addition, the US dollar’s sharp rally at the start of the week has paused for breath, which in turn has eased the pressure on buck-denominated gold, silver and copper. What’s more, the sluggish start on Wall Street has helped to boost the appetite for safe haven assets, which is why, for example, the Japanese yen has also bounced back along with the metals.

But is this another short-lived bounce for perceived safe haven assets? While it is far too early to make any conclusions, I wouldn’t be surprised to see a rebound in gold and silver, and possibly a stock market correction of some sort.

Meanwhile as far as crude oil is concerned, well it has has found strong support on the back of the latest US oil inventories report. According the EIA, oil stocks fell by a sharp 5.2 million barrel drop for the week ending May 5. This has reduced concerns about excessive supply after the persistent rises in US oil production.  Oil has also found support on the back of persistent jawboning from oil ministers of some OPEC countries about extending the production cuts.

Silver: the commodity to watch

Silver has been falling sharply, very sharply, in recent days. But it has now arrived near a key support area around $16 per troy ounce, or specifically between $15.25 and $16. 65. As can be seen, the metal has bounced from this area several times in the past. Whether or not it will do so again this time is a million dollar question. But with the RSI being at severely oversold levels and sentiment bearish (as indicated for example by large amounts of ETF outflows), it may be time investors started looking at precious metals again, and in particular silver. 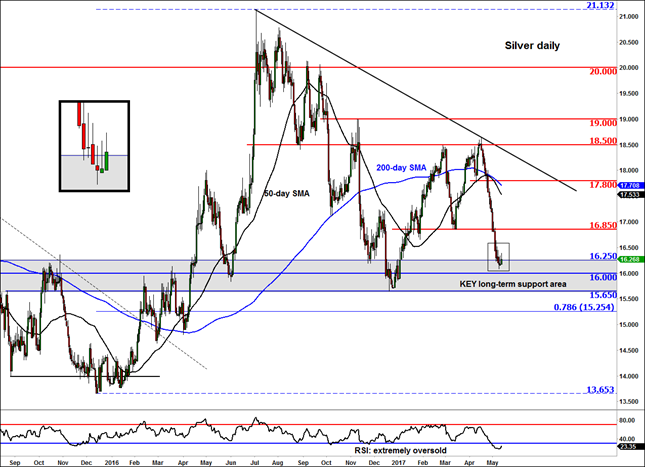