Share:
A trio of significantly better-than-expected purchasing managers’ index (PMI) readings out of the UK late last week and on Monday came in quick succession. Manufacturing PMI for August came in at a 53.3 expansion level against prior expectations of a 49.1 contraction. Construction PMI was still in contraction at 49.2, but better than the 46.6 expected. Finally, Monday’s services PMI showed a 52.9 expansion versus the 49.1 contraction forecast. Overall, PMI readings are a major indicator of economic health, and these positive UK results help support the notion that the consequences of June’s Brexit vote could have a much smaller adverse impact on the UK economy than previously anticipated.

At the same time that this positive news has emerged from the UK, the US has had a relatively rough few days in terms of economic data. Friday’s US non-farm payrolls (NFP) release showed that a relatively disappointing 151,000 jobs were added in August against previous consensus expectations of around 180,000. Additionally, wage gains and the unemployment rate for the US were also not as encouraging as expected. To make matters even worse – and more pessimistic for the prospects of a near-term Fed rate hike – the US ISM Non-Manufacturing PMI data for August was released on Tuesday, showing a significantly slower than expected 51.4 expansion against expectations of 55.4. This represents the lowest level in more than six years, and follows closely after last week’s surprisingly disappointing Manufacturing PMI data, which showed an unexpected contraction.

Together, the NFP and PMI releases have made it increasingly unlikely that the US Federal Reserve will raise interest rates in its next policy meeting two weeks from now. Indeed, the implied probability of such a rate hike as seen by the Fed Fund futures market has continued to drop as of Tuesday down to the 15-18% range.

This combination of data has weighed heavily on the US dollar, at the same time that the UK PMI data has sharply boosted the British pound. As a result, GBP/USD has extended its relief rebound and recovery of the past three weeks from near its long-term lows. From a technical perspective, the currency pair has risen sharply off mid-August’s post-Brexit lows in the 1.2800’s. Currently, GBP/USD has begun to approach major resistance around the key 1.3500 level, and its 50-day moving average has begun to turn positive once again. With any further optimistic economic news from the UK, along with continued data-driven delays in Fed action, GBP/USD could rise to break out above the 1.3500 resistance level. With any such breakout, the next major upside target is around the key 1.3800 level. 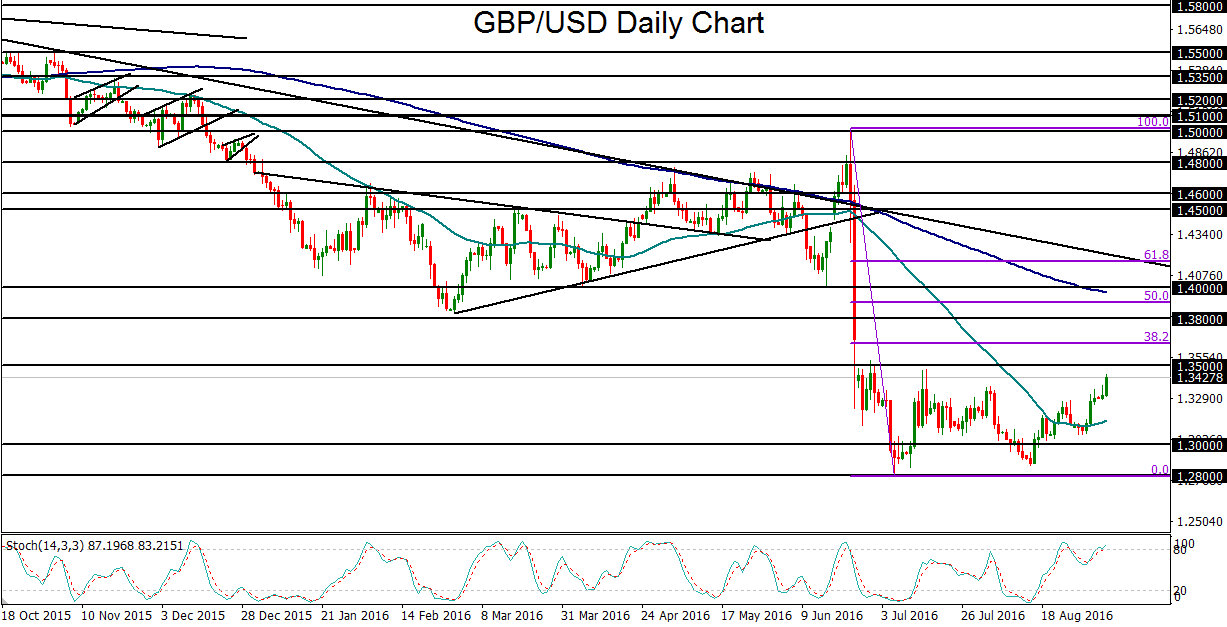