Copper And Platinum Recovery on the Prospect of Economic Reopening

Both copper and platinum have industrial usage. Copper is the most popular metal for industrial usage, such as wire, motor, construction material and so on. Besides, copper is also named as an economic indicator as it is widely used in different areas. Platinum is used in the chemical industry as a catalyst and electronic industry for computer hard disks and thermocouples.

After that copper and platinum prices rebounded 15% and 40% respectively on the prospect of economic reopening. Recently, the Japanese government was set to end its nationwide state of emergency. Meanwhile, Australian government allowed kids to go back to the classroom. Countries gradually eased the lockdown, while investors would expect the recovery of economic activities.

Commodity Futures Trading Commission reported that the net long position of platinum increased by 5,161 contracts to 11,797 contracts , reaching 10-week high, for the week ended. On the other hand, the net short position of copper decreased by 3,450 contracts to 9,702 contracts, reaching a 4-month low. In above data, we could see that the investors are still adding the bullish bet on platinum and cutting the bearish bet on copper. This indicates the positive signal for both metals, as the risk appetite of investors is increasing.

In addition, China's copper concentrate import increased 22.9% on month to 2.03M tons in April. China is the largest copper consumption country in the world, the increase of copper import could mean the recovery of the Chinese industrial activities..

Let's take a look at the copper's daily chart.

The technical outlook of the copper is positive as the prices are supported by a rising trend line drawn from March low. Besides, the prices have recorded a series of higher tops and higher bottoms. The golden cross between 20-day and 50-day moving averages has been identified. It helps to enhance the positive signal as well.

After that, it is time to take a look at the platinum chart. 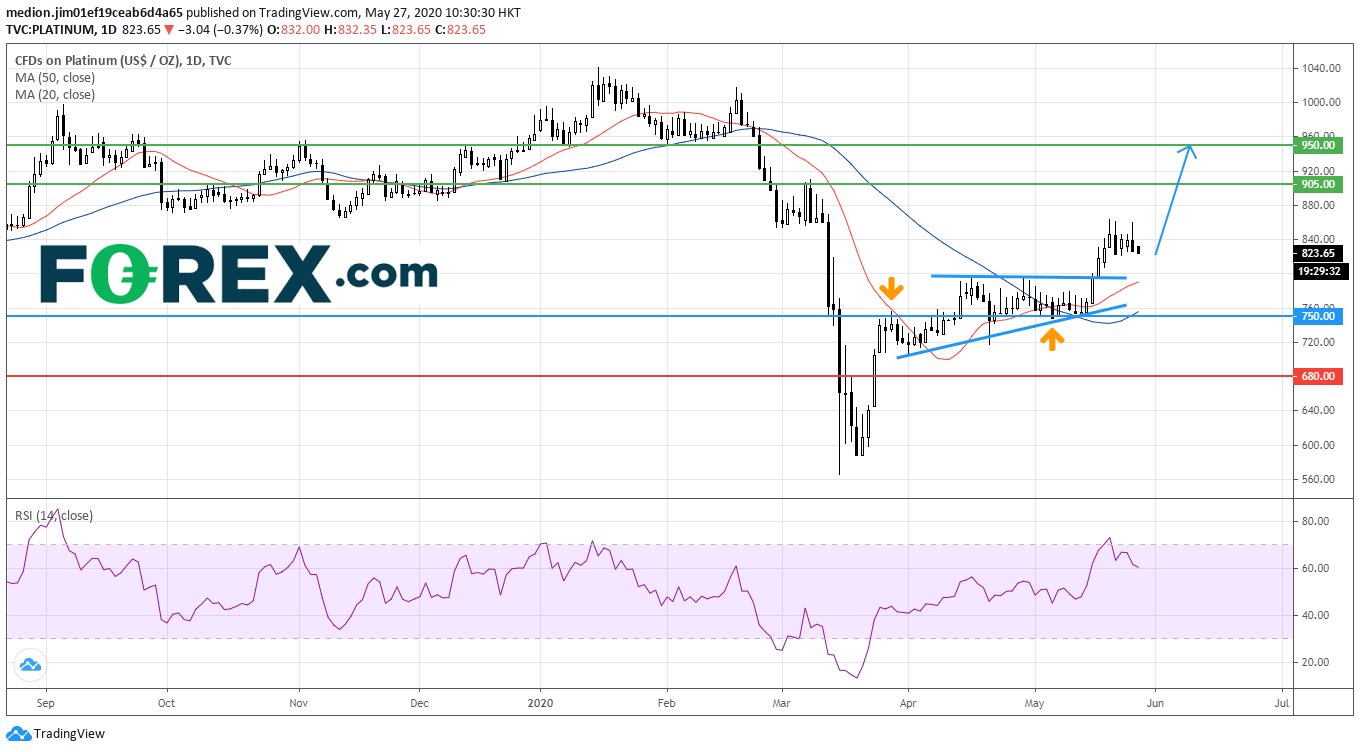 On a daily chart, platinum validated a bullish breakout of the ascending triangle, suggesting the resumption of the recent uptrend. Recently, the 50-day moving average is also turning upward. As prices stand above both rising 20-day and 50-day moving average, the short term outlook would be positive.