Could BoE-hit GBP/USD bounce back after US NFP?

Sterling found mild support on the back of the latest PMI data from the dominant UK services sector, which suggested business activity grew at its strongest pace in six months in October. But the GBP/USD’s gains were capped as traders sat on their hand ahead of the key jobs report from the US.

The pound has managed to bounce back a little this Friday morning after taking a plunge on Thursday when the Bank of England delivered a so-called dovish rate rise. Sterling found mild support on the back of the latest PMI data from the dominant UK services sector, which suggested business activity grew at its strongest pace in six months in October. But the GBP/USD’s gains were capped as traders sat on their hand ahead of the key jobs report from the US.

The services sector’s solid showing means the UK economy scored a hat-trick of better than expected PMIs last month. On the surface, the PMI figures contradict economists’ worries that the Brexit uncertainty is undermining business confidence, and raises question marks over the BoE’s judgement on the economic outlook. After all, the headline print of 55.6 was a solid two points above the previous month’s reading, and also well above 53.3 expected.

Why then did the pound not react more significantly, one has to wonder? Well, one reason could be that speculators are largely sitting on their hand ahead of the key jobs report from the US at 12:30 GMT and after Thursday’s BoE-linked drop not many speculators are in the mood to pick the dips in the pound. But this does not explain why the pound crosses were equally muted as the cable itself. The devil is in the detail and a closer look at the UK PMI report reveals two key points: 1) the rate of input cost inflation in the services sector had eased to its lowest since September 2016 and 2) the rate of job creation slipped to a seven-month low in the sector. These are the exact sort of things that the BoE is so worried about, underscoring their view that future interest rate rises should take place only “at a gradual pace and to a limited extent”. Still, the PMI report did reveal a few positive surprises, as the sector activity was boosted by improved order books and resilient client demand.

Overall, I do think that the market may be under-pricing the risks that the UK inflation will remain high longer than anticipated. The economy is continuing to weather the uncertainty over Brexit surprisingly well and there is a danger that oil prices will rise further in the coming months on Russia and OPEC’s joint efforts to reduce global crude stockpiles, which in turn may help increase input costs for manufacturers and push prices up for consumers.

On the other side of the GBP/USD’s equation is the US dollar. A rate rise in December is largely priced in and with the new Federal Reserve President, Jerome Powell, being a dove, one has to wonder how fast interest rates will rise in the US next year. So, don’t be surprised if the cable were to rise back towards 1.35s over the medium term outlook.

In the very short-term outlook, today’s jobs report from the US at 12:30 GMT may cause further falls for the GBP/USD in the event we see a stronger than expected print. Many economists expect jobs growth to rebound strongly following last month’s weather-related drop. A headline figure of 312,000 is expected and regardless of what the actual figure may be, it is likely that last month’s 33,000 drop will be revised positively. So, one should look at the net figure over the past two months when judging the recent strength of the US labour market. Meanwhile the focus will also be on the average hourly earnings index (+0.2% m/m expected) which will be released alongside the jobs number, and later, at 14:00 BST, on the ISM services PMI (58.5 expected) and factory orders (1.3% expected).

Ahead of the publication of US macro data, the cable has bounce off its lows, finding support from a rising trend line around the 1.3050 level. From a purely technical point of view, a break back above the prior support in the 1.3070/90 area could be the trigger what many short-term-focused bullish speculators are probably waiting to see, as this would confirm that yesterday’s breakdown was merely a false move to shake out the weaker bulls. Even so, we will be caution on the cable until price makes a new high above the recent resistance in the 1.3300-3350 range. In the event price continues to head lower, the next level of potential support to watch is around the psychologically-important 1.30 handle where we also have the 38.2% Fibonacci level converging. If this level also breaks in the coming days then the cable may go on to test its 200-day average at 1.2850ish next. 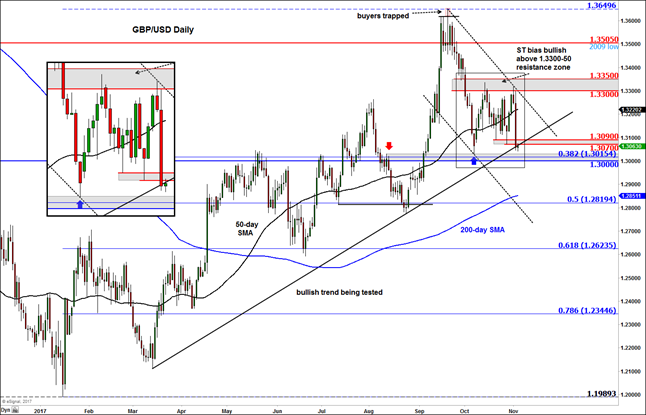