The GBP/USD broke down earlier on the back of a slightly disappointing UK wages data and after reports emerged that Prime Minister Theresa May could lose an important parliamentary vote on Brexit.

The GBP/USD broke down earlier on the back of a slightly disappointing UK wages data and after reports emerged that Prime Minister Theresa May could lose an important parliamentary vote on Brexit. Apparently, Labour will support a move from pro-European Tory MPs to keep the UK in a customs union with the EU if no trade deal is reached by January. This could further complicate the already-dire situation. Along with the GBP/USD, other pound crosses also dropped, including the GBP/JPY and GBP/EUR and even the GBP/CAD – the latter falling despite the oil slump also weighing heavily on the Canadian dollar.

UK CPI inflation expected to have accelerated in June

However, the selling looks a little overdone in the short-term outlook and so we won’t be surprised if sterling was to rebound here. After all, we have a very important piece of news coming up from the UK tomorrow, namely CPI. While a disappointing reading could further weigh on the pound, it is worth pointing out that even the most bearish of speculators out there may consider limiting their exposures ahead of such important data. Short-covering could therefore help to provide some support for the pound. In fact, analysts think that the UK CPI may have actually accelerated to 2.6% in June after easing somewhat in recent months to 2.4% from the 3.0% recorded back in January. If this turns out to be the case, or if inflation turns out to be even hotter, then the pound could rebound sharply.

If the pound has any chance of a comeback and given the ongoing Brexit uncertainty, it may be a better idea to play its potential strength against her weaker rivals in order to maximise the potential returns. One such currency is the Swiss franc, which remains under pressure owing to a dovish central bank. The Swiss National Bank has more or less pegged its policy to that of the European Central Bank. With the ECB recently indicating that its first rate increase will probably come in Q3 of 2019, rather than in Q2, expectations over a corresponding rate hike from the SNB has been pushed further out and now the market anticipates this to be in Q4 of 2019. The SNB was previously expected to hike interest rates in Q3 of 2019. In any case, the BoE is currently more hawkish than the SNB and this makes us fundamentally bullish on the GBP/CHF in the long term outlook.

From a technical point of view, the GBP/CHF had been showing some bullish price behaviour of late and was on the verge of a breakout above a key resistance area around 1.3250/70. However, over the past day and a half rates have drifted lower as the safe haven franc got a boost from the slight risk-off tone in the equity markets while the pound fell further on Brexit uncertainty and today’s weaker than expected wages data. Consequently, the cross has remained below the 50- and 200-day moving averages and a downwardly-sloping trend line, which is technically bearish. However, given our fundamental views (bullish) on this pair, we would favour looking for bullish setups than bearish. Thus, we are on the lookout for that breakout above 1.3250/70 to potentially occur at some point later in the week, or for price to form other bullish patterns at lower levels first. 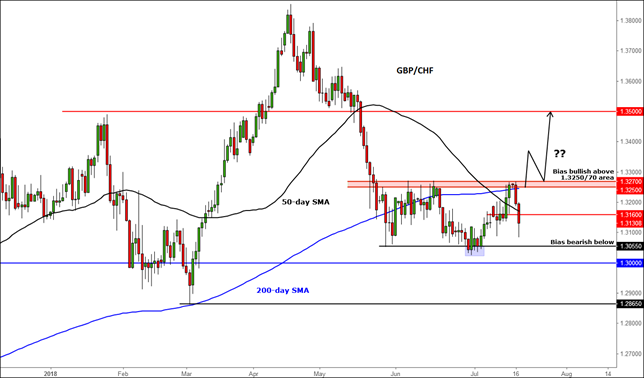