The second quarter earnings season has started brightly with the likes of Alcoa, JP Morgan and Citigroup all reporting numbers that were better than expected last week. The good run of form has continued at the start of the week as the Bank of America became the latest Wall Street giant to report forecast-beating numbers this morning, which caused its shares to climb some 4 per cent higher. This helped to keep the S&P 500 hover near its record high levels hit last week, though the markets have struggled to push further higher. It is a quiet day in the markets and ahead of the key earnings releases, not many people are willing to build aggressive positions and some are taking profit given the sharp rally over the past several days. The bears are largely on the side-lines, for now, as their recent efforts to push the indices lower continually failed.

To dissuade bullish speculators from taking profit on their positions in a meaningful way, we do need more earnings to come out ahead of expectations in the coming days and weeks. After all, a pause or a short-term pullback one would argue looks almost inevitable after such a strong up move. But with the S&P 500 breaking out of its 2-year consolidation last week, it could take a long time before we see a correction of some sort. Indeed, on the contrary investors clearly expect to see further gains for US stocks: according to data from EPFR and Bank of America Merrill Lynch, inflows into the US equity markets rose by the biggest amount since September 2015 last week. Evidently, investors are reallocating their funds into the US from European markets, where equity funds suffered their largest outflows on record last week with $5.8 billion being withdrawn as the run of outflows stretched to 23 weeks. Concerns about the impact of Brexit on the EU and the lack of any real economic growth there are among the reasons holding European investors back.

Some of the key earnings to watch this week include:

With quite a few technology companies set to report their results this week, the Nasdaq 100 is an alternative to or a better index to watch/trade than the S&P 500.  At 4620, the tech-heavy index is now not too far off its March 2000 record high of around 4816. The index is heading in the right direction after recently breaking above its bearish trend line and prior resistance in the 4536-73 region, an area which could turn into support upon re-test. The next key potential resistance levels to watch are around 4735/40, the high from last year, followed by the all-time high and the top of the bullish channel at around 4815/16. As things stand, the path of least resistance is clearly to the upside for the Nasdaq 100 (and S&P 500, Dow Jones et. al). But if this week’s earnings results or otherwise cause the Nasdaq 100 to turn lower then it would still take a breakdown below a key support level, such as 4535/6, to invalidated the short-term bullish trend. Even so, the long-term trend would remain bullish for as long as the index resides inside its rising channel. What’s more, the crossing of the 50-day moving average above the 200 is a further long-term bullish development. This development should catch the eyes of more bullish trend followers now. 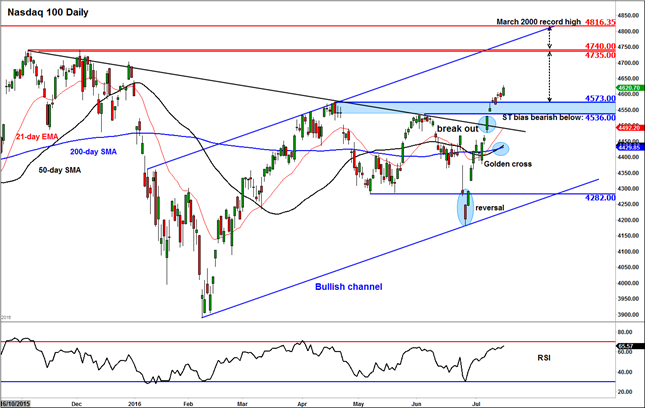