Could GBP/USD turn lower from these key Brexit resistance levels?

The pound made headlines yesterday as it rallied sharply to a new post-Brexit high of about 1.3940 against the dollar. But it wasn’t able to hold onto its gains as the dollar made a comeback across the board.

The pound made headlines yesterday as it rallied sharply to a new post-Brexit high of about 1.3940 against the dollar. But it wasn’t able to hold onto its gains as the dollar made a comeback across the board. The greenback bounced perhaps because of the fact that the implied probability of the Federal Reserve hiking interest rates three times this year rose to 55% from about 48% on Tuesday. This brought the market’s view in line with the Fed’s own projections. Though we had a stronger-than-expected industrial production figure out of the US, there was no obvious trigger for the increase in rate hike expectations. Further strengthening of US data should help to encourage the Fed from tightening its belt. Meanwhile the FOMC knows very well that there are increased risks that the dollar will likely appreciate in value over time as the Fed further tightens its belt. But the dollar’s weakness throughout 2017 and at the start of this year means, unlike for the ECB, that the exchange rate isn’t a big issue for the Fed when it comes to making a rate hike decision – at least for now anyway. So, it could be that the soft dollar has actually helped to raise market’s expectations about US rate hikes.

If the dollar were to make a more meaningful comeback then out of the major currencies, those where the central bank is still dovish should lose out against the greenback. But even the rallying pound could come under some short term pressure, not least because of technical reasons. Yesterday saw the GBP/USD rally sharply into a key resistance area which we had previously identified HERE. As can be seen on the chart, the cable probed liquidity that was resting between 1.3835 and 1.4015, the pre-Brexit low. Once support, this area was always going to provide some resistance and so it proved yesterday as price gave back a big chunk of its advance here. Whether or not resistance will hold here for too long remains to be seen, however. Indeed, the GBP/USD was trading higher again at the time of this writing. But there’s still the potential we could see at least a short term top in this region given the technical and psychological significance of these levels. The sellers will need to chop some wood, though, as the trend is clearly bullish for now. There are lots of support levels that need to be taken out in order for the bulls to lose control in a meaningful way. Among other levels, 1.3500/5 is important to watch as this was the base of the latest breakout. If this level fails to hold as support then we may see a sharp pullback towards the next support at 1.3655, 1.3610 or possibly 1.3555 next. 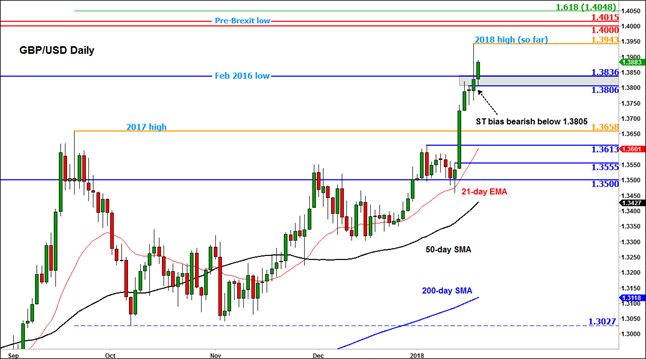