Could NFP support a dollar recovery?

Today, the US nonfarm payrolls report has the potential to reverse the dollar’s downward trend – at least in the short-term – should we get a positive surprise, and a big one at that.

The main theme so far in the week has been rising government bond yields in the US and especially Europe amid expectations that global economic growth and therefore inflation will pick up further in the coming months. This has in turn helped to support the idea that the ECB will have no choice but to end its extraordinary loose monetary policy in the not-too-distant future before potentially embarking on a rate-hiking cycle. The Fed’s expected future rate hikes have been well documented and mostly priced in. This is why the yields spread between US and Eurozone government debt has narrowed and why the EUR/USD has risen. The rising euro and yields have been a toxic mixture for European equities this week, although shares on Wall Street have also come under pressure, for a change.

Today, the US nonfarm payrolls report has the potential to reverse the dollar’s downward trend – at least in the short-term – should we get a positive surprise, and a big one at that. This will be the first jobs data for the year and expectations are pointing to an improvement over December’s disappointing outcome. Around 180,000 non-farm jobs are expected to have been added to the US economy in January following a worse-than-expected showing of 148,000 jobs added in December. The unemployment rate is expected to have remained at 4.1%, while average hourly earnings are expected to have increased by 0.2% after December’s 0.3% rise. It terms of leading indicators, the ADP private sector payrolls report came out ahead of expectations, while the ISM manufacturing PMI employment component grew at a slower pace compared to December. Meanwhile the employment component of the dominant services sector will be released on Monday which will therefore make it even more difficult predict the outcome of today’s jobs report.

Ahead of the NFP release, the dollar has managed to bounce back a little against some currencies but nothing meaningful. In January, the dollar posted its worst monthly performance since March 2016. With the dollar failing to respond positively to a hawkish Fed, it remains to be seen how much of an impact the jobs report will provide. So the bigger risk is that the dollar’s selling could accelerate today in the event of a worse-than-expected jobs report. This would only serve to boost the ongoing bearish sentiment that continues to exist towards the dollar.

USD/JPY for the bulls, should NFP beat

In the event the data beats expectations then it makes sense to look for signs of dollar strength against currencies which have underperformed, such as the yen. While the likes of the EUR/USD, CHF/USD and GBP/USD have rallied above their highs last year, the JPY/USD has yet to do the same. With both GBP/JPY and EUR/JPY surging higher, the yen is clearly the weakest currency after the dollar. Indeed, the USD/JPY is actually up for the third day ahead of the jobs report after it defended key support at 108.30-45 area last week. With prices breaking above the 109.70 short-term resistance level, this is now going to be the first line of defence for the bulls. If we get a closing break back below this level today then all bets are off for the bulls. However if the dollar holds its own then we could make a case for a possible rally in the USD/JPY in the coming days. There are a few short-term levels worth keeping an eye on now, starting at 110.20, formerly resistance, followed by 110.85. 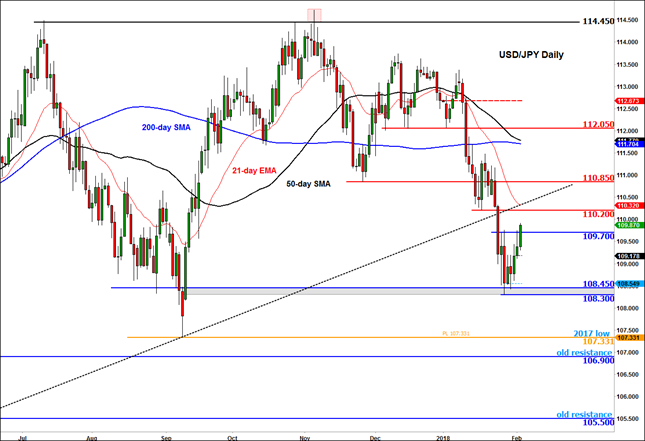