Could the dollar make a surprise comeback?

The dollar could fall further ahead of the US CPI and retail sales tomorrow given the lack of any fundamental drivers in the interim. Obviously a strong set of numbers tomorrow could boost the dollar. But could it make a (surprising) comeback regardless of the data anyway?

At her testimony yesterday, Janet Yellen came across as more dovish than expected. The dollar fell sharply as investors were reminded that future rate rises will be rather gradual. Stock markets love low interest rate levels and for that reason they were able to rise sharply which lifted the Dow to a new all-time high. Investors also liked the look of the latest Chinese trade figures that were released overnight. They revealed both imports and exports rose more than expected, further easing concerns about a slowdown at the world's second largest economy. With China being Australia's largest trading partner, the AUD/USD (which was already up due to weakness in US dollar) found additional support overnight and was trading near that key 0.7750 hurdle again at the time of this writing. However, around lunchtime, European stock markets started to ease off from their best levels as government bond yields rose. This may have been due to a report that suggested the ECB could signal at its September 7 meeting that QE will be gradually wound down next year.

As far as the dollar is concerned, well it could fall further ahead of the US CPI and retail sales tomorrow given the lack of any fundamental drivers in the interim. Obviously a strong set of numbers tomorrow could boost the dollar. But could it make a (surprising) comeback regardless of the data anyway? The greenback has been weakening throughout the year as the markets didn't trust the Fed's optimistic growth forecasts and thus their slightly hawkish interest rate projections. So, now the markets may be thinking something in the lines of: “well, we told you so Yellen, but now that you are acknowledging the weakness in economic conditions we are patting ourselves on the back and buying the dollar at these lower levels, at a time when sentiment is decidedly bearish.” So despite the Fed apparently turning slightly less hawkish, this is something the markets had expected for a long time anyway. Why then continue selling the oversold dollar, when other major central banks are still mostly dovish? If the US dollar is going to make a comeback then its best bet may well be against the yen and Swiss franc, and possibly the Canadian dollar now that the BoC has raised rates as expected.

So far however only the USD/JPY has shown any signs of life in terms of dollar strength. But could the Swissy make a comeback now? The USD/CHF has bounced off its November 2016 support level at 0.9555, while the Dollar Index (DXY) has broken below its correspondingly level at 95.88. Thus the USD/CHF has outperformed the DXY. It is worth pointing out that the DXY hasn’t suffered a significant follow through in the selling pressure beyond the 95.88 level, which may suggest that the dollar selling may be overdone, at least in the short-term anyway. Given the Swissy’s relatively better performance, a dollar come back could boost this pair more than, say, the USD/EUR (i.e. EUR/USD inverted).

Technically, the USD/CHF has also formed a small positive divergence on its RSI (making a higher low when price made its recent lower low). The RSI divergence suggests that the selling momentum may be waning. Indeed, the Swissy’s ability to reclaim the broken old support at 0.9620 is worth noting. All the bulls need now is a break in market structure. So, a move above the most recent high at 0.9770. It will likely achieve this objective if it manages to break through 0.9685-0.9730 resistance zone first. All that being said, a decisive break below 0.9555 would invalidate this potentially bullish outlook. At this stage this is just a potential bullish scenario for the Swissy; we haven’t had any confirmations yet. 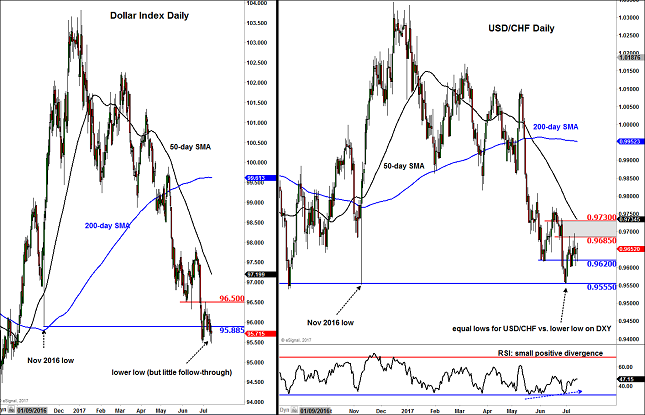