NZD/USD: Could the kiwi make a comeback?

The NZD/USD has been falling steadily ever since the RBNZ delivered its last policy statement at the start of this month. The New Zealand central bank said it will remain on hold until after the new government is formed in September, but that the next rate change will be an increase...

The NZD/USD has been falling steadily ever since the RBNZ delivered its last policy statement at the start of this month. The New Zealand central bank said it will remain on hold until after the new government is formed in September, but that the next rate change will be an increase. The market interpreted this as a dovish move and consequently the NZD dropped. But at a record low 1.75%, interest rates in New Zealand are one of the highest among the developed economies. With equity markets surging to new unchartered territories in the US and multi-year highs in Europe, sentiment appears to be pretty much bullish. The positivity stemming from the stock markets could weigh on the perceived safe-haven US dollar and underpin risk-sensitive currencies such as the Australian and New Zealand dollars. Trouble is, the US dollar has acted anything but a safe-haven asset: it has rallied alongside the equity markets, mainly due to the fact that central banks outside of the US have remained dovish. But the intermarket relationships can and will break and I wouldn’t be surprised if the twain went their separate ways.

As for the NZD/USD, this currency pair could make a dramatic comeback if a key support level at 0.7130/5 holds firm. Otherwise it may drop towards 0.70 again before deciding on is next move. The 0.7130/5 level marks the convergence of the low from last week and the rising 200-day moving average. Given the importance of these technical indicators, a bounce of some sort appears likely. But there is a potential that the kiwi could find significant support here, before surging higher. Anything is possible. However for the buyers to come back in force, they will need a couple of things to go in their way. First, the abovementioned 0.7130/5 level needs to hold as support on a daily closing basis. Second, resistance at 0.7240 then needs to break. If these conditions are met, we could see a nasty short-squeeze rally. 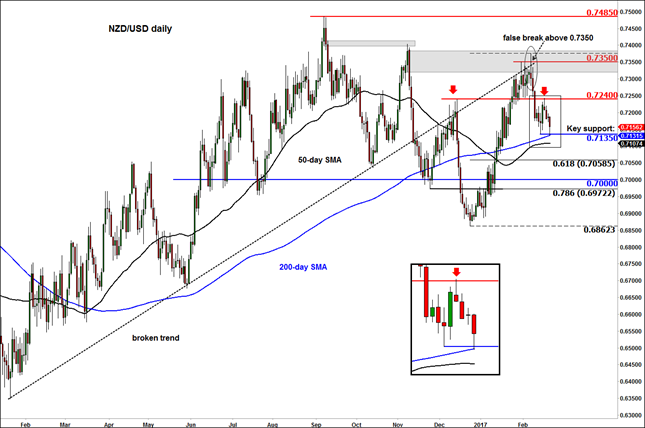