<p>Both oil contracts dipped into the $30-a-barrel territory this morning before bouncing back sharply, driving stocks higher with them. The rebound looks to be driven first and foremost by technical factors, as described below. The short-covering bounce may have also been triggered by speculation over an extraordinary meeting of the OPEC in "early March" to address the slumping crude prices. The oil cartel’s President, Emmanuel Ibe Kachikwu, said that the cartel had agreed at their previous meeting to meet again if the price of oil hits $35 a barrel. Now that it has fallen below this handle, an extra-ordinary meeting of the OPEC may well be on the cards. Even so, the cartel is unlikely to make any changes.</p>

Both oil contracts dipped into the $30-a-barrel territory this morning before bouncing back sharply, driving stocks higher with them. The rebound looks to be driven first and foremost by technical factors, as described below. The short-covering bounce may have also been triggered by speculation over an extraordinary meeting of the OPEC in "early March" to address the slumping crude prices. The oil cartel’s President, Emmanuel Ibe Kachikwu, said that the cartel had agreed at their previous meeting to meet again if the price of oil hits $35 a barrel. Now that it has fallen below this handle, an extra-ordinary meeting of the OPEC may well be on the cards. Even so, the cartel is unlikely to make any changes.

The OPEC has taken a big gamble that hasn’t really worked so far, but the damage is already done and it doesn’t make sense for the oil cartel to curb production now. Essentially, the smaller OPEC members, who are struggling really badly, are unlikely to be able to persuade the Saudis to make a U-turn on their policy of maintaining market share. That’s especially the case given the recent deterioration of diplomatic ties between Saudi Arabia and Iran, with the latter being on the verge of seeing its oil sanctions lifted after the EU’s foreign policy chief said they could end "soon."

But the markets can be efficient at pricing in future changes to supply and demand forces, and I wonder how much of all this oversupply story is now priced in. At $30 a barrel, crude prices may be very close to a bottom anyway. It is becoming very expensive and for some probably unprofitable to produce oil at these price levels. Non-OPEC production is thus likely to fall noticeably sharply now, leading to a significant percentage price recovery, probably around mid-2016.  In the US, crude supply may respond very soon too to these extremely low prices given for example that the rig counts fell once again by another 20 rigs last week to their lowest level since April 2010. It could also be that the price of oil has fallen below its fundamental value because of panic selling, and a reversion to the equilibrium price – whatever that might be – could take place soon.

So, who knows, we could be very close to a bottom for oil. And more so because of the extremely negative sentiment at the moment, with some forecasting oil prices to drop to as low as $10 a barrel! But exactly when and at what price level the bottom will be made is anyone’s guess at this stage. The good news is that we will find out soon. In the very short-term though, not many people are expecting to see a significant rebound in oil, so prices are continuing to gush lower to multi-year lows as sentiment goes from bad to worse, as clearly reflected in positioning data. According to the CFTC, for example, there was an 11 per cent rise in short bets in the week to 5 January while net long positions were reduced to their lowest level since July 2009. In contracts, Brent saw a rise in net long positions in the same week, according to the ICE. The renewed selling pressure since however means that most of those positions are likely to have been covered by now.

Given the sharp 6.5-day sell-off, bearish oil traders probably thought this morning that it was the right time to book some profit especially since the $30 handle for Brent had been a line in the sand for some market participants. Although Brent never reached $30, at $30.40 it got close enough. There are also a couple of Fibonacci extension levels converging around the psychological level, while the momentum indicator RSI is at an extremely oversold level and in a state of a bullish divergence with price (i.e. it is making higher lows). So, $30 marks an exhaustion point and is thus a very important technical level, around which it is possible for Brent to form a base. But this (or indeed any other near-future bounces from a key level such as $30) could be a mere oversold rally in a downward-trending market. It will be interesting to see how oil will react around old supports such as $32.15 or $36.20, should we get there. So even if a bottom has already been formed or is about to be reached, it will be difficult to confirm it until price takes out some important resistance levels, moving averages of trends lines – such as those on the chart, below. But if Brent goes on to break  decisively  below $30 in one of these days, then the next stop may well be at the psychological handle of $25, followed by the next Fibonacci extensions around $23, $21 and then the next round handle at $20. 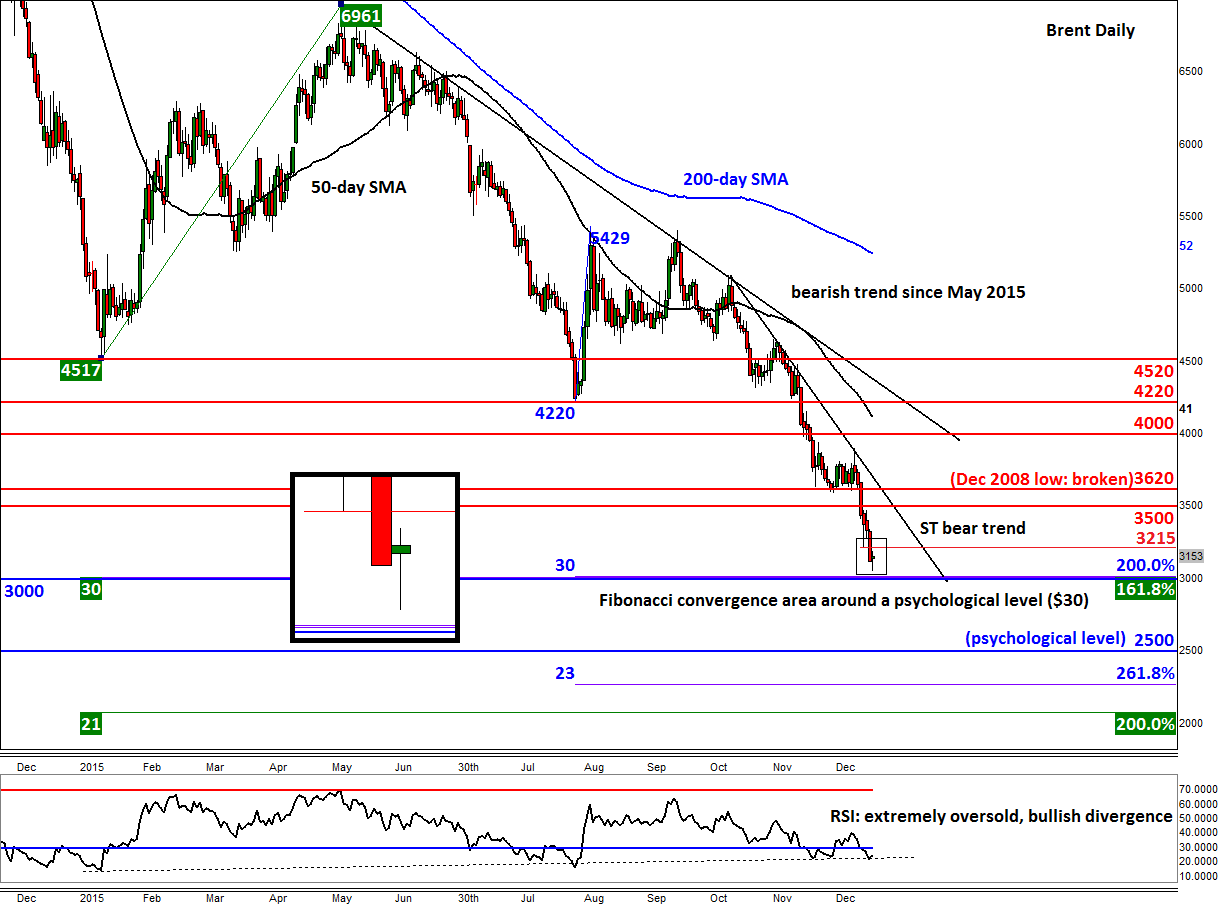