As we head towards the weekend, oil prices have turned sharply negative after starting the week on the front foot. Barring an unexpected rally later on today, oil prices are set to end a six-week winning streak.

As we head towards the weekend, oil prices have turned sharply negative after starting the week on the front foot. Barring an unexpected rally later on today, oil prices are set to end a six-week winning streak. This would halt a rally that began a few months ago when oil prices found support after signs emerged that the US would reinstate economic sanctions on Iran and as crude output from some OPEC members fell, most notably Venezuela. Meanwhile destocking of crude inventories in the US saw oil stockpiles there drop to the lower half of the average range for this time of year, according to the US Department of Energy. But with the US oil production continuing to rise, it was always a matter of time before the OPEC responded. Lo and behold, Saudi Arabia’s energy minister Khalid Al-Falih today said that consumers should be concerned about potential oil shortages and so the OPEC needs to make sure oil supply is adequate. He more or less confirmed that there will be some adjustments to the current OPEC+ agreement after the 22 June meeting in Vienna, but insisted that the release of supply will be a gradual process.

This was music to ears of oil market bears. Both oil contracts, which were already under some pressure, dropped sharply with Brent briefly falling below $77 handle and WTI almost reaching $69 before bouncing back a little at the time of this writing. The signs of a correction of some sort were already there, but with the OPEC’s de facto leader insisting supply will adjust, this is the trigger that speculators needed. Obviously this does not necessarily suggest prices will continue heading lower, for there’s always the possibility of supply shocks for example from the Middle East and North Africa regions, not to mention Iran and Venezuela. But for now at least, the trend has turned bearish and the losses could extend next week.

We had already highlighted the possibility of a correction in oil on Wednesday in THIS report. On this occasion we correctly thought Brent oil’s unsuccessful attempts to hold above the $80 handle was technically bearish as it showed fading bullish momentum. That failure left behind a double top reversal pattern around the $80 mark, which was confirmed today as prices broke the pattern’s neckline around $78. This level is now going to be the key resistance for Brent oil going forward. Meanwhile this week’s sell-off also means resistance at the top of the long-term bullish channel has held. Consequently, we could see prices drift back down towards the middle or lower end of the channel over the coming weeks. But if Brent reclaims the $78 handle and hold there then we could see another run towards $80 again. 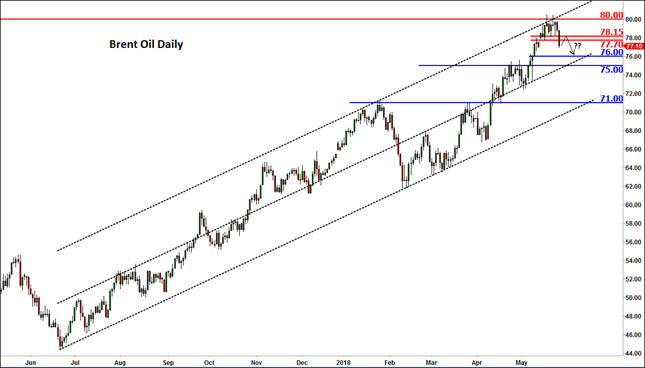