Crude hits new 2017 low… but are investors too pessimistic?

The price of crude oil has hit its lowest level this year. Brent fell below $46 and WTI took out $44 a barrel this morning. Crude prices thus breached the lows that had been established prior to the last OPEC meeting, in which the not-so-effective oil cartel agreed with Russia to extend the deal to limit crude production into the first quarter of 2018.

The price of crude oil has hit its lowest level this year. Brent fell below $46 and WTI took out $44 a barrel this morning. Crude prices thus breached the lows that had been established prior to the last OPEC meeting, in which the not-so-effective oil cartel agreed with Russia to extend the deal to limit crude production into the first quarter of 2018.

The lack of a positive response in oil prices clearly suggest market participants are not convinced that the OPEC’s efforts will help shore up prices in a meaningful way in the short-term as shale supply continues to rise in the US. Last week’s news of a rise in US crude production and an unexpected build in gasoline stocks only helped to exacerbate those fears. We will have to see how the supply situation has changed in the latest week and how it evolves over time. Supply data for the week ending June 16 from the American Petroleum Institute (API) will be released tonight ahead of the official figures from Energy Information Administration (EIA) tomorrow. Unless we see a marked reduction in crude stockpiles, the possibility of further short term falls in the price of oil cannot be ruled out. In the slightly longer-term outlook however, I expect the price of oil to regain its poise again. Although not very effective yet, the impact of the OPEC’s deal with Russia will take time to filter through. As the global disparity between demand for and supply of oil reduces in the coming months, prices should begin to recover.

The other trouble with oil is that at the moment sentiment is still quite bearish and traders seem happy to keep selling into every rally. The key questions therefore are: when will this trend end, and how low oil prices could go before it rebounds? The answer to both is simple: no one knows. But with most of the negativity in the price by now, I would say “soon” and “not very much.” As such, I am half expecting this latest breakdown of a prior support, in the case Brent at $46.75, to be a false move. If this turns out to be the case, then we could see a sharp short-squeeze rally to ensue once the broken level ($46.75) is reclaimed and price makes a short-term higher high (in this case above $47.70). However, for now, that is just a potential scenario. We may very easily see further declines before oil prices stabilise. 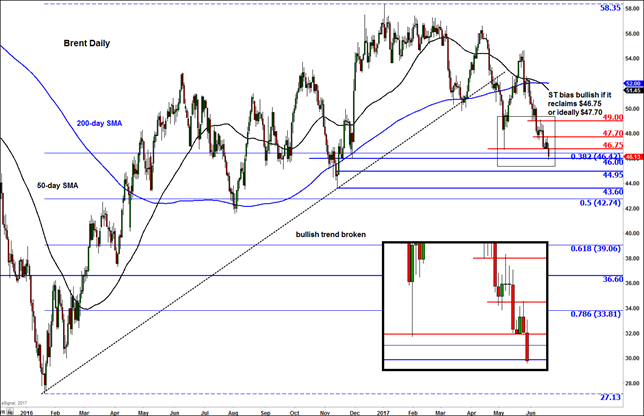