Although slightly weaker today, oil prices have been drifting higher over the past two and a half weeks. Speculation has been rife that the OPEC and some non-OPEC countries will agree to a nine-month extension of the oil production cuts agreed six months ago.

Although slightly weaker today, oil prices have been drifting higher over the past two and a half weeks as we had predicted in our previous report HERE. Speculation has been rife that the OPEC and some non-OPEC countries will agree to a nine-month extension of the oil production cuts agreed six months ago. Given the backing of Russia a few weeks ago and the corresponding rises in oil prices since, most market participants will be thinking that an agreement is almost a foregone conclusion. But this expected outcome of the OPEC meeting may still cause oil prices to rise a little bit further. However, speculators who are already positioned long in crude oil may then use that as an opportunity to bank profit. This may result in oil prices actually falling, possibly as early as by the end of Thursday’s session. But if there are any surprise announcements then the reaction of oil prices may well be very different.

In any case, an agreement to extend production cuts by nine months should help to reduce global oil stocks. Thus, any short-term weakness in oil prices – say, as a result of profit-taking – may very well be short-lived.

That being said, we are not expecting the moon either. It has become quite clear that Saudi Arabia’s ability to control prices has weakened considerably and as such the OPEC as an organisation has turned into more of a price taker than a cartel. Hence, Saudi needed in November the help of non-OPEC oil producer Russia in order to get the other OPEC members to agree to an output cap. With the US continuing to win market share by producing more oil at lower price levels, the global supply excess will take a long time to eradicate.

Consequently, I can’t see oil prices going north of $65-$70 per barrel for the foreseeable future, even if I am still bullish in the short-term.

Thanks to speculation that the oil deal will be extended on Thursday, crude prices have rallied and consequently eroded many of the short-term bearish factors that previously applied. However, the slightly longer-term outlook remains unclear as prices continue to drift within their existing wide ranges, understandably so ahead of the OPEC meeting. Nevertheless, the path of least resistance appears to be to the upside for now.

Brent’s ability to reclaim the broken $49.90 support level two weeks ago was the first and key bullish trigger, which has since led to further technical follow-up buying. As a result, the London-based oil contract has risen above both its 50- and 200-day moving averages at $52.40 and $52.00 respectively, as well as prior resistance at $52.70. Thus, the old resistance area between $52.00 and $52.70 is the key support zone to watch heading into and in the immediate aftermath of the OPEC meeting. For as long as Brent remains above this area, the path of least resistance would remain to the upside. Meanwhile the key resistance area to watch is around $55.50 and $56.60 – this being the convergence of the bearish trend line with the prior swing high. If this area were to eventually break then there’s little further resistance until this year’s high at $58.35. Beyond this level, $61.50 would be the next bullish objective.

As far as WTI is concerned, the corresponding key support area is at $49.40-$49.60, where we have previous resistance level meeting the 50- and 200-day moving averages. The key resistance zone is a one-dollar range between $52.75 and $53.75, the lower end being the bearish trend line and the upper the previous swing high. A clean break outside of these support and resistance areas is what we would be waiting for. The upcoming OPEC meeting could very well be the trigger. 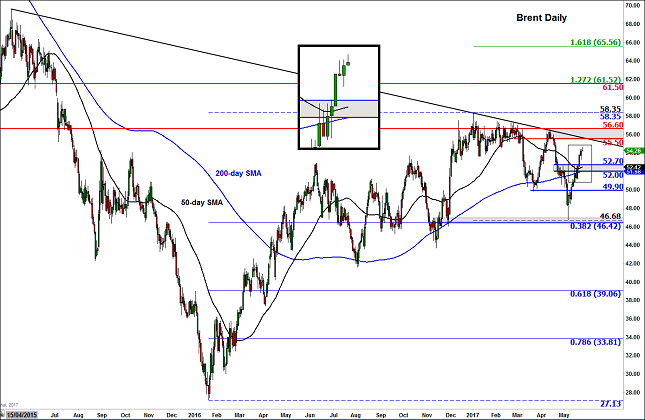 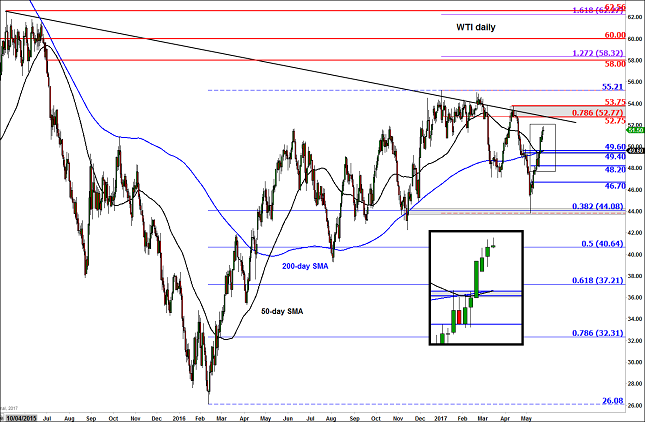