Crude oil drop could be temporary

After Friday’s unexpectedly sharp rally, a pullback of some sort was always likely, although the magnitude of the drop is somewhat surprising. But with oil prices now at or near key technical support levels we may see the buyers return again at some point this week and take control again.

Oil prices ended an otherwise dull week with a bang on Friday as both contracts surged sharply higher in a short period of time late in the day. There was no news released at the time, which means the upsurge was either a technical move or someone had knowledge of the US oil rig counts data which was published later on in the day, or more likely a combination of the two. Regardless of the reason, Friday’s oil spike ensured that Brent would close the week higher and WTI flat as both contracts recouped sharp losses. However there has been no follow-though in the buying momentum at the start of this week’s trading so far. Quite the opposite in fact as both contracts have fallen more than 2% each at the time of this writing on Monday afternoon. After Friday’s unexpectedly sharp rally, a pullback of some sort was always likely, although the magnitude of the drop is somewhat surprising. But with oil prices now at or near key technical support levels we may see the buyers return again at some point this week and take control again.

After all, data is turning slightly positive for oil again. Data from Baker Hughes, for example, revealed that oil rigs fell by 5 in the reporting week, which was the most since January. With rig counts falling again, the growth in US shale oil production may ease off again in the weeks to come. What’s more, US crude oil stocks have been falling consistently in recent weeks. If the downtrend in oil inventories is maintained then a bullish case can be made for oil, especially given the ongoing supply restrictions from the OPEC and Russia. The closure of Libya’s largest oil field due to a pipeline blockade may also lend prices some support in the short term.

Brent oil has now spent a vast amount of time trading either side of its technically-important 200-day moving average. It is a sign of a consolidating market. So far we haven’t seen any clear move away from the moving average to suggest that there is either strong buying or selling pressure coming in. One should be expecting this sort of static volatility until the trend becomes clearer. For day traders this is great but not so much for swing traders. The key short-term support for Brent is between $51.10 and $51.35 area, which is now in sight. Additional support comes in between $49.60 and $50.15. Only if Brent were to break below this region would the trend technical turn bearish. Meanwhile resistance is seen at $52.90, $53.70 and then at $54.65. These resistance levels need to clear if the bulls are going to take control. The weekly hammer candle suggests that the next move could be higher. 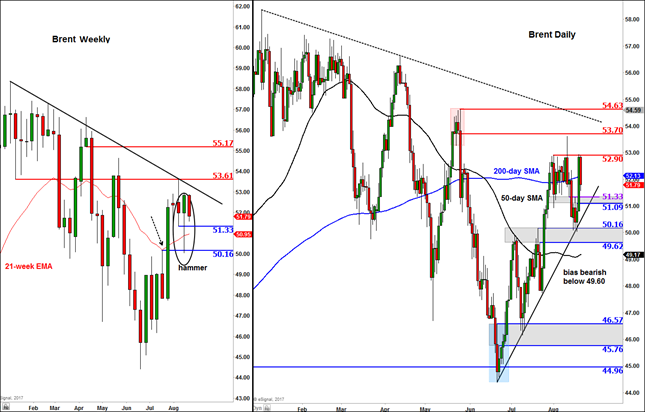