Ahead of the OPEC meeting, crude oil prices are easing off their best levels...

News that US oil inventories fell by a sharper-than-expected 3.4 million barrels last week initially caused WTI prices to turn positive earlier today. But once investors realised that the report also revealed that stocks of oil products rose sharply, they quickly abandoned those long positions and so prices fell back. Given that the focus of oil market participants is on the OPEC meeting tomorrow, not many speculators were willing to hold onto their positions for long anyway.

So, ahead of the OPEC meeting, crude oil prices are easing off their best levels. Some bullish market participants have undoubtedly been taking profit after the recent sharp gains ahead of such an important event. Still, barring an unexpected announcement from the oil cartel, Brent is on course to end higher for the fifth consecutive month while WTI is set to close positive for the third straight month, despite today’s weakness. The consolidation we are seeing currently is therefore a healthy one.

But could oil prices head lower in the coming days, in particular on Thursday? Most analyst expect the OPEC and Russia to merely extend the oil production agreement by another nine months to the end of 2018. This outcome may already be priced in as many oil ministers have been hinting at this for months. “Buy the rumour, sell the news” is a very typical reaction across the financial markets, so I wouldn’t be surprised if we see a similar move this time. But anything less than a nine-month extension would be a real surprise, which could lead to a sharp sell-off due to the high levels of expectations.

Assuming it will initially sell-off tomorrow on the expected announcement, crude prices may then recover once the dust settles. The path of least resistance has been to the upside for both oil contracts for much of the year and I don’t see why that should change if the major oil producers continue to collude on the production side. That being said, I don’t expect the moon either. As before, I continue to expect oil prices will struggle to go significantly beyond the $60 to $70 per barrel range in the medium term. US shale companies will likely expand their output with recovering prices and win more market share from inefficient producers, including some OPEC members.

WTI has also hit a key technical resistance area around the $58.80 region which was my previous bullish objective. Here, two Fibonacci extension levels converged with the point of origin of the last significant breakdown back in June 2015. In addition, the RSI created a negative divergence as it made a lower high relative to the underlying oil prices which made a higher high. The technical breakdown here has further unnerved bullish oil speculators. But the key area of support is around $54.95 to $55.20. So long as WTI remains above this zone, the bullish trend would remain intact. However a clean break below this region could pave the way for a much larger correction, especially if this potential breakdown is accompanied by some bearish fundamental news from the OPEC meeting tomorrow. 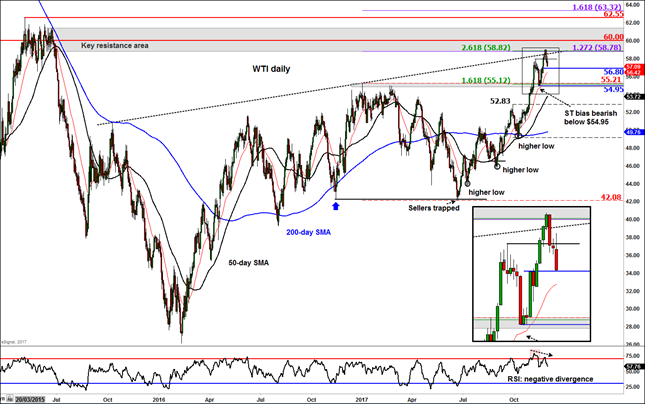