Crude oil has extended its falls for the fifth day. A barrel of Brent oil now costs less than $52 while WTI is at $45.50 at the time of this writing.

Crude oil has extended its falls for the fifth day. A barrel of Brent oil now costs less than $52 while WTI is at $45.50 at the time of this writing. At these price levels, both crude contracts have reached key technical support levels, and so may bounce back a little ahead of the weekend. They have not responded whatsoever to the latest OPEC headlines. According to Reuters, citing a source familiar with the matter, the OPEC and non-OPEC technical committee recommended that producers extend a global deal to cut oil supplies for six months from its June expiry. Speculators are understandably sceptical as they are not sure if non-OPEC members will agree to any new deal. As before, the key concerns is the US, where supply of oil remains excessive. Here, inventories have been climbing to new record high levels recently as shale producers ramped up production again as prices recovered. However demand for crude oil is also robust. Indeed, the US Energy Information Administration (EIA) expects record-high gasoline demand of 9.5 million barrels per day as the driving season shifts into a higher gear. This should help to absorb some of the excess supply. Consequently, I still think that crude prices will be able to rise again due to the efforts of OPEC and some non-OPEC countries to limit oil production, and as demand in the US is set to rise further.

The price of oil has collapsed into a potentially strong support area. As can be seen from the chart, below, WTI has tested the prior resistance and the 61.8% Fibonacci retracement level around the $49.50 area today. Once resistance, this area could turn into support, leading to a potential bounce. However, so far there’s no sign of a bounce so we may see a deeper pullback, perhaps towards the 200-day moving average at just below $49.00, or possibly even the 78.6% retracement level at $48.50. But in the event of a short-term bounce, traders will now need to watch price action around old support and resistance levels such as $49.60, $50.10 and $50.55 as these could now turn into resistance. However if they don’t and especially if the $50.55 level breaks then we may see a strong recovery towards the $55 area in the coming weeks. But at the moment, things look bleak from a technical perspective. 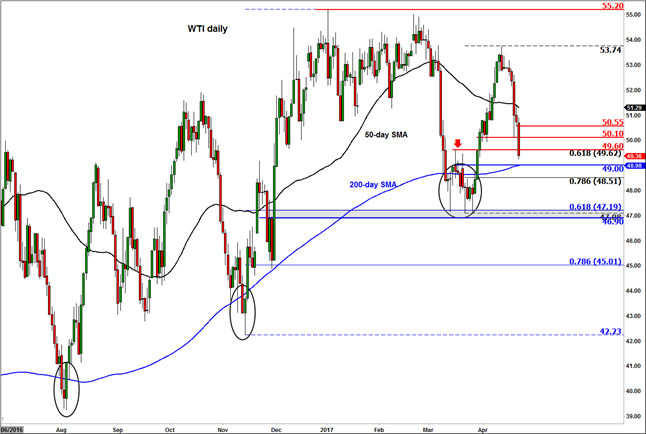