Crude oil prices are lower for the third day, after Brent and WTI both hit new highs for the year on Monday following a sharp kick-back rally in January.

Crude oil prices are lower for the third day, after Brent and WTI both hit new highs for the year on Monday following a sharp kick-back rally in January. The political crisis in Venezuela was part of the reason prices were rising in previous weeks, but this seems to have been priced in by now. In any case, it is likely that other OPEC countries will step up production to compensate for any potential loss from Venezuela due to sanctions from the West. Looking ahead, the 2019 demand outlook for oil is not great, while the prospects of increased shale supply and competition elsewhere could keep the pressure on prices. That being said, the downside could be limited as the OPEC and 10 partner producers outside the cartel are supposed to be actively managing output in an effort to rebalance the market.

In the near term, demand concerns could keep prices under pressure, with China slowing down and concerns are rising over a recession in Germany. In a latest sign of a slowdown in Eurozone’s largest economy, German factory orders unexpectedly slumped 1.6% in December. After a 0.2% decline in the third quarter, some economists predict the German economy to have shrank again in Q4, thus putting it in a technical recession. The official growth figure from Destatis will be published next Thursday. Italy, meanwhile, has already fallen in a recession as its GDP contracted 0.2% in Q4 following a contraction of 0.1% in the July to September period. So, things aren’t great in the Eurozone, and this bodes ill for demand for oil from one of the biggest economic regions of the world. Meanwhile, the latest factory data from the world’s largest economy wasn’t great either on Monday, with orders here unexpectedly falling by 0.6% month-on-month in December following a 2.1% decline the month before.

The very short-term focus will now be on the official US oil inventories data from the Energy Information Administration (EIA) due for release later this afternoon. Last night, the American Petroleum Institute (API) reported inventory data that disappointed expectations with a headline stockpiles build of 2.5 million barrels vs. 1.4 million expected. The potential is therefore there for the EIA data to disappoint expectations today, potentially leading to renewed selling pressure in oil. However, if we see a surprise drawdown then this could potentially cause prices to rebound.

WTI: Breaking down from a bear flag?

From a technical point of view, the latest drop in oil prices could be a worrying sign for the bulls. For one, both Brent and WTI have so far failed to hold above January’s highs. Admittedly, the month of February has just begun. Still, you’d expect to see some immediate follow-through in momentum had the trend still been bullish. For another, the WTI contract is breaking below its short-term bullish channel, or a bear flag pattern if you believe the trend since October is still bearish.

With WTI breaking below the $53.50 short-term support and outside of the flag pattern, the bears would be keen to see if there will be acceptance below this level now. If so, prices could head sharply lower over the coming days with the potential to drop to the next big level at $50.00, or even lower over time. However, if WTI were to go back above the broken $53.50 level now, and hold there on a closing basis, then this would suggest selling pressure was weak. In this potential scenario we could see a quick rally back to towards and possibly above the highs of this year at $55.70s. 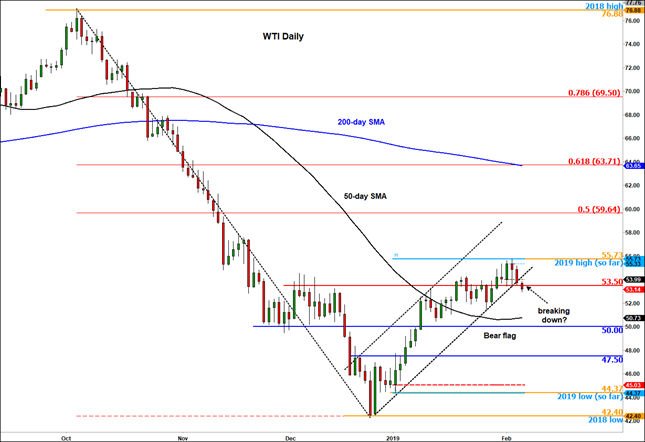