Oil prices found decent support late in the day yesterday to more than make up for the losses they had suffered earlier in the session and on Monday. Consequently, WTI now finds itself up at a good $51.00 and Brent around $52.40 a barrel, their highest levels since Friday. Crude prices remain on course to push further higher due to rising expectations of a tighter oil market as US oil inventories decline and production elsewhere either falls or freezes, while demand grows steadily. At least that is the hope for the OPEC, chief among them Saudi Arabia.

Saudi’s energy minister, Khalid Al-Falih, has claimed that demand from China is not slowing down and that oil prices could stabilise further "if members act collectively" – in other words, collude to restrict supply. And by ‘members’ he presumably also means some non-OPEC countries like Russia. According to Mr Falih, the alignment among oil producers is increasing and that the OPEC cuts will be fair and equitable for all members. Comments such as these clearly suggests the OPEC and probably Russia will cut their production in due course, for if they don’t the consequences could be severe as not only will they lose further credibility but prices may then remain low for a lot longer than would otherwise have been the case. With regards to Chinese demand, Mr Falih is arguably correct. Refining rates in the nation rose last month as 43.8 million tonnes or 10.7 million barrels per day of crude oil was processed, up 2.4% from a year ago, while oil imports rose a new record high of 8 million bpd. There’s also evidence of declining oil production in China where output fell nearly 10 per cent to near its lowest in six years.

Meanwhile in the US, crude inventories have been mainly falling since the month of May with the exception of a handful of occasions. Several sharp and unexpected oil inventory reductions have been reported in recent weeks by both the American Petroleum Institute (API), an industry group, and officially from the US Department of Energy (DOE). Although last week that trend ended with a large build of 4.9 million barrels in US oil stocks, inventories at the storage hubs in Cushing fell sharply, as too did stocks of distillates and – not that they matter much at this time of the year – gasoline. In fact, that large crude inventory build may have been largely reversed last week. According to the API, oil stocks in the US fell by a good 3.8 million barrels last week. What’s more, Cushing crude stocks saw a sharp 2 million reduction and distillate inventories decreased even more profoundly by 2.3 million. If the official DOE data, due to be released later on today, confirm these figures then oil prices could rise further, especially once Brent and WTI clear their technically-important prior swing highs around $52.80 and $51.65, respectively. 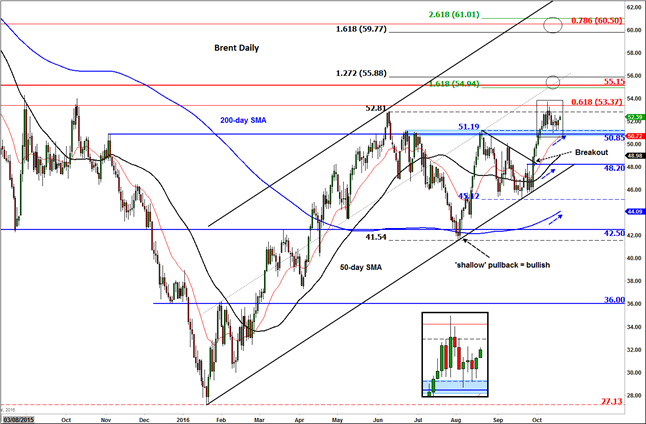 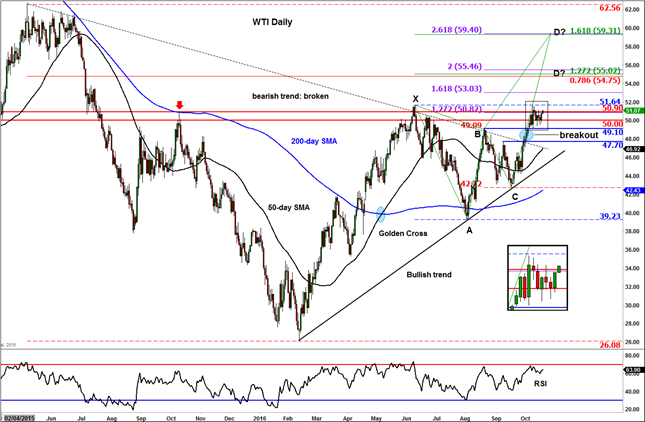