After a sharp 4% jump in oil prices yesterday, both contracts were coming under a bit of pressure amid profit-taking at the time of this writing. Generally speaking, the focus is firmly fixated on next week’s meeting of OPEC with Russia. Because of that, investors are largely ignoring oil-negative news coming mainly out of the US.

After a sharp 4% jump in oil prices yesterday, both contracts were coming under a bit of pressure amid profit-taking at the time of this writing. Generally speaking, the focus is firmly fixated on next week’s meeting of OPEC with Russia. Because of that, investors are largely ignoring oil-negative news coming mainly out of the US. Thus oil prices remain generally supported but inside a market structure that is characterised by lots of false moves and indecisive price action. I am expecting to see further choppy price action until at least after the OPEC meeting.

A growing number of oil analysts seem to agree with the markets that the OPEC will be able to agree on some sort of a deal with Russia to curb crude production. This renewed optimism has been fuelled by the latest comments made by oil ministers of Saudi Arabia and its allied Gulf states. In addition, it is expected that the OPEC will allow Iran to merely limit rather than cut its oil production, which increases the chances for an agreement to be reached.

But whichever way you look at it, the oil market will still remain oversupplied because the OPEC and Russia aren’t going to reduce oil production significantly from these record-high levels. However, news of the potential agreement could still lend decent support to oil prices in the short term outlook. Those potential price gains will likely be capped in the medium term by expectations of renewed rise in oil production in the US.

In the US, drilling activity has been rising sharply in recent weeks, which usually translates into higher oil production at some point down the line. After all, a slightly higher oil price will make marginal increases in production more profitable. What’s more, there won’t be many government restrictions to limit shale producers from ramping up output. President-elect Donald Trump announced last night that all restrictions on shale oil (as well as shale gas and coal) production will be lifted in his first 100 days in the office as part of his protectionist policies aimed at creating jobs. Thus taking everything into consideration, I still hold the view that oil prices will struggle to climb north of $65-$70 for much of 2017 and that the downside will be limited to around $40/45.

From a technical perspective, WTI is stuck in an ugly range though more short-term gains can be expected to be seen if the OPEC were to agree on a production cut. WTI’s recent break above $51 trapped the bulls and below $43 did the same to the bears. Clearly it is not a market for breakout traders at the moment. Retracements within the current range tends to be deep rather than shallow, so expect to find resistance for example between the 61.8 and 78.6 per cent Fibonacci retracements rather than, say, the 38.2% level. Incidentally, WTI has climbed to between its 61.8%-78.6% retracement levels against the last downswing. Here, the previous support level at $49.00 has acted as resistance today. But should this resistance level give way, further bullish objectives to watch are at $50 (also the 78.6% Fibonacci level), $50.90 and then at just shy of $52.00. The key short-term support levels are at $46.55 and $45.75, levels which were formerly resistance on the lower time frames. 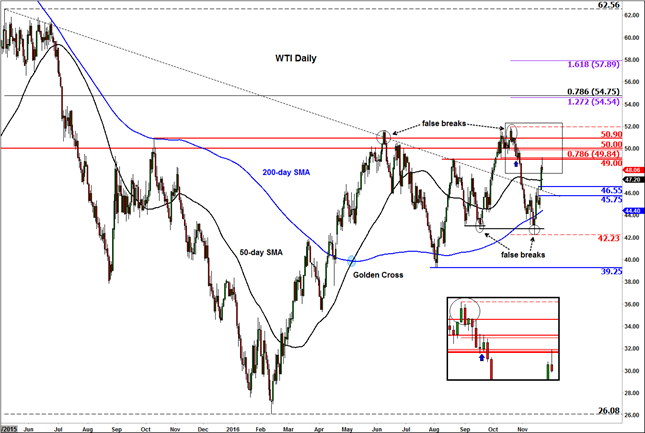