Oil prices were initially weaker at the start of the new week, but they have now recovered to trade almost flat at the time of this writing. At the weekend, the OPEC and some producers outside of the group met to discuss the progress of their oil production deal. The cartel reported that it was near its target of cutting 1.8 million barrels of crude oil per day, and shrugged off threats that the US may be cutting oil imports after Donald Trump promised to make the US energy self-sufficient. Instead, Saudi’s oil minister, Khalid Al-Falih, said the US is “closely integrated in the global energy market.”

In all honesty, it is unreasonable to expect Mr Al-Falih to say anything different. Of course he is going to say that the OPEC’s production cuts are going well, even if that is not necessarily the case. He knows full well that another surge in US shale supply is coming, as indicated for example by the rising rig counts. Any chance for Mr Al Falih to jawbone oil prices higher, he will.

That being said, it could be several months before we see US oil production respond (positively) in a meaningful way to higher oil prices. Shale producers may allow the oil market to fully rebalance before increasing production once again. So, it is far too early in my view for the impact of renewed rise in US oil production to be reflected in falling oil prices.

In fact, both oil contract remain – for the time being – above their respective key support levels. Brent has repeatedly defended the broken old resistance at $54, while WTI has held its own above the $50.80/$51.00 area again. Thus, we haven’t yet seen any break in market structure of higher highs and higher lows. The trend therefore remains bullish for oil until the charts say otherwise. Some key technical levels are shown in the charts – red means resistance, blue support. 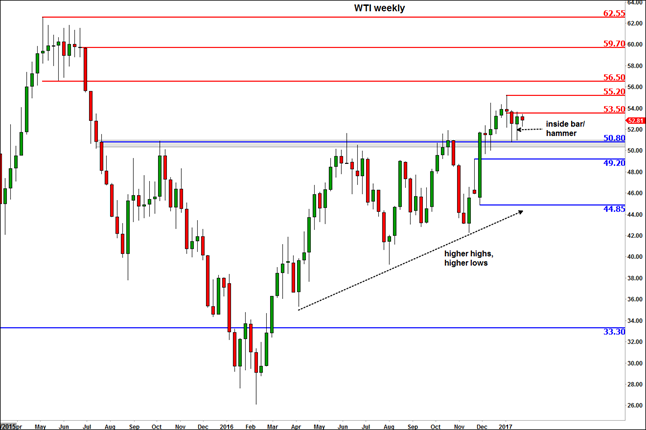 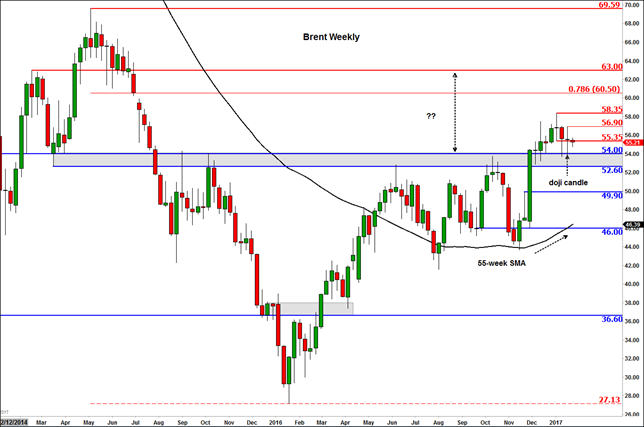