Crude oil ready to bounce back?

Over the past several days, bearish speculators in Brent oil have had little success at pushing prices below $45.00. This is because we are in a range-bound market and oil prices have reached the lower end of the current range. Thus, we may see a rebound in oil prices towards $50 or higher again, ahead of the OPEC meeting at the end of the month.

Over the past several days, bearish speculators in Brent oil have had little success at pushing prices below $45.00. This is because we are in a range-bound market and oil prices have reached the lower end of the current range. Thus, we may see a rebound in oil prices towards $50 or higher again, ahead of the OPEC meeting at the end of the month. Although there is so much doubt about the prospects of a production cut or freeze deal between the OPEC and Russia, an agreement is still possible. This will probably keep oil prices higher than would be the case if the markets were completely convinced that there will be no deal on oil production come the end of the month. Meanwhile in the US, WTI is likewise holding around the $45 per barrel mark. News of a larger-than-expected weekly build in US oil inventories failed to have a meaningful impact on WTI as speculators welcomed the declines in stocks of oil products: gasoline and more importantly for this time of the year, distillates.

For Brent, the area around $45.00 is where it had previously found strong support from. Here, we also have the rising 200-day moving average coming into play. In addition, the momentum indicator RSI has started to move away from the “oversold” levels of 30 or lower. Thus, momentum is with the buyers again. Indeed, after Wednesday’s sell-off, the failure of price to hold below the prior low of $45.15 clearly highlights the fact that the sellers are not willing to commit to those levels. While this could still turn out to be a false hope for bullish speculators, the bears should be taking no chances here as the trend since the beginning of this year has been more or less bullish, even if the break of the rising trend line means the strength of the trend has weakened.

With the markets moving from one area of liquidity to another, and with the selling evidently overdone, I think that it is only natural that Brent oil will now aim to test the next area of liquidity above $46.90, which was previously support and resistance. In other words, this is where lots of stop buy orders are probably residing: from the previous sellers protecting their unrealised profits and also from momentum-chasing speculators looking to get back on the long side. If this area breaks and price holds above it, then expect to see a quick recovery towards $49.00 where the mid-point of the current range meets the 50-day moving average and the backside of the broken uptrend. Above $49.00, the next level to watch is the psychologically-important $50.00 where we also have the 61.8% Fibonacci level converging. 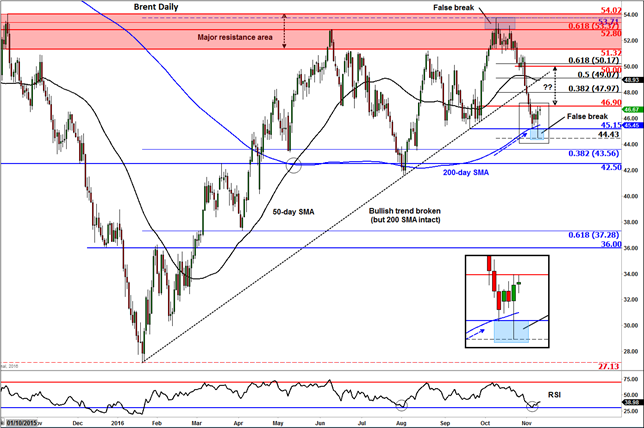