Crude oil rebound could be short-lived

Oil prices rebounded yesterday afternoon after they had fallen sharply to fresh multi-week lows earlier on the day.

Oil prices rebounded yesterday afternoon after they had fallen sharply to fresh multi-week lows earlier on the day. By Wednesday morning, oil prices had made back about 50% of their weekly losses but remained vulnerable amid ongoing worries over demand and signs of excessive supply. Positive sentiment towards risky assets (with stocks also rising sharply today) was keeping the bears at bay, for now.

On the demand side, there are plenty of reasons for oil investors to be concerned about. The ongoing trade war between the world’s largest economies has hurt China perhaps more than the US. But a few signs of a slowdown have now emerged in the US too – not least the ISM’s manufacturing purchasing managers index, a key factory gauge, which unexpectedly contracted for the first time since 2016. This caused the dollar to drop sharply, although it has so far been shrugged off by equity and oil market participants. But if we see more evidence of a slowdown in the US, then demand concerns could come to the forefront once more.

Meanwhile, on the supply side, we have also seen some bearish developments. According to a survey by Reuters, OPEC’s crude oil production increased by 80,000 barrels in August. The rise was attributable to production increases in Iraq and Nigeria, while Saudi also lifted its output although the latter is still over-complying with its share of the agreed production quotas. However, Russia produced more oil than the agreed cap, with output here rising to 11.29 million bpd in August from 11.15 million bpd in July.

Reflecting the above fundamental worries, WTI has been trending lower ever since it peaked around $66.50 in April. It has subsequently created a number of lower lows (hence the formation of a bearish trend line), with price also holding below the 200-day moving average. So far, though, the downside has been limited with support at $53.00 holding firm after yesterday’s drop. WTI was testing resistance around $54.35/40 at the time of writing. If the sellers defend this level, then we could see WTI drop below $53.00 at the third time of asking.

However, if the aforementioned resistance breaks then we could see a potential squeeze towards the next resistance around $55.45, which comes in just below the bearish trend line. 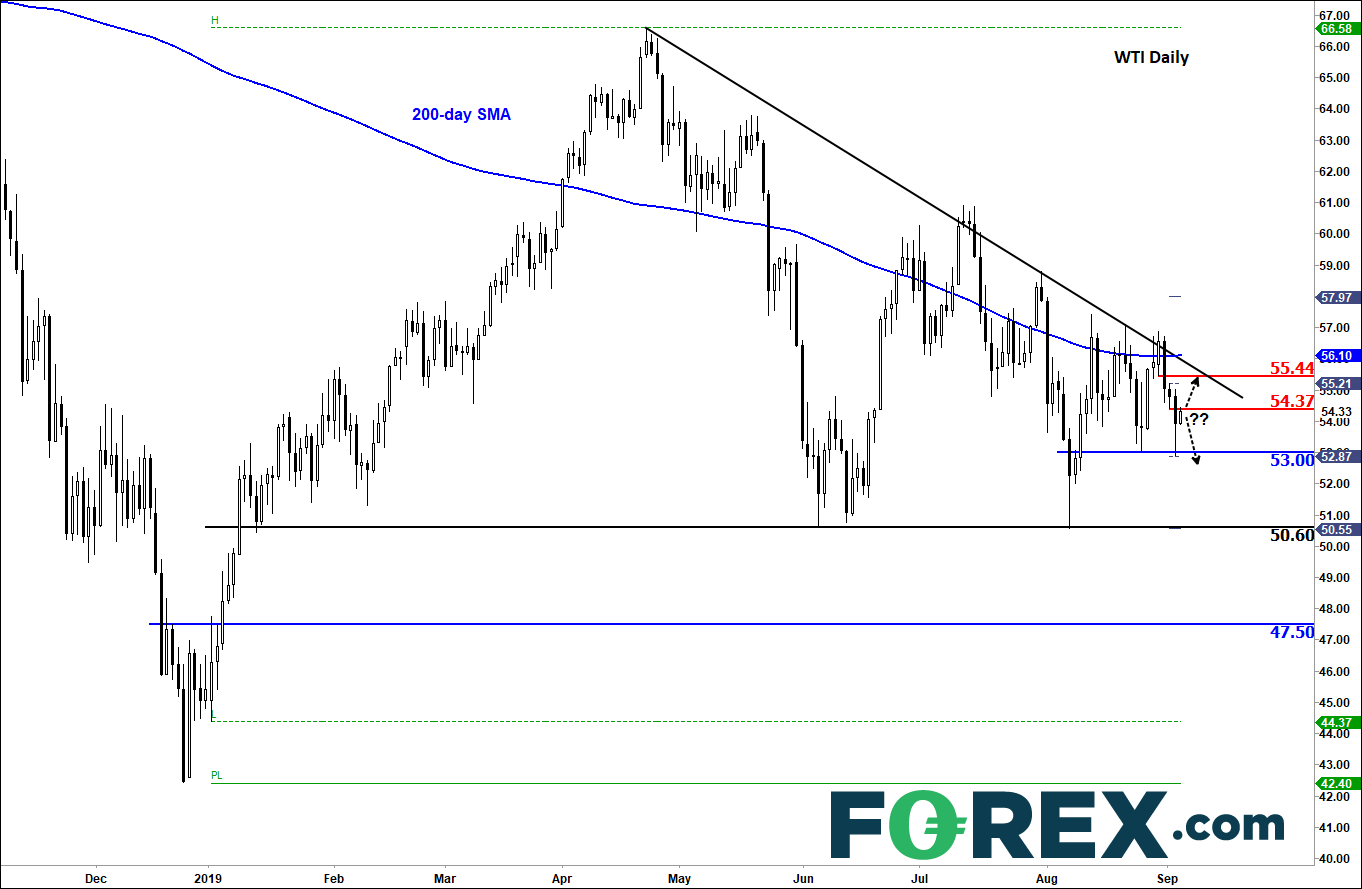