<p>There is no doubt that crude oil has been in a dramatic rebound since late January. In the case of the Brent Crude benchmark, price has risen by more than 60% in less than three months from its January lows below 27.00 to this week’s highs above 44.00.</p>

There is no doubt that crude oil has been in a dramatic rebound since late January. In the case of the Brent Crude benchmark, price has risen by more than 60% in less than three months from its January lows below 27.00 to this week’s highs above 44.00.

Much of this rise in the past three months has been due to two key factors: 1) There has recently been much speculation over a potential deal to cap crude oil production levels among Russia and several major OPEC nations, most notably Saudi Arabia. 2) Due to progressively and persistently weaker oil prices over the past several months, there has been a marked attrition in US oil output, providing some measure of respite to other major oil producers as well as to oil prices.

Aside from lower US output, the most pressing and concrete factor that could potentially either further the recovery in oil or stop it dead in its tracks is the highly-anticipated output deal negotiations, set for this Sunday, April 17. Much back-and-forth speculation has occurred in the months running up to this meeting, with often-conflicting reports on the shifting stances of various participants. As it currently stands, prevailing expectations are that Saudi Arabia and Russia will probably agree, perhaps loosely, to an output cap, even without Iran’s participation. Although this was reported within the past few days, it seems an unlikely outcome. If it does turn out to be accurate, however, such a deal will likely lead to a further boost for crude oil, at least in the very short-term.

So what happens after Sunday’s meeting? Clearly, a failure to reach such a deal would most likely lead to a significant drop in prices that could be sustained for quite some time, given all of the continuing supply pressures that have weighed on crude oil for so long. Even if a deal is successfully reached, however, the question remains as to whether a coordinated production cap at the recent near-record output levels would do much to alleviate the oversupply situation, especially without Iran’s participation. There is much doubt surrounding the expected effect of such an output cap which, it should be noted, would not be an actual output cut. Therefore, even if a deal is reached and it results in a short-term boost for oil, the longer-term picture still remains murky to significantly bearish. This is especially the case in light of recent reports out of the US that have detailed a much higher-than-expected build in crude oil inventories. Given the ongoing oversupply issue that continues to pressure prices, the potential effectiveness of a coordinated output deal is highly questionable.

From a technical perspective, the Brent Crude benchmark continues, for the time being, to trade in a sharply rising short-term trend channel. Within the course of this rising trend channel, Brent broke out above a much larger descending trend channel in March, followed by breakouts above successively higher resistance factors. These factors include the key 40.00 psychological level, the 200-day moving average, and most recently, major prior resistance around 42.00. With any further short-term surge, the next major upside resistance resides at the 46.00 level. From a longer-term perspective, or if a convincing output deal is not reached, however, a failure to curtail oversupply could result in a return below 40.00. In this event, a retreat in oil prices could quickly lead to Brent trading in the mid-30’s once again. 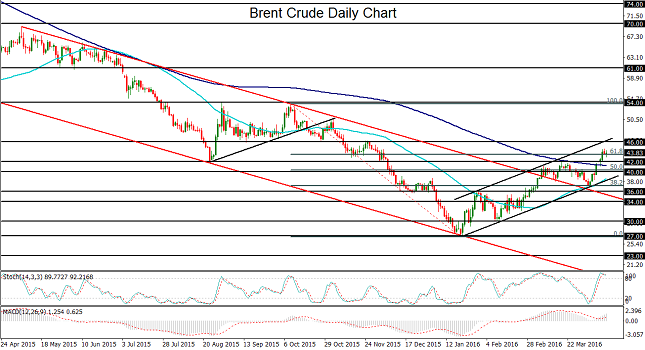