This projection, an optimistic positive for the currently oversupplied oil markets, helped to reinforce Friday’s US rig count data, which showed the numbers of oil rigs in the US having fallen to their lowest level in more than six years.

Further supporting oil prices at the beginning of this new trading week has been continuing speculation from the past few weeks over a proposed OPEC/non-OPEC output freeze that could potentially help limit production around January’s already-elevated output levels.

This series of oil-positive developments provided a glimmer of hope that crude could possibly overcome its currently rampant oversupply problem, weather the specter of potentially waning global demand, and rise further from its multi-year lows. These hopes significantly boosted both the West Texas Intermediate (WTI) US benchmark as well as the Brent Crude international benchmark for crude oil on Monday.

While an extended rebound based upon these optimistic developments could very well be in store for crude oil, however, a major recovery is considerably less likely. This is due to the perspective that the sheer magnitude of global oil oversupply conditions poses an exceptionally large obstacle to a price recovery, and any moderate restraint or reduction of output may simply be inadequate. With that being said, any future agreement that potentially develops into actual coordinated production cuts among major oil-producing nations should very likely lead to substantially higher prices.

Besides the fact that the recent rise of crude oil prices has primarily been based simply upon projections and speculative conjecture, the WTI benchmark has approached major upside resistance around the $34.00 level. This approach occurs after price action broke out above its 50-day moving average for the first time since November. Previously, prices reached that $34.00 level in early January before retreating back down to hit new multi-year lows. If WTI turns back down once again at or near that resistance, a revisit of the $30.00 level should be likely. From there, any further breakdown could once again target the key $25.00 support area, last approached less than two weeks ago. In the opposite event that further positive developments boost WTI above the $34.00 resistance level, major upside resistance resides at the $38.00 level. 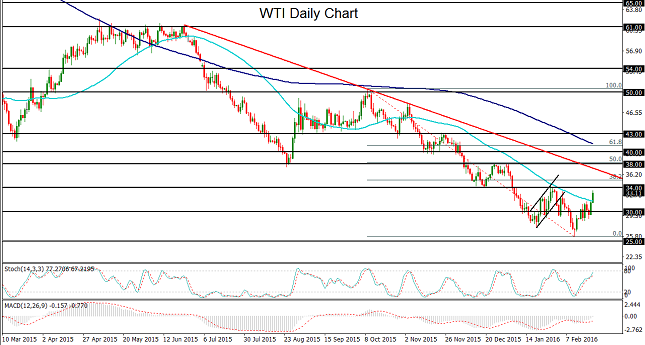