Following last week’s relatively heavy losses, crude prices rallied yesterday and both oil contracts were sharply higher again today with Brent trading around $49.50 and WTI almost at $48.20 at the time of this writing. Sentiment on the oil market turned positive when Saudi Arabia’s energy minister announced yesterday that his country's oil exports will be reduced by a good 600 thousand barrels per day in August to 6.6 million bpd.

Following last week’s relatively heavy losses, crude prices rallied yesterday and both oil contracts were sharply higher again today with Brent trading around $49.50 and WTI almost at $48.20 at the time of this writing. Sentiment on the oil market turned positive when Saudi Arabia’s energy minister announced yesterday that his country's oil exports will be reduced by a good 600 thousand barrels per day in August to 6.6 million bpd. This was not only in response to some OPEC nations producing more oil than agreed, but also an attempt to help reduce inventories in the US. According to the EIA, deliveries of crude oil from Saudi Arabia since the start of June has fallen by around 450,000 barrels a day. If the upcoming US oil inventories reports from the US show stockpiles had fallen further last week, then oil prices could rise further.

Ignoring this week’s rally and to put things into perspective, oil prices are still stuck inside their wide ranges. While I still believe that crude is carving out a major bottom, this process could still take a lot longer than expected. Things could happen to negatively impact sentiment again. For example, if other larger OPEC members follow Ecuador’s footsteps and no longer want to comply with the production cuts then the whole deal could collapse. However if they stick to the plan then global oil inventories should fall and prices recover over time, which is our base case.

As I have mentioned before, both oil contracts are trading around the middle of their wide ranges. For WTI, the range has been between around $40 to $55 per barrel. The US oil contracts has been stuck in this range since early last year. In these range-bound conditions, it is difficult to predict with a high degree of confidence where oil prices will be heading using technical analysis alone. Nevertheless, within the consolidation, price action in the near-term appears to be slightly more bullish than bearish. WTI has now formed a couple of higher lows and higher highs ever since it reclaimed the broken swing point at $42.20/5 area. This is characteristic of bullish price action as it shows the sellers are trapped. Thus, oil is likely to continue heading higher until it creates a clear reversal sign, or breaks the bullish structure and creates a lower low. The last significant low was at $43.80 for WTI, while this week’s low comes in at $45.40/5 area. 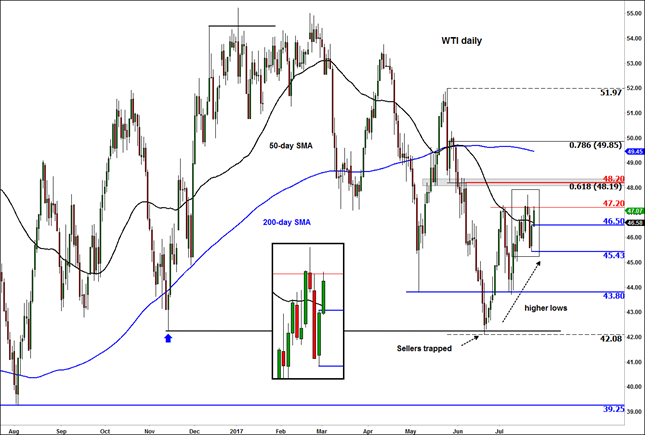