Crude oil prices have been on a roller-coaster ride to absolutely nowhere in recent weeks. It appears as though the buying and selling pressure in finely balanced. Bullish speculators are encouraged to remain in the game because of the OPEC’s efforts to reduce supply. Bearish traders are encouraged by signs of renewed rise in oil production in the US.

Crude oil prices have been on a roller-coaster ride to absolutely nowhere in recent weeks. It appears as though the buying and selling pressure in finely balanced. Bullish speculators are encouraged to remain in the game because of the OPEC’s efforts to reduce supply. Bearish traders are encouraged by signs of renewed rise in oil production in the US. Here, rig counts and oil inventories have been rising sharply in recent weeks. Indeed, according to the US Department of Energy, crude stockpiles rose by a further 9.5 million barrels in the week ending February 10. This was higher than the build of 3.7 million barrels expected, but slightly lower than the American Petroleum Institute’s (API) estimate of 9.9 million barrels published last night. As a result, oil prices didn’t move much in response as they were already on the retreat in reaction to the API data.  So, the uncertainty continues and ranges will likely dominate the agenda. I still think that oil prices will likely rise further to new 2017 highs in the near-term outlook, than, say, drop by 5 bucks.

Given the lack of volatility in recent weeks, it helps if we don’t focus too much on static noise and instead concentrate on the bigger picture. So, as can be seen on the weekly chart, WTI continues to make higher highs and higher lows and remains somewhat comfortably above the pivotal $50/51 range, which had been resistance in the past. Thus the path of least resistance on the higher time frame is still to the upside and will remain so until the chart says otherwise. Last week’s long-legged doji candle highlights the lack of willingness from the sellers to hold onto their positions. If WTI were to break above the $54.30 resistance level this time, then it may stage a more meaningful rally. After all, the multi-week consolidation has allowed the short-term oscillators to unwind from “overbought” levels through time rather than price, which is technically very bullish. 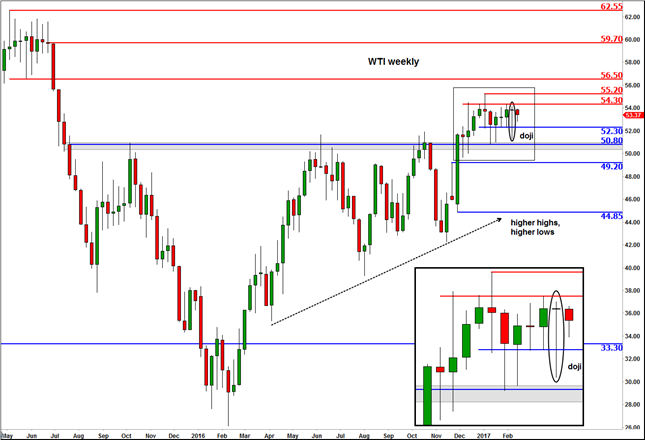