Sunday’s meeting of crude producers in Doha ended without any agreement to curb oil production. The reaction of oil prices has been logical: a six per cent gap down at the open overnight. Oil prices have since rebounded strongly off their lows, in part due to short covering. Clearly, many people were surprised that after so much talk, a 'freeze' deal, which had looked imminent last week, failed to materialise. At the end, Saudi Arabia’s position to maintain market share was the reason talks collapsed as it wanted all major non-US producers – in other words, Iran – to be part of any freeze deal. But I wonder how such a deal would have changed the fundamentals in any way. As Oman's oil minister said, many oil producers with the exception of a few such as Iran are already at peak production capacity anyway. A deal to freeze oil production at these peak levels would therefore not have helped to immediately reduce the supply glut significantly quicker than would be the case now. In fact, one could argue that by maintaining the status quo and with oil prices being notably higher than back in January and February, there was less motivation for the Saudis to compromise as they can afford to play out their strategy of driving weaker US shale oil producers out of business. Now that US oil output is finally responding to the significantly weaker oil prices, the market can, over time, re-balance itself anyway without the need of intervention from the OPEC and Russia.  That being said however, a deal to freeze production could have sped up the rebalancing process slightly.

Going forward, it is possible that Brent and WTI prices may go on to completely 'fill' their weekend gaps before deciding on their next moves. Many sellers were probably uncomfortable initiating bold positions this morning after such a big drop and so they were/are probably waiting to enter or reload at better prices. Meanwhile some bullish speculators may also wait and see out the initial reaction in order to gauge the market's strength or otherwise before deciding whether or not to step in at this stage. So, the initial reaction that we have seen does not say much about oil's next likely move, although the lack of a more significant drop so far does bode ill for the bears. If such a development fails to dent prices much and the market is able to absorb it then we may actually see higher oil prices in the coming days. But if oil turns around later on and close at or near its lows then this would suggest that there may well be further momentum left behind this downward move which could take several further days to play out.

This morning I conducted a poll on Twitter and asked our followers what price the Brent contract is likely to be at by Friday’s close in light of the production freeze failure. Of those who have so far responded, 58% think it will settle below $40 a barrel by Friday’s close; 14% think prices are heading above $45 and 30% think it will close within this $40-$45 range.

A deal to 'freeze' oil production failed. What price is Brent crude likely to be at by Friday's close?

From a technical point of view, Brent was trading at $41.60 at the time of this writing after it had ‘filled’ most of the weekend gap. It had since run into some resistance at prior support and resistance level of $42.45/50 area. This is a pivotal level. If Brent were to rise back above this level on a daily closing basis then it would suggest that the buyers have remained in control, which could then see oil head towards $45 again. On the other hand, if resistance holds here, a move down towards $40 would become likely. Generally speaking, while it holds within the bullish channel, the technical outlook on Brent would remain positive. A move out of the channel could see Brent drop to its 50-day moving average at $38.15 where it will also meet the 38.2% Fibonacci retracement level against the most recent multi-year low. 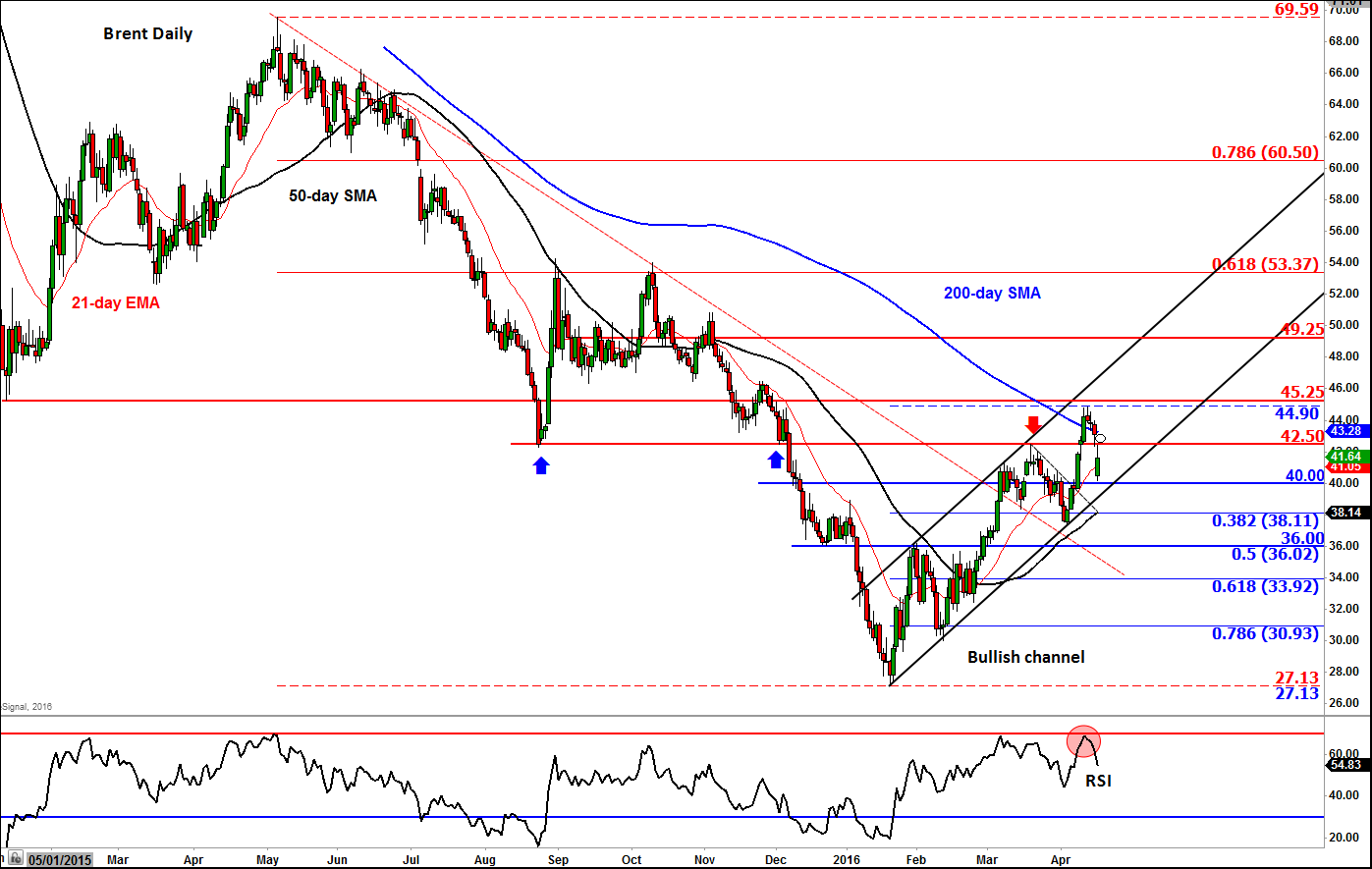