The following report is a guest contribution from Youwei Yang, PhD. Youwei is the Director of Financial Analytics at StoneX. In the coming weeks, we look forward to bringing you more of this deep-dive, institutional-level research from our partners at StoneX. If you find this report interesting, please consider subscribing to Youwei’s research directly to receive all of his insights directly and review past reports.

We have lightly edited the text for clarity.

The U.S. Senate approved an increase to the debt ceiling for another 8 weeks until December, indicating at least another short period of macro easing. Fed tapering may start shortly, while somewhat priced in already. Inflation and interest rate hike discussions continue, and a firmer indication could be more impactful in the months to come. China has again becoming the major country to watch with real estate debt default, trade talks, and military activities near Taiwan all garnering headlines.

An easing macro policy environment like now is generally bullish for markets, especially cryptoasset markets, as some claim bitcoin is an inflation hedge. However, readers should be wary of their current risks, especially with global markets at all-time highs during a period of transition after the initial pandemic panic last year.

Along with the stock market, cryptoassets were on a downturn in September, especially as cryptoassets were hit with another Chinese ban on crypto trading, following on the back of the mining ban in May. The SEC and other government agencies seemed to have issues with decentralized exchanges and stable coins. However, all these regulations seem to have only a limited impact on cryptoasset prices.

After a few weeks of consolidation, Bitcoin has climbed 40% from $40K to $56K last 10 days, crossing and staying above the major resistance level of $52K. Not surprisingly the whole crypto universe with thousands of different altcoins has seen big boost, with the overall market capitalization of all cryptoassets rising from $1.8 trillion to $2.3 trillion. Interestingly, the mainstream coins are losing their money to flow into BTC and ETH for the pump, then slowly catching up the momentum. It again refers back to our prior article’s discussion of sector rotation where the valuable, established tokens are the first to move, followed by smaller and “memecoins.” That said, SHIB, an alternative to DOGE and one of the major memecoins, has risen more than 300% over the last week, stimulating the market momentum again. 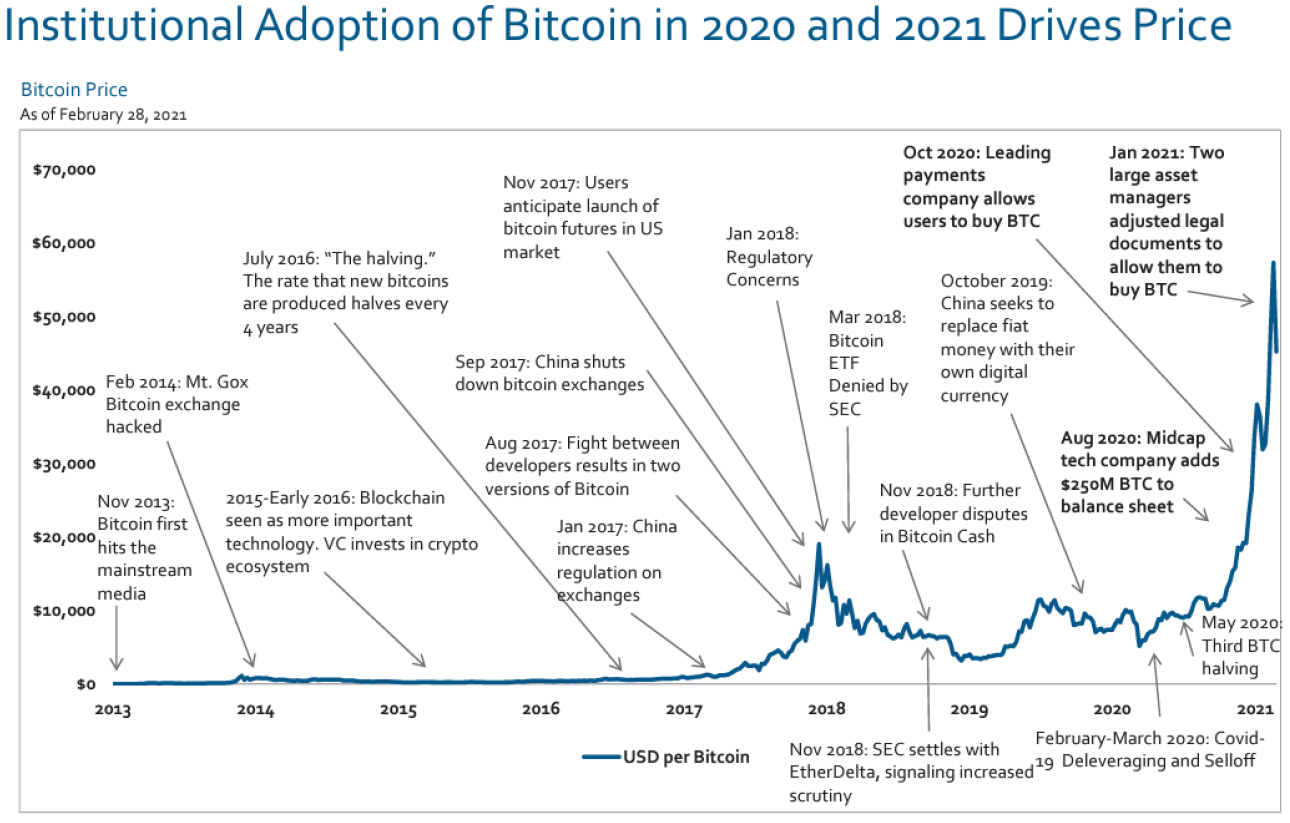 What's causing the crypto market to pump besides the macroeconomic environment?

The rise of institutional adoption is one major catalyst:

The SEC approved an ETF for 'Bitcoin Revolution Companies', including Tesla, PayPal, Twitter and 20+ others.

Purpose ETF, Grayscale, and the Bitcoin Fund holdings are all experiencing money inflows. 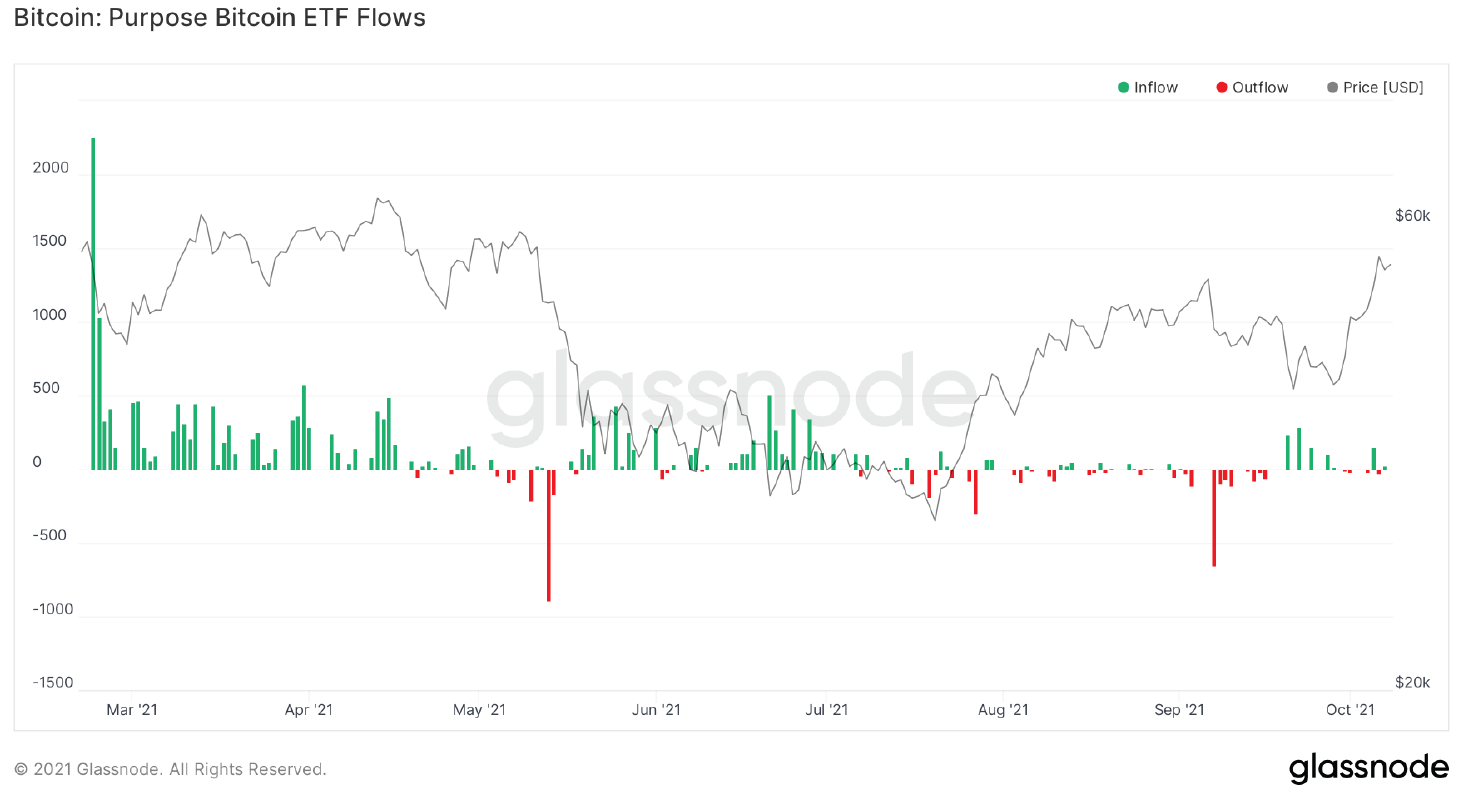 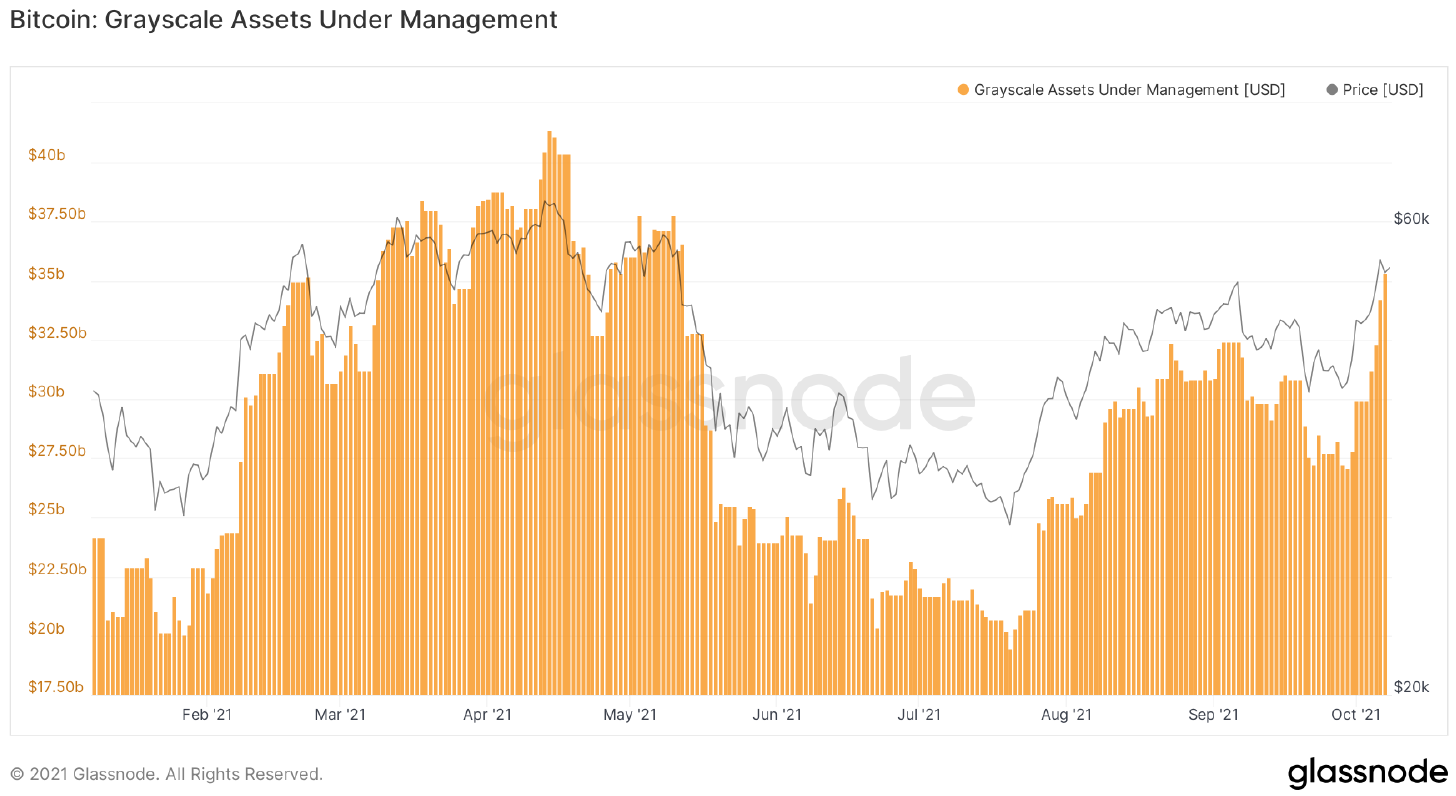 The sentiment is still in Greed (74) following the pump and excitement for a super Q4. Google search trends, tweets, YouTube views and other social media coverage is rising again. The pump and exciting news have firmed the market confidence and thus momentum. One key indicator among retail traders, the Stock-to-Flow (S2F) model, is staying on track, exciting the sentiment for an “Up-tober”:

Bitcoin long-term HODLers rose in September and continue to cause a supply shock. On-chain analysis indicates the continual growth in underlying usage, confirmed blockchain transactions continue to grow since July: 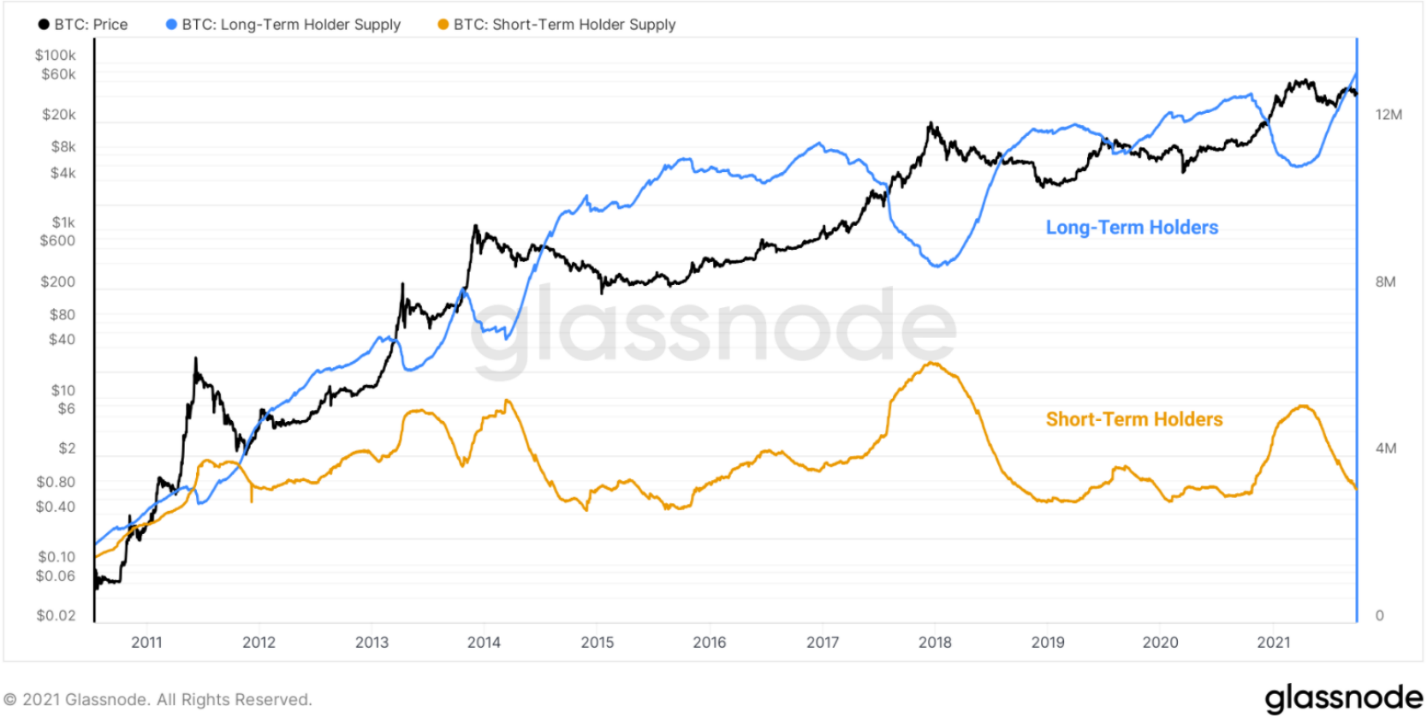 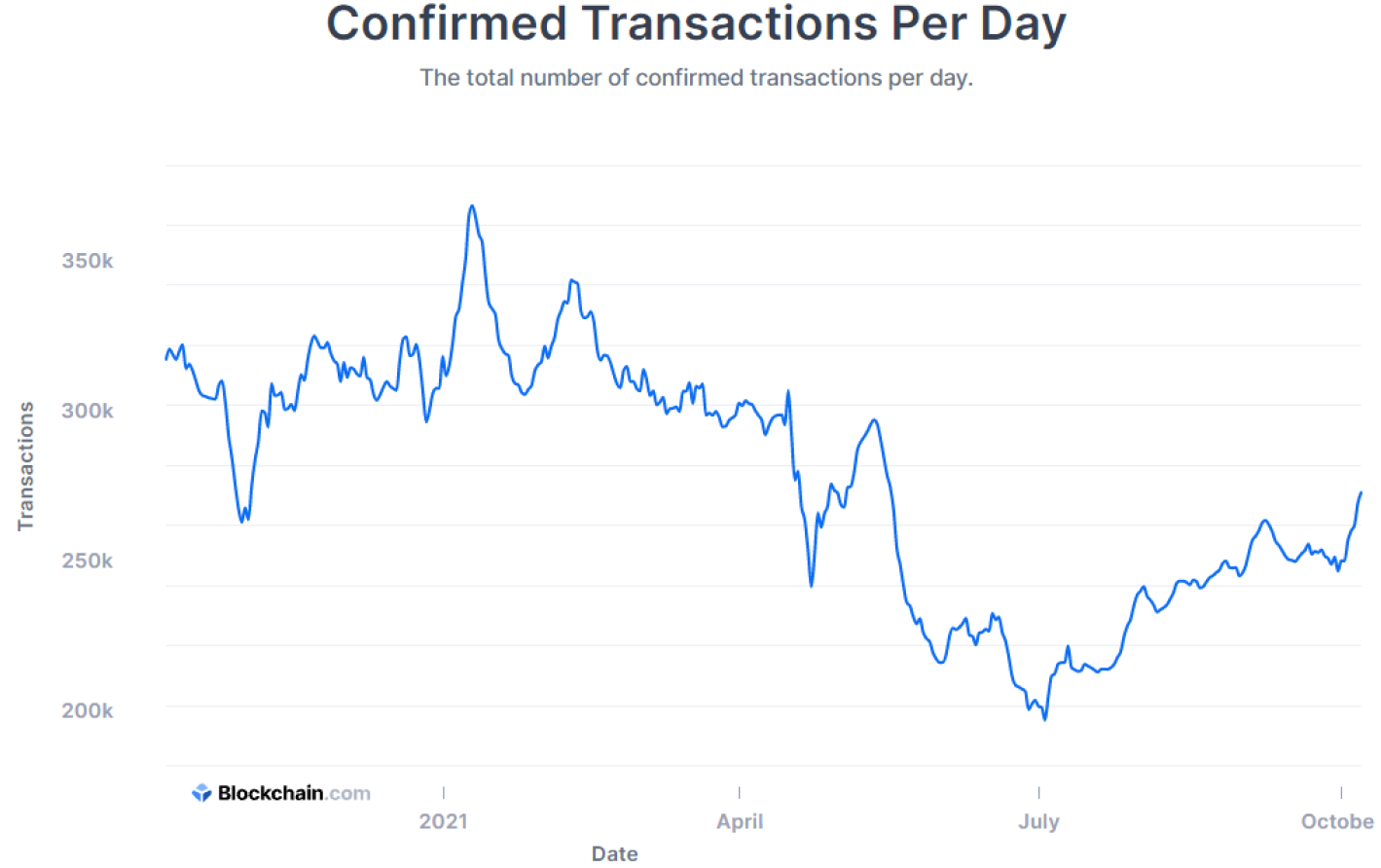 With a supportive macroeconomic backdrop, positive money flows, and increasing adoption, there’s reason for optimism around “Uptober” in the crypto markets, but traders should keep a close eye on sentiment in case it reaches extreme levels this month.

If you enjoyed this report, please consider subscribing to Youwei’s research directly to receive all of his insights immediately and review past reports.