Currency Pair of the Week: AUD/JPY

Buyers will be waiting for a dip to buy, as the RSI will then fall back into neutral territory.

The Reserve Bank of Australia (RBA) meets this week at the September Interest Rate Decision meeting.  At the meeting in August,  the RBA left rates unchanged at 0.25%.  However, the Central Bank decided to start buying 3-year bonds, something it hadn’t done since May.  At the time, the RBA was very concerned about the economic impact of the coronavirus outbreak in Victoria. However, on Monday, Australia reported the lowest number of new cases since July 3rd. This comes as Melbourne enters the fourth week of a six-week lockdown.  Expectations are for unchanged at the meeting this week.  Although the Australian Dollar is strong, the RBA has indicated that it is not overvalued.  As the currency pushes higher against many currency pairs, the surprise would be if the RBA were to be more dovish than expected.

Japan’s Prime Minister, Shinzo Abe, announced last week that he is stepping down due to health issues after nearly 8 years in office.  The Liberal Democratic Party must now find a replacement; however, expectations are that one won’t be found until mid-September.  PM Abe said he would remain in office until a replacement was selected.   After the announcement, the Nikkei and USD/JPY sold off as fears spread that “Abenomics” would fade after he left office.  This three pronged approached included large-scale monetary easing, fiscal spending, and structural reforms.  Markets have since bounced back since Friday’s selloff.

AUD/JPY has been on a tear since putting in a low at 59.87 on March 19th.  The pair screamed higher to 76.78 on June 8th, before pulling back.  AUD/JPY has been consolidating in a rising triangle formation before posting a false breakdown early last week.  The pair fell below the rising trendline from June 22nd  and pushed higher above the June 8th highs on August 27th!  The pair is currently trading near the 1.272%  Fibonacci extension from the June 8th highs to the June 22nd, above 77.91.  The next resistance level is the 161.8% Fibonacci extension from the same periods near 79.35, then the psychological resistance level at 80.00, and then horizontal resistance from April 2019 near 80.50. 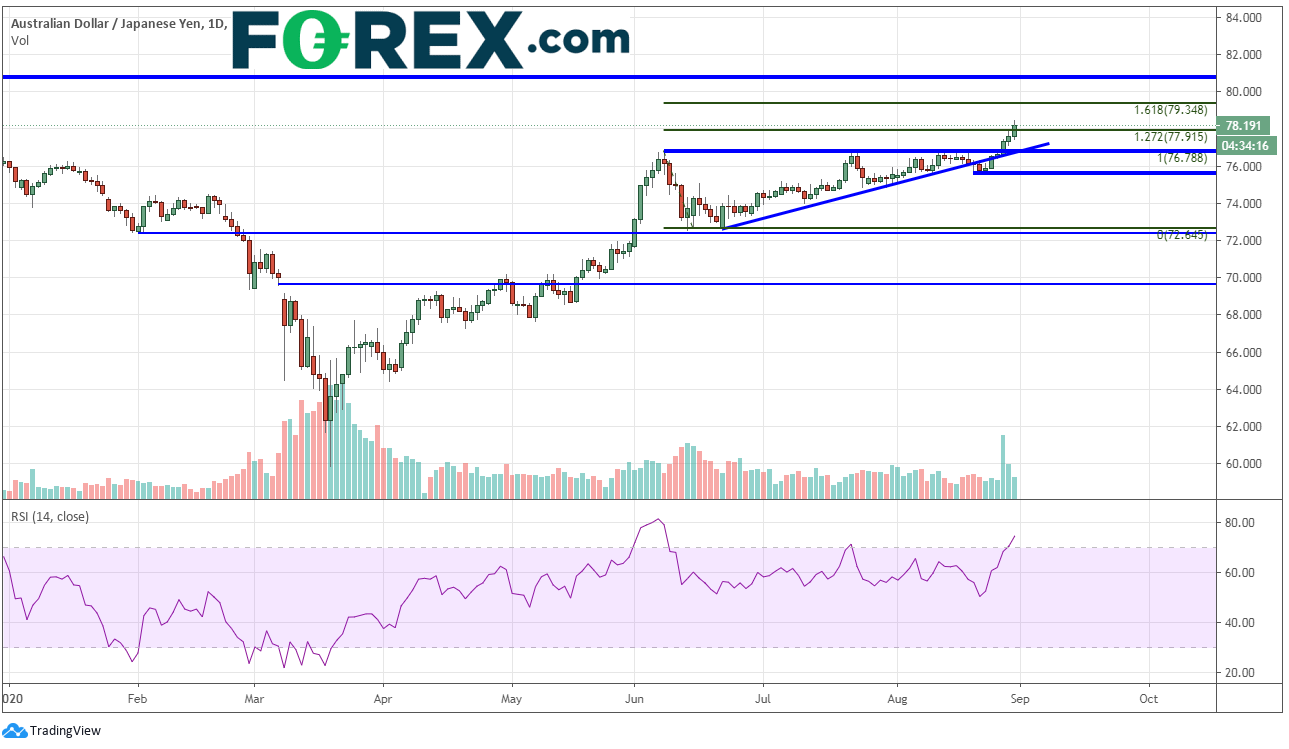 On a 240-minute timeframe, the RSI is in overbought territory and pulling back as price continues higher, clearly forming divergence.  The current candle is also forming a shooting start formation, indicating a possible reversal (however we cannot definitively call this a shooting star until the timeframe for the bar is complete).  Support is back at the 127.2% Fibonacci extension mentioned above at 77.91, then the confluence of support (horizontal and rising trendline) near 76.79.  Below there is horizontal support near 75.60. AUD/JPY is worth watching this week.  Buyers will be waiting for a dip to buy as the RSI will fall back into neutral territory.  Watch for volatility around the RBA meeting and any rumors of Abe’s successor!