Currency pair of the week: USD/CAD

Joe Biden will be sworn in as President of the United States in Wednesday, however this is more likely to be a ceremonious event than a market moving event for traders.  There are other events this week that are more likely to influence the US Dollar, one of which is former Fed Chairman Janet Yellen’s confirmation as Treasury Secretary on Tuesday.  Senate members are expected to ask her about the administration’s stance on the US Dollar.  Although Yellen is expected to not be as aggressive as Trump on supporting a weak US Dollar, she is most likely not going return to the days of a strong dollar policy.  Instead, Yellen is likely to consider the G-7 stance, which is that markets will decide the value of exchange rates.  In addition, this week,  global manufacturing and services PMIs will be released for January.  As many of countries in the UK and European Union were in lockdown,  the initial PMI data is expected to be worse than in December.  However, given that the US was not in national lockdown, the US PMI data may be better relative to other county’s data.  This may give a boost to the US Dollar.

The Bank of Canada (BOC) will meet this week to discuss monetary policy.  Canadian rates currently sit as 0.25% and the current pace of the QE program is at least CAD 4 billion per week.  Although Canada has recently gone through its own bout of lockdowns, housing and manufacturing data have continued to be strong.  However, employment data has been weaker.  Expectations are for the BOC to leave policy unchanged, however there is the outside chance they may lower rates below 0.25%.  In addition,  over the weekend, Joe Biden’s Day 1 initiatives showed that one of these initiatives is to rescind the Keystone XL pipeline permit, which carries oil from Canada’s Alberta region to several US states.  The Obama administration had opposed the pipeline and Biden opposed Trump in 2017 when he issued the permits in 2017.  Canada has yet to respond, however given that the price to the Canadian Dollar is strongly correlated to the price of Crude Oil, this could cause some volatility ahead for the pair.

On a weekly timeframe, USD/CAD has traded from a high in March of 1.4667 to recent lows near 1.2713.  In doing so, price has been in a descending wedge since early fall 2020.  USD/CAD traded down to the 161.8% extension of the move from the lows during the week of August 31st to the highs during the week of September 21st.   This level, near 1.2743, confluences with the apex of the descending wedge.  The pair is currently testing the top downward sloping trendline of the descending wedge near 1.2770.  In addition, the weekly correlation coefficient between USD/CAD and crude oil is -0.90.  For reference, a correlation coefficient of -1.00 means that the 2 assets are perfectly negatively correlated and move in opposite directions 100% of the time.  A reading of -0.90 indicates that the negative correlation between the 2 assets is very strong on the weekly timeframe.  If crude oil begins to weaken, that could help push USD/CAD higher above the trendline near 1.2800.  Next resistance is a downward sloping trendline and a series of previous lows near 1.2990. On a shorter 240-minute timeframe, price broke above the top trendline of a downward sloping channel the pair has been in since late November.  If price breaks above recent highs at 1.2840, it would set up a double bottom formation, with a target of 1.3040.  Short-term support is at the downward sloping trendline near 1.2750, horizontal support near 1.2624, and then the double bottom low near 1.2624. 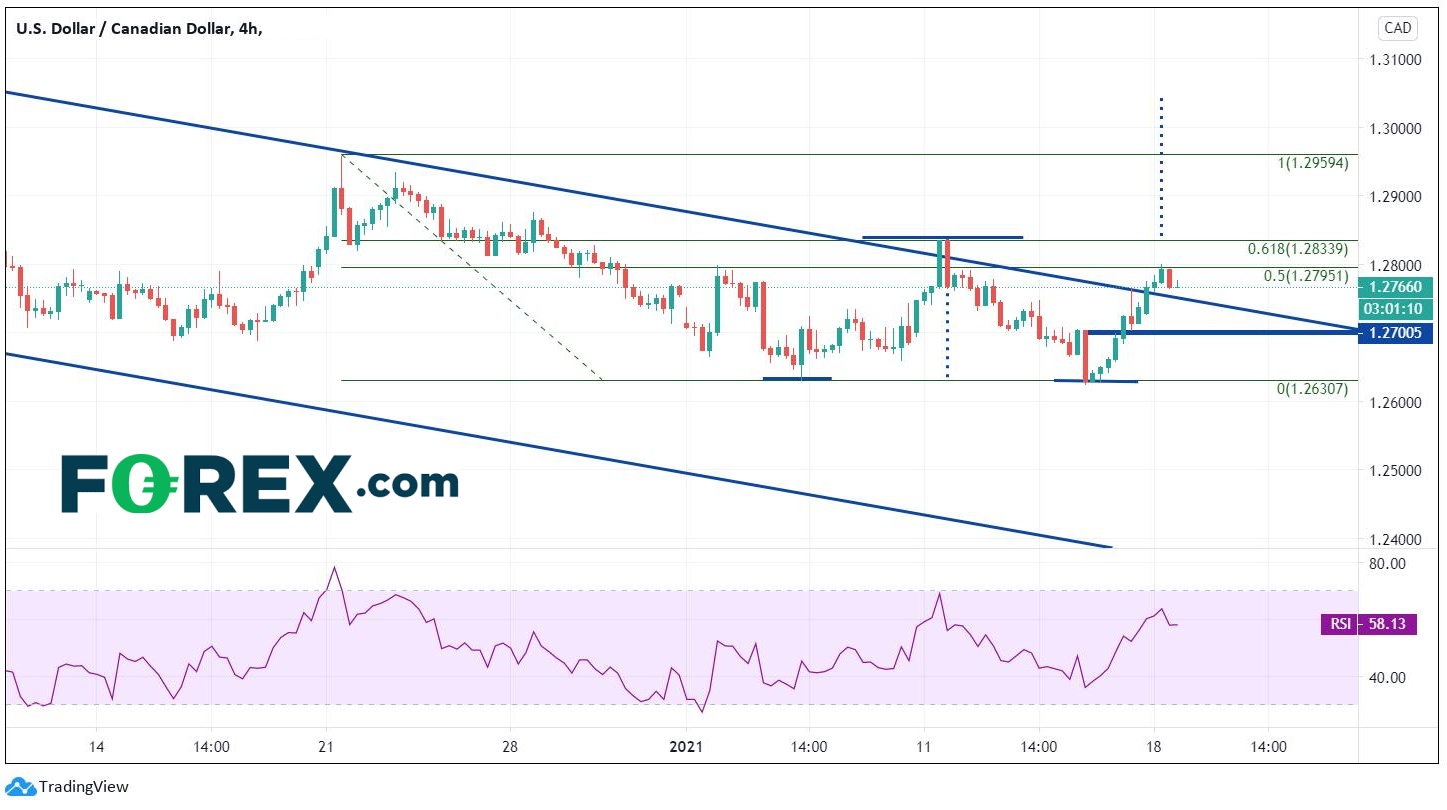 With Janet Yellen’s confirmation, PMIs, the BOC meeting, and Joes Biden expected to rescind the Keystone XL pipeline permit, there could be some opportunities for volatility in USD/CAD this week. 1.2840 will be key for the pair this week!