Currency Pair of the Week: USD/TRY

For all that has been said and done over the last few weeks, the US Dollar index (DXY) has been relatively rangebound since the beginning of March.  Despite the extremely dovish FOMC meeting, rising interest rates, and increasing inflation expectations, the DXY has remained between 91.00 and 92.00 since March 4th.  The $1.9 trillion stimulus package has been signed, sealed, and (almost) delivered.  The Fed is determined to keep monetary policy extremely accommodative until they see “actual” data that the economy is recovering, not just forecasts.  They are committed to buying $80 billion of Treasuries and $40 billion of MBS a month.  According to Fed Chairman Powell, this will not end soon.  Bond markets are calling his bluff, as interest rates continue to rise. This week, Powell and Treasury Secretary Yellen will testify in front of the Senate and Banking Committee and the House Financial Services Committee on the heath of the US economy.  In addition, Treasury auctions this week include the 2-year, 5-year and 7-year notes.  Recall it was the poor 7-year auction on February 25th which was the catalyst for liftoff in bond yields (which brought the US Dollar higher).  Traders will be watching the testimony and auctions for further guidance to the US Dollar this week.

Last week,  the Central Bank of the Republic of Turkey (CBRT) held their latest Monetary Policy Meeting.  As a result of increasing inflation in Turkey (CPI was 15.6% in February), the central bank surprised markets and raised interest rates 200bps from 17% to 19%.  Expectations were only for a 100bps increase. The year end CPI target for the CBRT is 9.4%. CBRT governor Naci Agbal felt the 200bps was necessary to help the central bank bring inflation lower towards achieving its goal. He has vowed to get inflation down to 5% by 2023. The only problem with this is that President Erdogan has been an outspoken critic of high interest rates.  Therefore, as a result of the large increase in interest rates (and after only 3 months on the job), Erdogan fired Agbal. He was replaced by Sahap Kavcioglu, who is a former banker, lawmaker, and most importantly for Erdogan, someone who believes that higher interest rates will not solve Turkey’s inflation problems. On a 240-minute timeframe, USD/TRY is currently holding horizontal support from the highs before the CRBT meeting at 0.7825.  Below there is additional horizontal support near 7.6363 and then the gap fill from Friday’s close down at 7.2189. 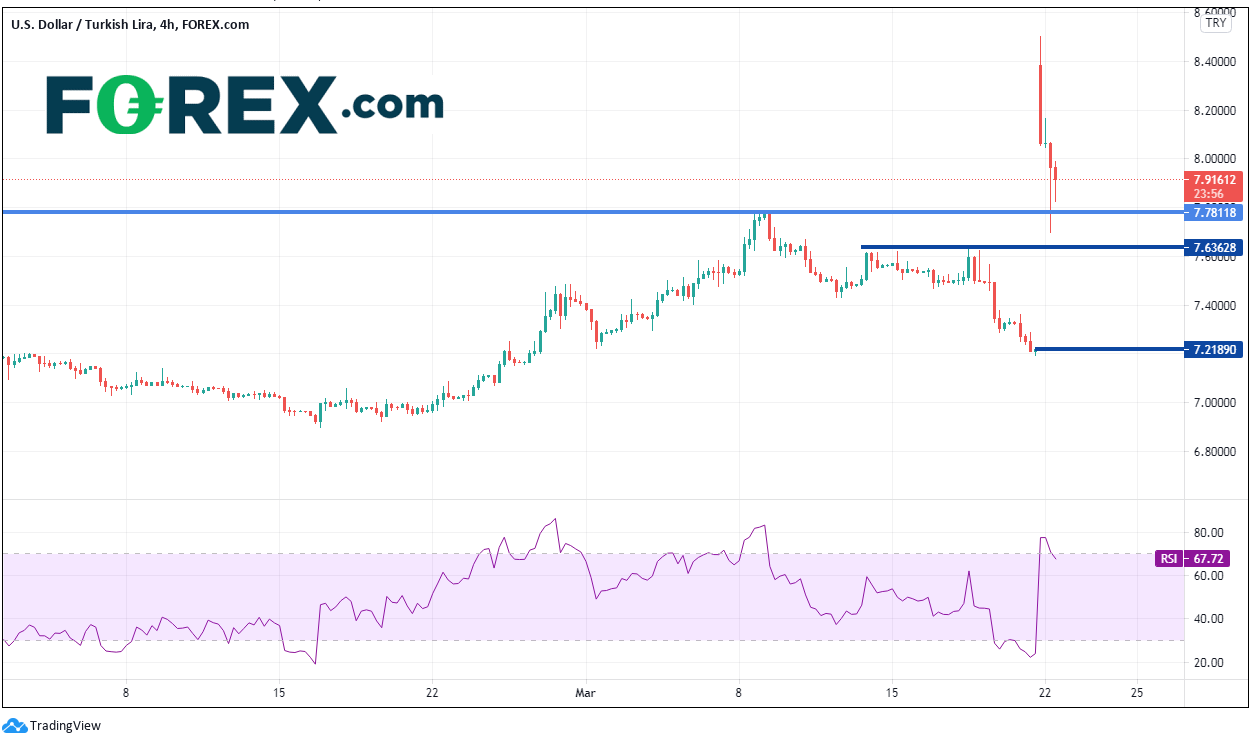 USD/TRY may be volatile this week as the markets try and figure out what to make of new CBRT Governor Kavcioglu and what exactly he will do if inflation continues to rise.  Neither he, nor Erdogan, are a fan of higher interest rates, so Kavcioglu will have his work cut out for him to find ways to lower inflation!