ECB’s policy statement will be published at 12:45 BST, but it will be during President Mario Draghi's press conference, which starts at 13:30 BST, where we may see the fireworks.

This week’s main event for a lot of traders is upon us: The European Central Bank is set to announce its latest interest rate decision later. The euro, stocks and gold should all move sharply. ECB’s policy statement will be published at 12:45 BST, but it will be during President Mario Draghi's press conference, which starts at 13:30 BST, where we may see the fireworks.

While we think there won’t be any change of policy at this meeting, there’s a growing risk that the ECB may deliver a surprise rate cut thanks to a deteriorating Eurozone economy and weak inflationary pressures.

Indeed, after a very poor showing from the manufacturers yesterday, when the the latest sector PMIs came out below expectations with the German manufacturing contracting at its weakest pace in over 7 years, this morning we had more bad news from the Eurozone’s economic powerhouse. The German Ifo Business Climate Index, which is based on surveyed manufacturers, builders, wholesalers, services, and retailers, came in at its weakest level since April 2013. The July print of 95.7 was also weaker than 97.2 expected.

So, heading into the ECB meeting it is reasonable to expect some sort of easing to be announced at this meeting, although it is more likely that the central bank may prepare the markets for easing in September instead.

Such dovish expectations have pushed government bonds across the Eurozone higher and yields to extremely low levels. Yesterday, for example, the 10 year Greek yield plunged below 2% for first time ever. And today, the entire Swiss yield curve has fallen into negative territory! Yes, that includes the 50-year yields as well, which has fallen below 0% for the first time since August 2016.

With government bond prices rallying as investors try to front run central banks, higher yielding stocks remain supported for now and more gains could be on the way should the ECB deliver what the markets demand: more QE.

Ahead of the ECB decision, the DAX was actually on the back-foot. But it has gained strong bullish momentum this week after ending lower in the past two weeks. So today’s weakness may prove to be temporary. However, if the ECB disappoints given the very high expectations then this week’s entire gains could be wiped out quickly. 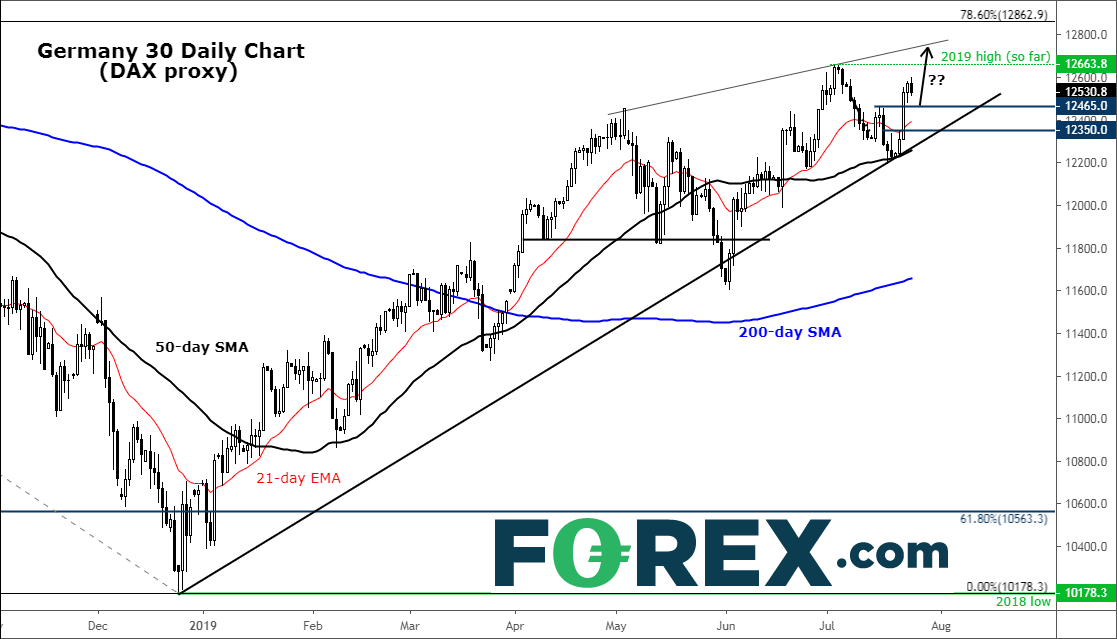