Following last week’s sizeable rally, the DAX has been unable to add to those gains for the last few trading sessions, keeping the German benchmark index within its existing range.

Following last week’s sizeable rally, the DAX has been unable to add to those gains for the last few trading sessions, keeping the German benchmark index within its existing range. But it could be a matter of time before the index breaks out to a new high — not just for the year, but also to a fresh record peak.

Global equities have been rising over the past several months owing to optimism over a US-China phase one trade deal. This looks set to be sealed and signed on Wednesday. It will just be a formality because the news has already been priced in. But the fact that the Trump administration has decided to lift its designation of China as a currency manipulator is an important change. This should help with the phase two of the negotiations that are set to get underway as soon as phase one is signed. Indeed, there will be a real urgency from China to end its damaging trade war with the US after fresh data revealed its trade with the largest economy dropped nearly 11% last year.

Meanwhile, stocks could find additional support should the fourth quarter earnings results turn out to be better than expected. Reports will start coming in from today with US banks Citi, JP Morgan, Goldman Sachs and Bank of America all due to report over the next two days.  Earning results from JP Morgan and Citigroup, released a few moments ago, both beat expectations, although Wells Fargo disappointed. Thanks to historically low interest rates, analysts are not expecting great numbers from the sector. While analysts’ expectations could be met, the downbeat expectations mean they could easily be beaten, too. As my colleague Ken Odeluga reported earlier, there are reasons to be bullish on the sector - HERE is why.

While the focus will be on US bank stocks with the earnings season there having officially started — and European peers don’t start reporting until the end of the month — I wanted to focus on the DAX index given its potential for a big technical breakout. The German index has been supported above all by the ECB’s extraordinary loose monetary policy stance. Expectations of a rebound in exports to China, with the latter expected to end its trade war with the US, has also boosted export names. Meanwhile Eurozone data has shown slight improvement in recent times, suggesting a recession could be avoided. 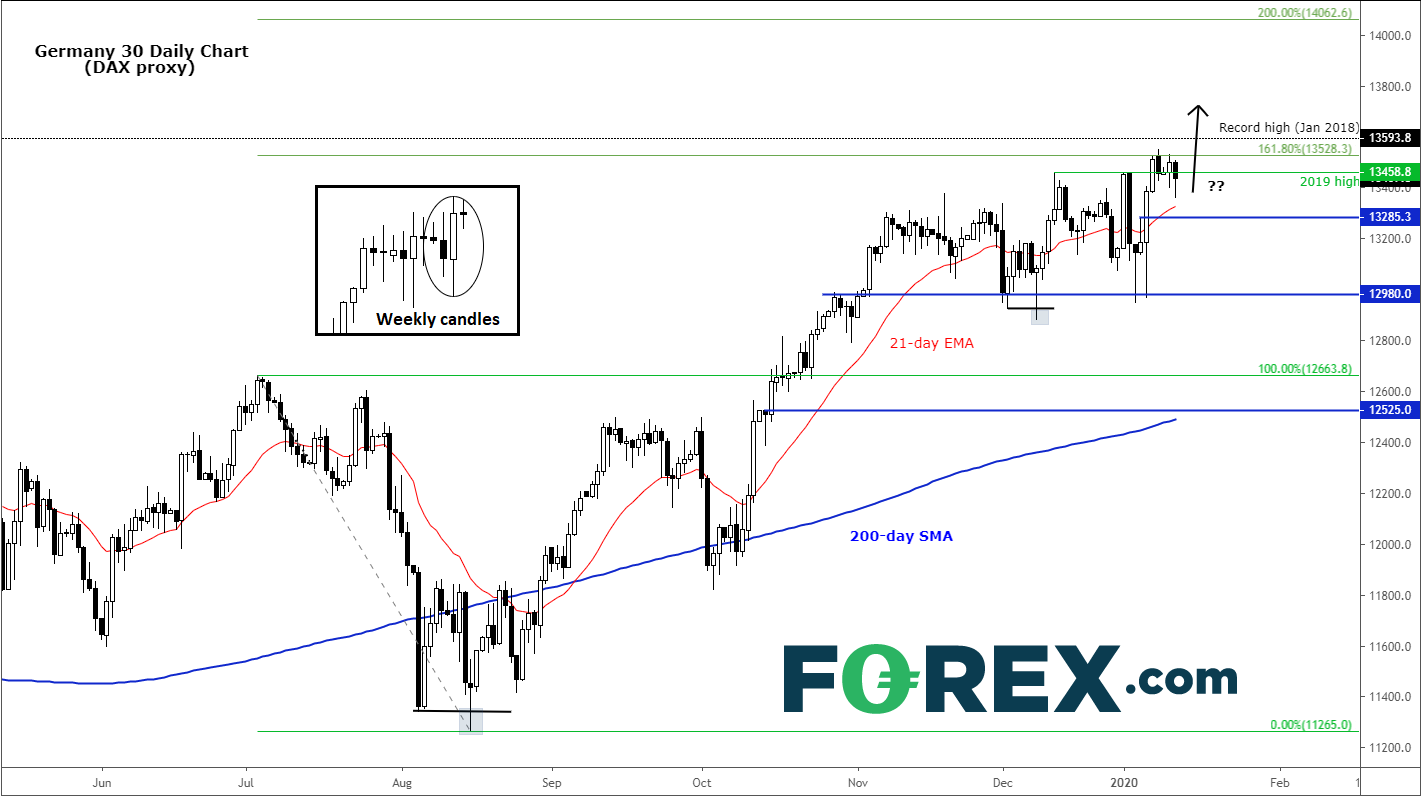 After last week’s bullish outside candle, the DAX has spent the first half of this week in consolidation mode. But the pressure is building for a potential breakout that could take the index above its previous record high (13593) hit in 2018. With the index holding near its recent highs, the technical outlook thus remains bullish - unless and until it creates a key reversal pattern or breaks and holds below an old low (such as 12980).