DAX: Should EU investors worry about US tax reform uncertainty?

After yesterday’s big sell-off, a lot of people would be wondering if this is the start of something big, a long-overdue correction or a mere short-lived pullback in what has been a very strong bullish trend for the stock markets.

After yesterday’s big sell-off, a lot of people would be wondering if this is the start of something big, a long-overdue correction or a mere short-lived pullback in what has been a very strong bullish trend for the stock markets. Apparently, investors are worried about the lack of any significant progress on tax reform in the US. While this could impact shares on Wall Street, should investors elsewhere be necessarily worried? With the US being the world’s largest economy, one cannot ignore its stock market. Equally, one should be warry of overstating the importance of the tax reforms in the US as there are bigger forces in play – for example ongoing support from global central banks in the form of extremely low interest rates and QE stimulus programmes . So far every pullback has been bought as investors continue to expect interest rates will remain low for a long period of time, which should keep the appetite for higher-yielding stocks high. In Europe, stocks haven’t been as racy as those on Wall Street. The markets here may have a lot of catching up to do over time as the Eurozone economy continues to improve. So, I am not convinced the markets in Europe have topped out yet. But sentiment is understandably downbeat following the recent drop. As a result, we could see further short-term losses before the longer term bullish trend probably resumes.

That being said, the DAX has now filled both of the gaps that it had left behind following the big breakout in October which continued in early November. So, it may be ready to take off again without suffering further losses. In any case, this week’s retreat can only be viewed as a normal pullback in what still is a very strong trend. Indeed, no major support levels have been taken out yet. What’s more, not only has the index been making higher highs and higher lows, its major moving averages are all trending higher, with price accelerating away from slower-moving averages like the 200-day. Though this may mean the odds of reversion to the mean is increasing, I would maintain my bullish stance on the DAX unless the last swing low around the 12930/50 area breaks down. Some short-term levels to keep an eye on are as follows:

As the trend is still bullish, I am expecting the resistance levels to break and support levels to hold. But if the market decides to take out supports rather than resistances, I may have to drop my still bullish view. When the market talks, one needs to listen. 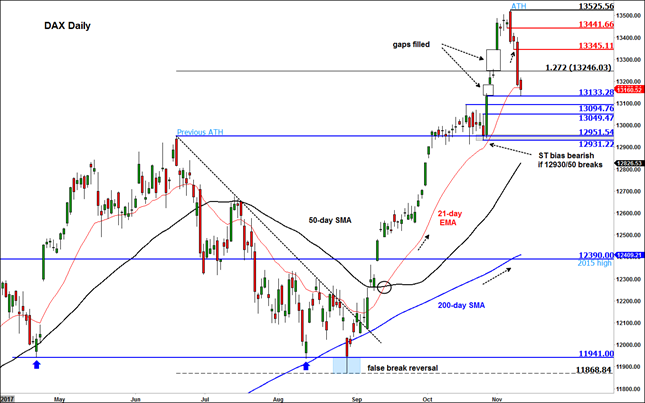