This week’s eagerly anticipated fundamental event was the US jobs report for the month of December, which was released today. The report showed a few surprises, but failed to cause any major immediate reaction in the dollar, gold or indices.

This week’s eagerly anticipated fundamental event was the US jobs report for the month of December, which was released today. The report showed a few surprises, but failed to cause any major immediate reaction in the dollar, gold or indices. Although the headline number of jobs gained disappointed at 156,000, the upward revision to the prior month’s total and the stronger-than-expected 0.4% month-over-month rise in average hourly earnings meant that it was a decent report overall. The dollar thus strengthened slightly, despite the headline NFP miss. It is worth noting that the headline miss was at least partially priced in after the ADP private sector payrolls report and the employment sub index of the ISM Services PMI both disappointed yesterday. Thus we wouldn’t be surprised if the dollar were to make a more meaningful comeback later on in the afternoon.

Now the EUR/USD has been very stubborn in not wanting to head towards parity. Earlier in the week, we pointed out the possibility for a bounce around the 1.0350 handle which came to fruition. The strength of the bounce from here has surprised me. Once again, the EUR/USD has managed – dare I say, easily – to climb above the 1.0525 level, thus regaining 1.0460, which was the low from the year 2015. If we are to see parity in the coming weeks, the sellers will need to exert some pressure and push the EUR/USD back below 1.0460, ideally 1.0350 either this week or next week. But if they fail to do so then get prepared to potentially see a sharp recovery. The bulls will need to see a weekly close above 1.0525, or ideally 1.0660 (either this or next week) before the long-term technical bearish bias turns neutral or becomes invalidated altogether. It is therefore worth watching price action closely around these levels and until things become clear, traders will want to be nimble. 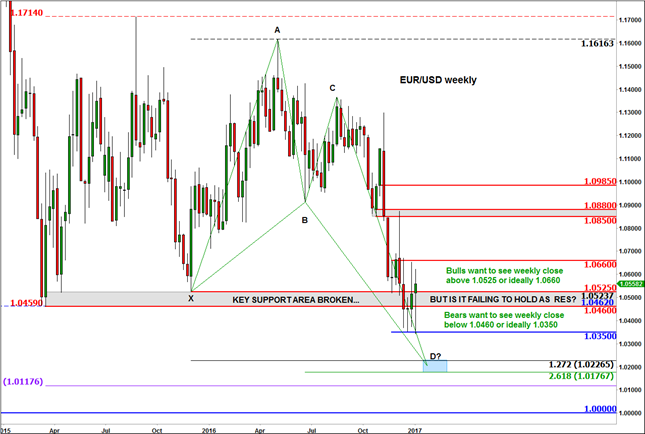