Did China Call Trump’s Trade Team? Why it Ultimately Doesn’t Matter for Traders

Whether China’s top policymakers called to restart trade talks or not is irrelevant for short-term traders.

It’s certainly been a busy morning for traders following the latest developments in the US-China trade saga!

The minute the FX market closed for the weekend, President Trump announced a 5% hike in existing and announced tariffs Friday evening, leaving traders the whole weekend to digest the developments. When the markets reopened for this week, there was a decidedly risk-off tone to trade, with US stock indices trading down another 1% and USD/JPY hitting its lowest level in nearly three years near 104.50.

However, we’ve since seen a big U-turn in the markets this morning after President Trump declared that China called “our trade people and said let’s get back to the table.” He went on to note that the calls had taken place “at the highest level” and that “anything’s possible” when asked if he would delay tariff increases on China.

The only issue? According to China, no such high-level talks took place.

Taking a step back, whether China’s top policymakers called to restart trade talks or not is irrelevant for short-term traders. In essence, there are two possible scenarios at play:

Either way, the developments are bullish, at least in the short-term, for risk trades (global equities, oil, and trade-sensitive currencies like the Australian dollar).

Time will tell if this weekend’s developments mark a turning point in the nearly 2-year-old tit-for-tat exchange of tariffs or not (and we’re certainly skeptical given past “breakthroughs”). But one thing is absolutely clear: President Trump is hyper-focused on the performance of the stock market, and he’ll say or do anything within his power to avoid a bear market in the run-up to the 2020 Election.

While we’ve seen a big outbreak in volatility this month, highlighted by three 2%+ down days, the Dow Jones Industrial Average has held a relatively tight range between 25,400 and 26,400 over the last three weeks. This week marks the proverbial “end of summer” doldrums, when many traders try to take one last vacation away from their desks, so we wouldn’t be surprised to see the range hold for another week (pending trade developments).

A bullish breakout, perhaps driven by verifiable progress in trade talks between the US and China would open the door for a retest of the summer’s highs at 27,400. For the reasons we outline above, a downside breakout may be short-lived, with potential for a move down toward 24,700 before the bullish rhetoric (and actions) out of the White House start trying to put a floor under stocks. 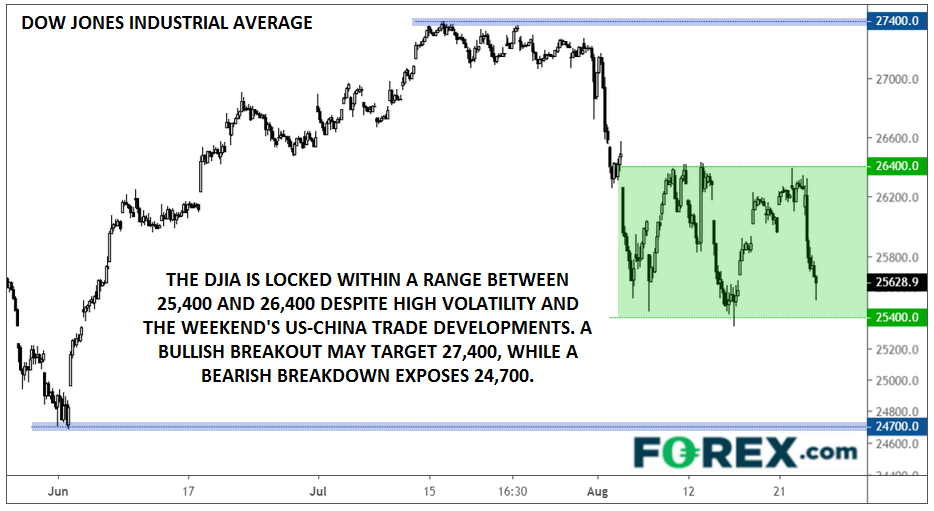