Directionless gold off lows ahead of FOMC

The small rebound in the dollar is the reason why after rising for two straight weeks, gold has pulled back a little so far this week. Evidently, investors are exercising caution ahead of the Federal Reserve rate decision.

The insatiable appetite for risk has seen US stock indices repeatedly hit new record highs this year, causing the VIX to drop to levels not seen before the financial crises. Against this backdrop, one would expect gold to remain largely out of favour. However, the metal’s ability to hang around in the middle of its wide $95 range between $1200 and $1295 for most of this year is, well, remarkable. Admittedly, the buck-denominated precious metal has been underpinned at least partially by a depreciating US dollar. If the US currency were to start appreciating again and the appetite for risk remained strong, then gold would most likely fall. Conversely, further falls for the dollar and/or a stock market correction should send gold higher.

Indeed, the small rebound in the dollar is the reason why after rising for two straight weeks, gold has pulled back a little so far this week. Evidently, investors are exercising caution ahead of the Federal Reserve rate decision. I think some investors are probably thinking that a dovish statement is what most people expect to see and that this may be priced in. So, the real surprise would be if the Fed turns out to be more hawkish than anticipated. If so, this could boost the dollar and weigh on gold.  Given this uncertainty, speculators have evidently reduced their short dollar and long gold positions.

Nevertheless, we haven’t seen any clear signs to suggest gold is about to head in one or the other direction in a decisive way: it remains a range bound market for now. The apparent “double top” that was created at $1295 still looks suspicious to me. If it was indeed a reversal pattern, why has gold been able to retrace more than 50% of its decline since the top was formed? If anything, gold looks more bullish than bearish at the moment, for it looks like the sellers are trapped. If they, are where would they be placing their stops? I think big buy stop orders are resting above that double top at $1295. The cluster of orders there may attract price towards it, like a magnet. 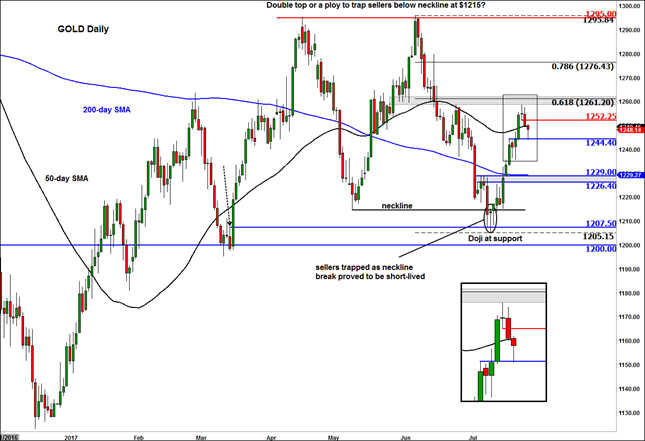