Disney Q2 earnings preview: where next for Disney shares?

It has been a tough year for Disney, but the strong growth of its streaming services twinned with the recovery potential of its theme parks makes the stock one to watch as the global economy reopens.

When will Disney release its Q2 results?

Disney will release second-quarter results after the markets close on Thursday May 13, 2021.

Disney earnings consensus: what to expect from Disney’s results

The pandemic has thrown both disruption and opportunity at Disney. On one hand, it has forced its theme parks and resorts to close or operate at minimal capacity while forcing its cruise ships to stay docked and media productions to be halted. On the other, there has never been greater demand for Disney’s world-renowned content, demonstrated by the fact its streaming services like Disney+, Hulu and ESPN+ have signed-up almost 150 million subscribers since the company made its big push into the arena back in 2019.

The overall effect has been negative and both revenue and earnings have come under strain over the past year. In addition to the billions in lost revenue, it is also forcing Disney to spend big – up to $1 billion in the current financial year – on making its operations safe for staff and customers.

A Reuters-compiled consensus shows analysts are expecting Disney’s revenue and earnings to come in lower compared to both the previous quarter and the year before. Revenue is forecast to come in at $15.87 billion with adjusted EPS of 28 cents and reported diluted EPS of 1 cent.

Can Disney’s streaming services keep up the momentum?

Disney’s streaming services are closely watched as the company hopes they can be a primary driver of growth going forward. Revenue from its direct-to-consumer division that homes these services grew 73% in the fourth quarter of 2020 and investors will want to see that trend continue.

The main number to watch out that is likely to grab the headlines however is subscriber numbers. Disney+ had just under 95 million subscribers at the start of the year and we know that topped 100 million by early March, an impressive start considering it was only launched in late 2019. ESPN+ had just over 12 million subscribers and there was 39.4 million people signed up to Hulu.

Disney has a chance to impress after its main rival Netflix disappointed three weeks ago. Netflix added 4 million net paid subscribers in the first quarter, way below the 6 million expected by analysts. What was more worrying was the warning that it only expected to add 1 million net subscribers in the second, less than a quarter than what the market was hoping for. Disney still trails Netflix’s 208 million global subscribers but has not been wasting any time in closing the gap.

Strong subscriber growth later this week would be evidence that Netflix is starting to feel the pressure from the increasing competition in the market, including from Disney. However, if Disney’s subscriber figures also underwhelm then it could be a signal that growth is slowing across the industry, possibly because they are starting to spend more time outside as lockdown restrictions are eased. This means Netflix shares are also worth watching when Disney releases its results.

Investors will be hoping the addition of Star, which brought a slew of new TV series to the platform, and Star Wars Day on May 4 will have attracted more people across its international markets.

When will Disney’s parks and resorts recover?

Disney’s parks, hotels and cruises have been the worst-hit by the pandemic as they have been forced shut for most of the last year. Although some sites remain closed and the ones that are open are operating at severely reduced capacity, the outlook is brightening as lockdown restrictions are being eased. The business will not be able to recover until restrictions are eased and it can start to welcome a serious number of visitors back, so the focus is on how strong forward bookings are and when sites can start operating at more normal capacity levels again.

Disney has acknowledged that this relies on how quickly countries can carry out their vaccination programmes, which is varying from country-to-country. Things are likely to remain tough for the time being, but Disney’s parks and resorts make it a prime candidate to benefit as the global economy reopens.

The same applies to cinemas, which have also reopened at reduced capacity but should be able to welcome more guests over the coming months. This should give Disney the distribution channel it needs for its big films after releasing a number of blockbuster titles on its streaming platform whilst theatres were closed.

After surging across the pandemic, the Disney share price struck resistance at $203 the all time high in early March.

The price has been trending lower since, trading below a descending trend line whilst finding support at $178.

The price trades on its flat 20 & 50 EMA on the daily chart and the RSI is also neutral ahead of the earnings release.

Any weakness in the numbers or the outlook could see the share price move lover. Sellers may look to wait for confirmation of a move below support at $178 for a deeper selloff towards $160 the yearly low.

On the flip side, upbeat numbers could boost the share price with buyers looking for a move above the descending trendline and horizontal resistance at $190 for the bulls to bring $200 back into target. 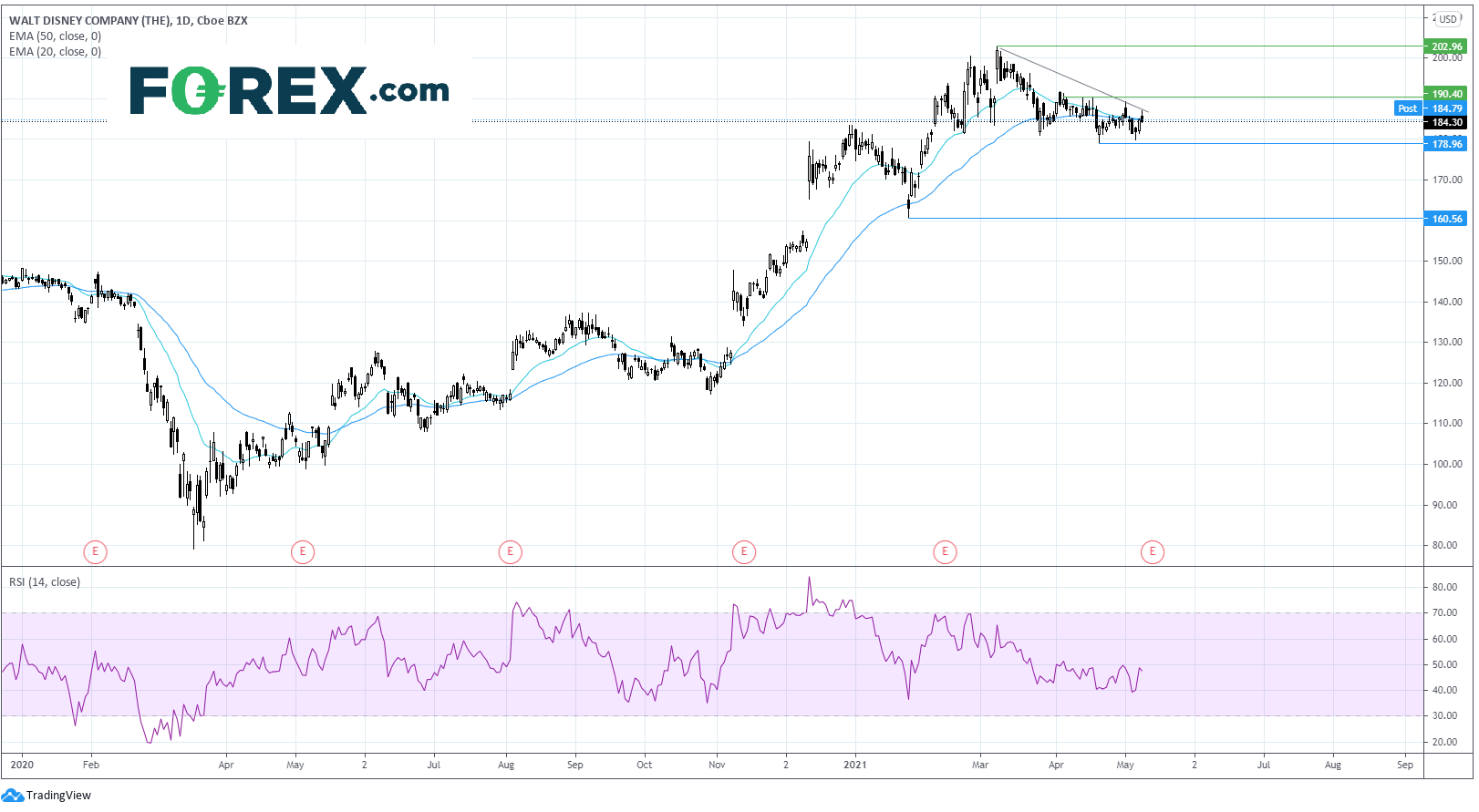