The technicals point to a possible lower move in yields and USD/JPY in the short-term, regardless of the outcome

Recall last month when the US released CPI for May and the print was 5% YoY.  The markets didn’t know what to think:  expectations were already extremely high at 4.7% YoY, and 5% was over the top.  Inflation was here to stay!  That was on June 10th and 10-year yields were trading at 1.53%.  At time, the Fed was arguing that inflation was transitory. But at the Fed’s June FOMC meeting a week later, the dot-plots caught traders off-guard as the Fed seemed to agree that tapering may need to begin sooner than later.  Inflation at 5% is much higher than the Fed’s targeted rate of 2%.  10-year yields are currently at 1.366%.  USD/JPY, which trades similar to US yields, closed June 10th at 109.31.

On July 13th, the US will release CPI for June.  Expectations are for 4.9% YoY.  Since the last Fed meeting, speakers have been mixed with some calling for tapering sooner than later. June’s Non-Farm Payroll number was strong, with 850,000 jobs added to the economy.  However, last week, bonds moved higher while yields and USD/JPY moved lower.  10-year yields moved from 1.447% down to 1.25% before profit taking ensued on Friday.  This was the lowest level for yields since mid-February!  USD/JPY sold off from a high of 111.19 on the NFP release down to 109.53 on Thursday, before recovering on Friday.  So, after a strong NFP print, yields and USD/JPY fell.  This is exactly the opposite of what one may have expected if the Fed was going to begin tapering.

There are a few reasons this may have happened:

On a 240-minute timeframe the move off the lows on Friday appears that it may be corrective, as yields formed a pennant pattern.  If 10-year yields break back below 1.343% (the bottom of the pennant), they could target 1.149%, which wouldn’t do any damage to the longer-term technical picture (see daily chart).  However, yields first must break the July 8th lows of 1.250% and the 38.2% Fibonacci retracement level at 1.227%. Resistance is at the upper trendline of the pennant near 1.394% and the July 6th highs at 1.447%. 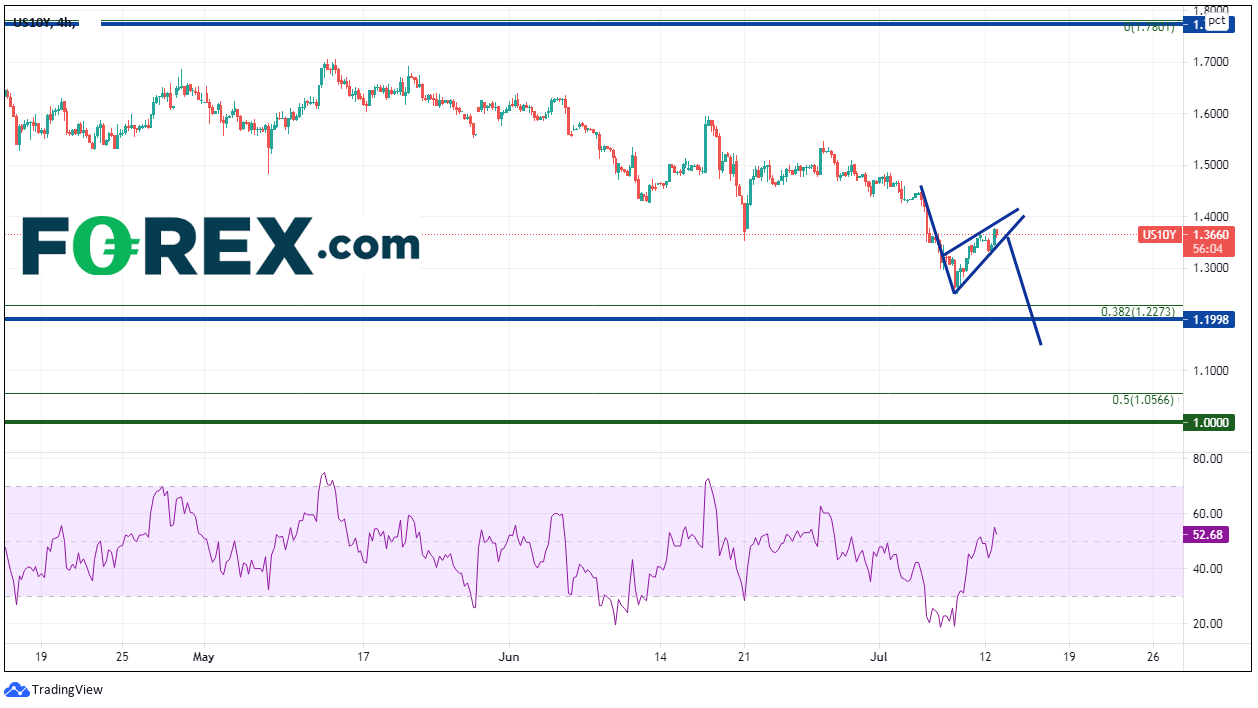 USD/JPY is similar to 10-year yields on the 240-minute chart.  The pair traded above the end of March highs (110.97) into the payroll release.  Notice the RSI was overbought on the NFP print, and the pair began moving lower with yields.  The bounce off of 109.53 on Friday appears to be corrective as the pair forms a pennant (notice the RSI was oversold).  A break below 110.00 would target 108.00.  The 38.2% Fibonacci retracement from the March 2020 lows to the July 2nd highs doesn’t cross until 107.51.  As with yields, if price reaches target, it will not have done damage to the longer-term technical picture. 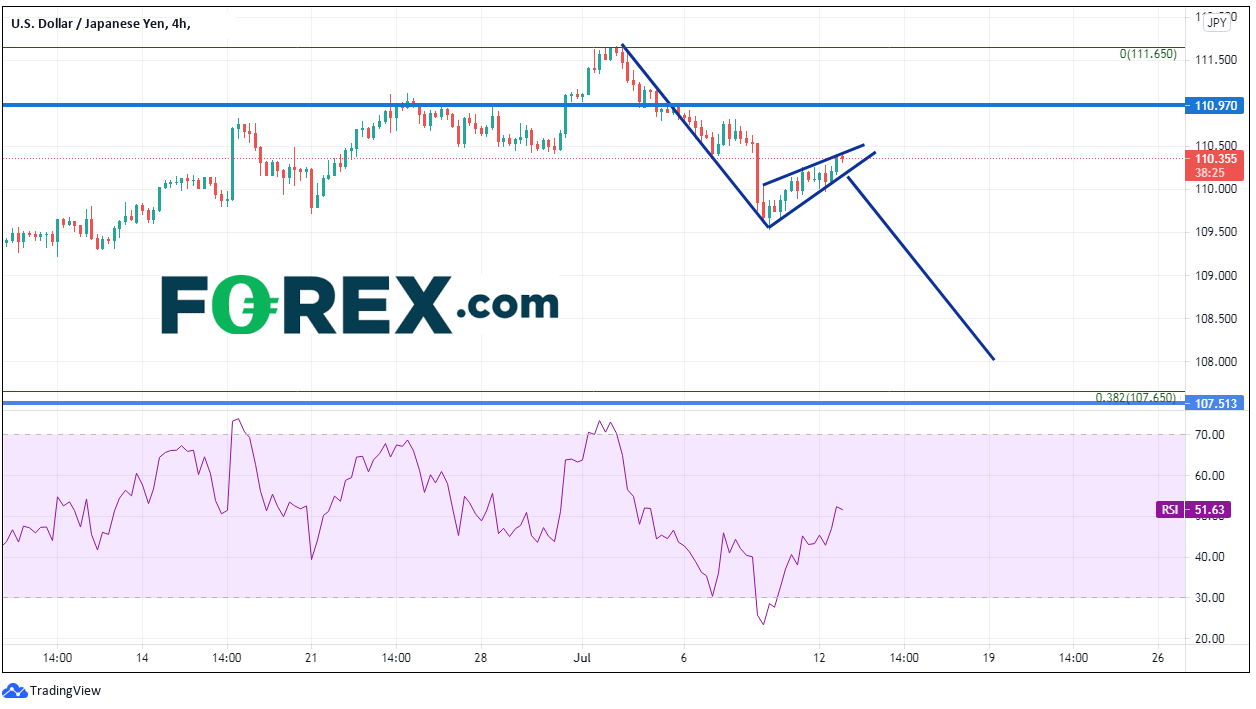 The selloff in yields and USD/JPY could be because of any or all the reasons listed above.  However, note that the longer-term technical picture has not been damaged and there is still plenty of room to go before that may happen.  Does it matter if the CPI is stronger or weaker than expected for June?  The technicals point to a possible lower move regardless of the outcome in the short-term.  However, that may not be the case for the longer-term picture!

How to trade with Forex.com