Dollar at critical juncture ahead of US inauguration

Just a couple of days before Donald Trump’s inauguration as US president, the dollar is on a modest rebound but still generally under pressure amid a pullback that has been in place since the beginning of the new year. The dollar’s initial reaction to Trump’s November election was highly positive due in large part to expectations of higher US economic growth and interest rates under the new administration. The start of 2017, however, has begun to bring some doubts about Trump’s policy implementation and the possibility of trade wars resulting from his highly protectionist trade stance.

Just a couple of days before Donald Trump’s inauguration as US president, the dollar is on a modest rebound but still generally under pressure amid a pullback that has been in place since the beginning of the new year. The dollar’s initial reaction to Trump’s November election was highly positive due in large part to expectations of higher US economic growth and interest rates under the new administration. The start of 2017, however, has begun to bring some doubts about Trump’s policy implementation and the possibility of trade wars resulting from his highly protectionist trade stance.

The near-term trajectory of the dollar will depend largely on the path of economic growth under Trump and the resulting interest rate landscape going forward. While the Federal Reserve was cautiously more hawkish late last year in view of Trump’s aggressive fiscal stimulus plans, it remains to be seen if or when Trump will make good on key aspects of his promised agenda.

Complicating matters further for the dollar, Trump’s unpredictability was highlighted once again over the past weekend when he said in an interview that the dollar was too strong, particularly against the Chinese yuan. This helped prompt a sharp dollar sell-off on Tuesday. Generally, the run-up to Friday’s presidential inauguration has been characterized by markets being pulled back and forth amid policy confusion and mixed anticipation over the incoming administration. This confusion has been exacerbated by impromptu tweets and comments directly from the president-elect.

At least until markets get a better sense for how the new Trump Administration will perform after inauguration, and how the Fed may move forward as a result, current pressures on the dollar could continue for the time being.

From a price perspective, as mentioned, the dollar has been entrenched in a pullback since the beginning of the new year. On the USD/CHF chart, this has resulted in a clean breakdown below the key 1.0100 level to hit major psychological support back down at parity (1.0000). In the process, the currency pair has also just broken down below a rough head-and-shoulders reversal pattern, a typically bearish indication. Currently trading just above parity, USD/CHF could potentially be pressured further in the near-term to break down below 1.0000. In the event of such a breakdown below parity, the next major downside target is at the key 0.9800 support level. 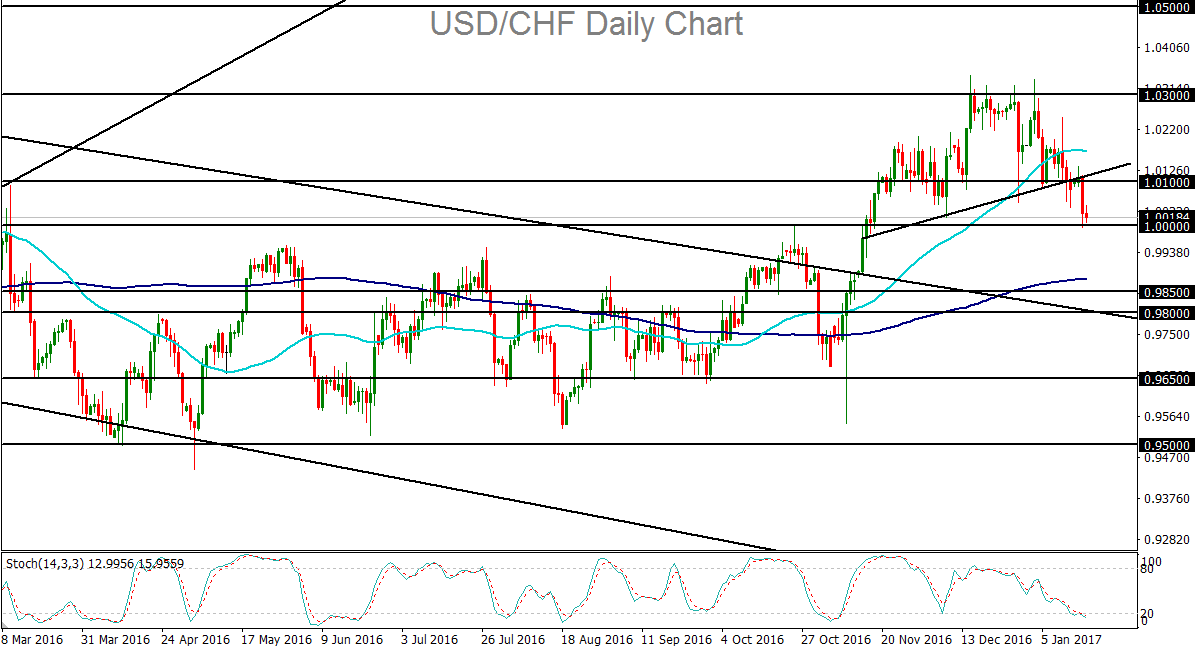