The US dollar has been stuck trading in a narrow range for several weeks now after a significant correction since the start of 2017 came to a halt.

The US dollar has been stuck trading in a narrow range for several weeks now after a significant correction since the start of 2017 came to a halt. Market participants have been considering whether the greenback has depreciated more than it should have given the still-positive fundamental backdrop. In February, the Dollar Index had halted a sharp three-month slide. However, last week’s gains were not enough to ensure of a positive end for the month of March. So, the index still remains in the negative territory three months into 2018. At the moment, support from high expectations for further monetary policy tightening from the Fed has been offset by ongoing political pressures and global trade uncertainties. Relative strength in rival currencies, including both the euro and yen, have also helped to keep the dollar pressured, while weakness in commodity currencies have helped to support the greenback. The dollar’s latest attempt to recover was halted most recently and ironically by the Fed. Although the FOMC forecasted higher economic growth and interest rates going forward, its tepid outlook for inflation along with its unchanged median estimate of only two more rate hikes in 2018 precluded the dollar from rallying out of its prolonged slump. Let’s now hope that Friday’s jobs report will trigger a decisive move in the dollar in one or the other direction.

From a technical point of view, however, we can observe a few bullish indications around the long-term pivotal level of 88.50 which had been a significant resistance on the historical charts. This level has so far held its own and we have had a nice reaction from it already back in the middle of February when it created a bullish reversal pattern in the form of an engulfing candlestick here. The dollar index has since made a higher high, which unfortunately did not hold for too long as price then pulled back. However, now it may have created a higher low around 88.95 (as noted on the chart). This could be significant as it suggests that the sellers are losing control.

So, the dollar looks like it is trying to establish a base here and in the event it breaks through upcoming resistance area between 90.50 and 91.00 then we could see the start of a sharp move up towards at least the next trouble area at 91.90-92.50. Meanwhile the next support comes in at 89.63; below here there’s not much further support until that 88.50 level. 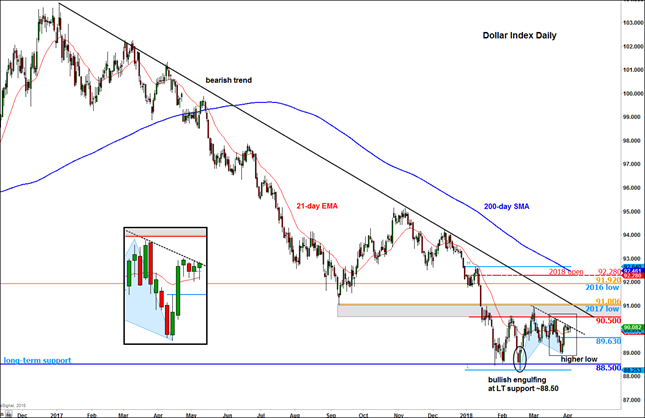