As we transition to the latter parts of the working week, the focus will be shifting towards OPEC and oil prices, as well as the US economy with Friday’s jobs report set to take centre stage.

Market update: As we transition to the latter parts of the working week, the focus will be shifting towards OPEC and oil prices, as well as the US economy with Friday’s jobs report set to take centre stage. Elsewhere, the pound remains in focus as we get closer to the December 12 UK snap election. Sterling’s ongoing rally prevented the FTSE from staging a similar rebound we saw in other global stock markets yesterday. Today, the FTSE fell again, and US equity markets struggled shortly after the open amid confusion over the US-China trade situation and concerns over valuations.

Dollar under pressure: The surging British pound has also helped to keep the Dollar Index under pressure, now down for the fifth consecutive day. The buck has also been undermined by a rallying Canadian dollar after the Bank of Canada’s hawkish rate hold the day before. Also pressuring the DXY is the euro, which pushed higher today despite poor European data as Eurozone retail sales and German factory orders both fell more than anticipated. If stock markets were to fall further then the yen may strengthen on haven demand, which could provide the final nail in the coffin for the Dollar Index.

NFP eyed: The dollar will be impacted more directly from US data tomorrow when the nonfarm payrolls report is released. My US colleague Matt Weller will be posting an NFP preview article shortly on our website. But if jobs disappoint and disappoint badly, then the markets may start to price in a sooner-than-expected rate cut in 2020. However, a surprisingly strong showing could help alleviate the pressure currently being exerted on the buck.

Dollar Index breaking down: Thanks to the surging back of the above foreign currencies, the DXY has been trending lower since peaking in early October at just shy of 100.00. On Friday of last week, the DXY made a distinct lower high in the form of a false break reversal above a short-term peak. As result of that false break out attempt, we have seen continued falls throughout this week. The index has now broken below a short-term low and also the 200-day moving average. At the time of writing, the DXY was around 35 points shy of taking out the old lows around 97.10. Standing in the way of that liquidity pool was short-term support around 97.45. So, this 97.45 level needs to give way if we are to see the DXY take out 97.10, and in the process form another lower low. I think it may be only a matter of time before that low is taken out, judging by recent price action. 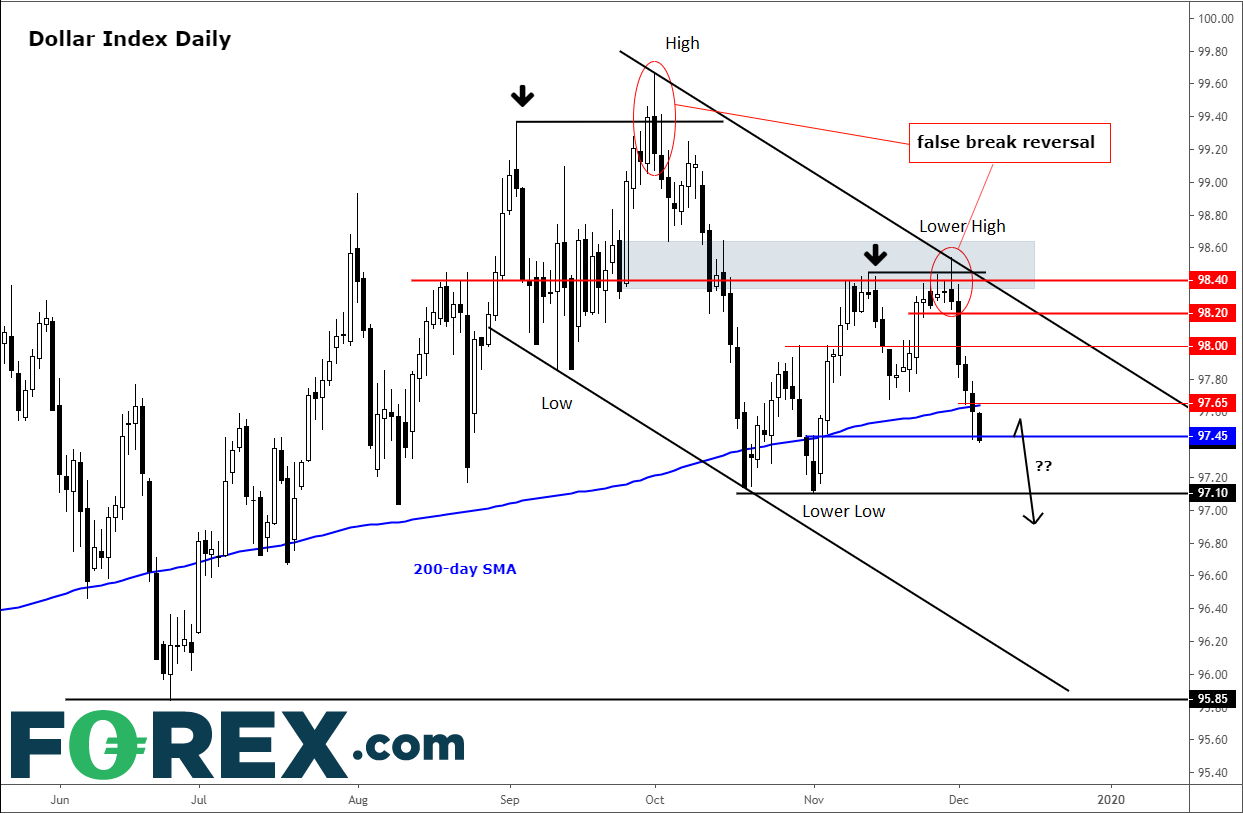