The dollar has remained bid against most currencies post Friday’s US jobs report.

The dollar has remained bid against most currencies post Friday’s US jobs report. The greenback rose on Friday in reaction to the mixed-bag nonfarm payrolls report which showed a weaker-than-expected headline number, but that was offset by positive revisions to the previous reports and a decent but expected rise in average hourly earnings figure. The dollar has risen particularly sharply against the euro and pound, which haven’t been helped by weakness in data and ongoing uncertainty over Brexit.

The euro fell on the back of news German factory orders slumped 4.0% in June compared to a smaller 0.4% decline expected. The slump in orders was driven by a drop from non-Eurozone countries and comes on the back of a rise of 2.6% in May. Meanwhile German construction barely grew last month as July construction PMI printed 50.0 vs. 53.0 expected.

In the UK, sentiment remains downbeat as fears over a no-deal Brexit rises – causing the GBP/USD to fall to a new 11-month low, despite BoE’s rate hike last week. The latest pounding of sterling comes after Liam Fox, the UK’s trade secretary, said that there is a 60% chance that Britain will leave the EU without a deal.

While the dollar’s trend is clearly bullish, we do think that there is a good chance it may be in for a potential correction soon. The positivity surrounding the US economy and in turn the Fed’s potential rate hikes are probably priced in, or very close to being so. This raises the prospects of profit taking after the dollar’s extended run – if not against all foreign currencies, there are a handful of currencies which have shown relative strength of late such as the Canadian dollar and the Japanese yen.

The Canadian dollar has been supported by a hawkish central bank and firmer oil prices – although today it has fallen after Saudi Arabia said it was freezing all new trade and investment relations with Canada and gave Canadian ambassador to Riyadh 24 hours to leave the kingdom. This was in response to Canada’s call for the release of anti-government activist Samar Badawi.

The USD/JPY was also higher at the time of writing but the yen was stronger against other major currencies. The yen has been among the strongest of currencies in G10 of late as speculators try and test the limits of Bank of Japan’s commitment in allowing yields to move more flexibly after the central bank said it would tolerate moves in the 10-year JGB yield of about 20 bps from its zero per cent target. This has caused the yield differential between the US and Japan to tighten, resulting in a small pullback in the USD/JPY exchange rate in the second half of last week.

The yen has also found some support from risk aversion owing to concerns over trade wars. Worries over a fresh round of trade rhetoric between the US and China hit Chinese equities overnight. This came after President Donald Trump claimed the US was winning its deepening trade war with the world’s second largest economy. China, on Saturday, threatened retaliatory tariffs on $60bn of imports from the US.

While we are on the lookout for a dollar correction, so far it has not broken down any major technical levels to trigger that move. In the case of the USD/JPY, the pivotal level is around 110.80, the base of the last breakout which took place on July 11. A potential daily close below this level could be the trigger the sellers are waiting for to see. While it holds above this level, the USD/JPY retains its bullish bias and as such we wouldn’t rule out the possibility of a strong rally, particularly given the positive sentiment on Wall Street despite all the doom and gloom out there. 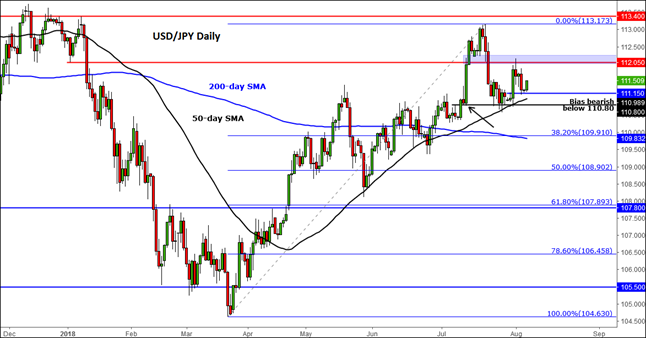