Let’s make no mistake about it: today’s not going to be the most important day of the week. It will be Wednesday and Thursday when most of this week’s action will likely take place, with several central bank meetings and top tier economic data to look forward to.

Let’s make no mistake about it: today’s not going to be the most important day of the week. It will be Wednesday and Thursday when most of this week’s action will likely take place, with several central bank meetings and top tier economic data to look forward to. Specifically, it will be the Federal Reserve rate decision on Wednesday which may cause the most volatility in the financial markets compared to other central banks that will be making their own decisions a day later on Thursday. The Fed is almost certain to raise interest rates but what we don’t know is the type of signal it will send to the market with regards to the future pace of rate hikes. A hawkish signal could underpin the dollar while a dovish indication could undermine it, at least in the short-term anyway. To some degree, the Fed’s choice of policy wording may depend on the outcome of the February Consumer Price Index measure of inflation, which will be released earlier in the day on Wednesday. Meanwhile the Bank of Japan, Bank of England and Swiss National Bank are all expected to remain on hold at their respective meetings on Thursday. On top of these central bank meetings and some key economic data releases, the Dutch elections on Wednesday and the possibility of the UK government triggering the Brexit Article 50 this week means heightened political risks are additional risk factors that may move the markets this week.

Ahead of the above fundamental events, the US dollar is trading little-changed at the start of this week. Last week, the greenback ended lower against a basket of foreign currencies, despite a strong monthly jobs report. Among other currencies, it was the euro which inflicted the most damage to the Dollar Index (DXY). The single currency climbed as the European Central Bank president Mario Draghi said that the risk that the Eurozone economy could fall into deflation has receded, indicating that the bank’s next move may be to reduce policy accommodation. The USD/JPY could weaken further this week should the Bank of Japan also gives indication of further alleviation in its QE programme. As far as the Fed itself is concerned, in the event that the FOMC delivers a policy statement and press conference in line with the expectations, or slightly dovish, then it may cause the dollar to stage a correction of some sort. Otherwise the greenback may resume its long-term upward trend.

From a technical perspective, the DXY remains above the key long-term support at around 100 but below short-term resistance at 101.05. The definition of the path of least resistance thus depends on one’s trading time frame. While the DXY could very easily extend its gains in the long-term, there is potential for a short-term correction towards, if not below, the long-term bullish trend line at around 99.00 this week. Last week, the dollar broke its short-term uptrend (as shown in the inset), resulting in the formation of a pin bar candlestick pattern on its main weekly chart. If the dollar now breaks below short-term support at 101.00 then we may see the start of a notable move to the downside. Conversely, if last week’s high (around 102.25) breaks then this would invalidate our short-term bearish bias, as it may trigger a short squeeze rally towards and maybe beyond this year’s high. 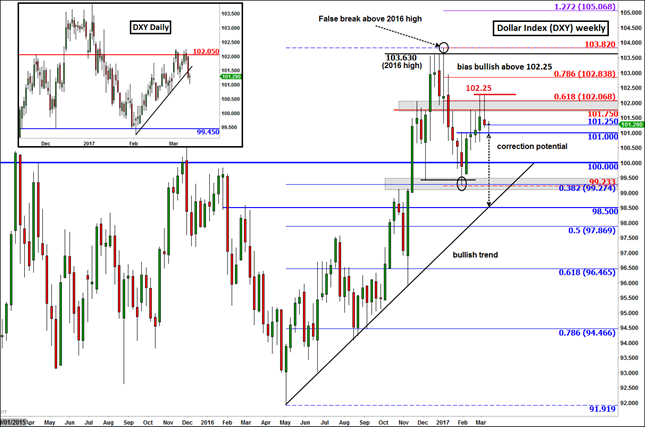