The dollar remains the king of FX – a frail one but a king nonetheless. While it may not necessarily surge to new multi-year highs soon, it is unlikely to fall off a cliff either. At the moment though the greenback still remains in a short-term correction mode.

The US dollar fell across the board last week. A so called 'dovish rate hike' from the Fed disappointed those looking for hints of a more aggressive policy tightening cycle. Instead, the FOMC reiterated its previous view that there may be two further rate rises coming up this year and the Fed Chairwoman Janet Yellen echoed that view at her press conference. Two rate rises will probably still be more than any other major central bank would, but the point is that those rate increases are at least partially priced in and the dollar may therefore struggle to appreciate further. That's unless of course there's marked improvement in incoming US macro data, particularly wage inflation. But if global data improves at a faster clip than the US, then that may also limit the dollar's upward potential. Ultimately, however, the dollar remains the king of FX – a frail one but a king nonetheless. While it may not necessarily surge to new multi-year highs soon, it is unlikely to fall off a cliff either. At the moment though the greenback still remains in a short-term correction mode.

Therefore and as we had expected at the start of last week ahead of the Fed meeting (details HERE), the dollar may extend its short-term declines further, before it stages a meaningful comeback. While that is our base case scenario, we are always wary of the importance of the 100 level on the Dollar Index, a level which had been strong resistance in the past. So, a bounce of some sort at 100 would not come as a surprise to us either. But we think that the DXY may be in for a slightly deeper correction, before it bounces back. Perhaps, it will dip towards the 200-day moving average and bullish trend line at 98.50/70 area or maybe even a little bit deeper towards the Bullish Gartley pattern around the 97.35-97.60 range, and then start its next up leg.

In any case, a potential break above the short-term corrective trend line or ideally the last swing high at 102.05-102.25 area would signal the end of the downward trend and the resumption of the long-term bullish trend. 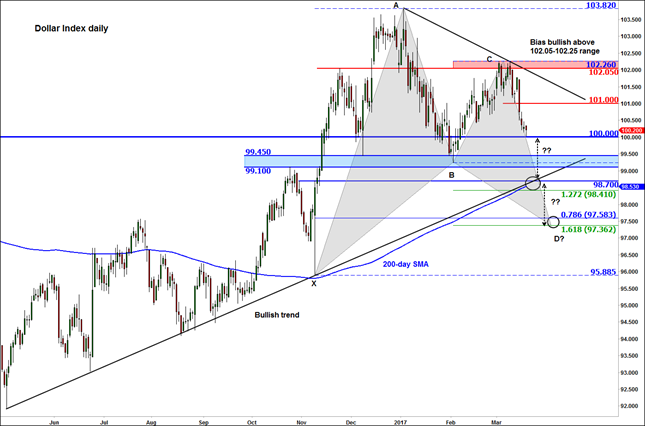